Detection of atmospheric-composition changes requires global atmospheric observations, continuous monitoring, and long-term instrumental stability on the order of 1% per decade. Meeting all requirements is impossible for a single measurement technique, but an integrated system can be employed instead. Observational networks of satellites, ground stations, balloons, and airplanes are used for global atmosphere watch. Careful instrumental calibration, comparison, and control have led to the assembly of a high-quality data set appropriate for climate-change research and data assimilation into atmosphere models. Here, we concentrate on results obtained from remote-sensing networks that are closely linked with the balloon network. 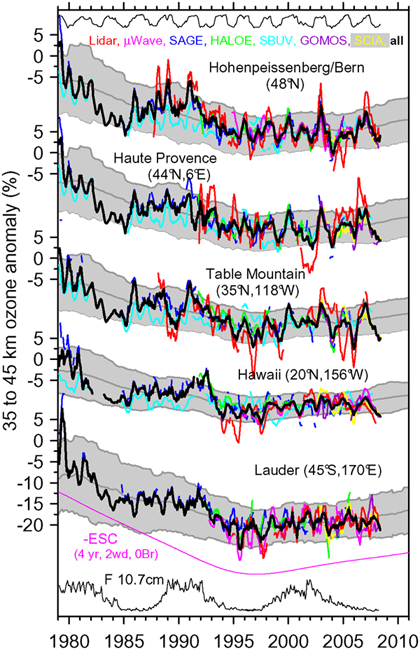 Trend studies are typically done for either single stations or a network employing a certain measurement instrument, such as an ozone sonde. Doubts as to the reliability of any retrieved trend remain, however, since a tiny instrumental drift or a systematic retrieval error can easily generate a trend with a statistical significance of 100%. We have analyzed time series of ozone at stratospheric altitudes (35–45km) observed by satellites and ground-based remote-sensing facilities (see Figure 1). Our combined analysis sets a new standard for future trend studies. Data from the various measurement techniques is archived by the Network for the Detection of Atmospheric Composition Change2 (NDACC), which was established in the 1980s when a dramatically increasing ozone hole over Antarctica was discovered. NDACC is linked to both the Global Earth Observation and Monitoring of the Atmosphere campaign3 and the Global Atmosphere Watch program.4 Our results show that the NDACC multi-technique and multi-network approach is efficient and reliable for both detection of atmospheric-composition changes and cross validation of satellite and ground-station measurements.

Since its discovery in the 1980s, a rapid increase of the size of the ozone hole was observed.5,6 Earlier model studies relating to atmospheric chemistry had warned that man-made emissions of chlorofluorocarbons (CFCs) could induce catalytic ozone destruction in the stratosphere.7–9 Although the cause of the ozone hole was at first controversial, the 1987 Montreal Protocol imposed a complete ban on harmful CFC emissions. Recent studies have simulated the catastrophe that might have occurred if CFC emissions had not been halted.10,11 The resulting stratospheric ozone decrease would have doubled the erythemal UV radiation (affecting skin conditions and blood vessels) on the surface at northern midlatitudes by 2060, and associated DNA damage would increase by approximately 650%.

The temporal evolution of effective stratospheric chlorine (ESC, caused by upward transport of CFCs) levels is shown by the smooth magenta line at the bottom of Figure 1, but with a negative sign. The positive ESC trend was reversed after establishment of the Montreal Protocol (with some delay), and the concentration of stratospheric chlorine has been decreasing slowly since 1996. The temporal evolution of stratospheric-ozone concentrations is tightly anticorrelated with ESC levels: stratospheric-ozone levels stabilized at a low level in 1995, after one to two decades of ozone depletion. A recovery phase of stratospheric ozone appears to have started in 1995 but we believe that it is still too early to be sure about this perceived trend.

Some atmosphere models predict stratospheric-ozone recovery until 2050.12 Other models predict a super recovery of stratospheric ozone, exceeding the 1970 mean value as a consequence of stratospheric cooling caused by human-induced global warming of the troposphere. Despite the good news implied by Figure 1, NDACC must remain focused on the global atmosphere watch of the ozone layer. The past decades of intense ozone research have made clear that stratospheric ozone constitutes a life-saving protection shield against harmful solar UV radiation. In addition, ozone plays a crucial role in atmospheric dynamics and energetics. The earth's climate system has been seriously disordered by man-made CO2 emissions as well as by human-caused stratospheric ozone depletion. The complex interaction between climate dynamics and atmospheric-composition change requires more observations and modeling.

Each remote-sensing technique has both shortcomings (e.g., stray-light or baseline biases, calibration errors, spectrometer degradation, retrieval issues, systematic data gaps) and strengths (e.g., absolute measurements, calibration free, all-daytime, all-weather capability, value for money). It is surprising that Figure 1 shows a consistent picture of the temporal evolution of stratospheric ozone across a number of different measurement techniques, ground stations, and satellites. To some extent, the measurements have been controlled by past comparison campaigns. In addition, the worldwide networks of Dobson-Brewer spectrometers and ozone sondes (in situ balloon measurements) play an essential role in harmonizing global ozone data. Note that satellite instruments must be calibrated on the basis of ozone sondes, airplane instruments, and ground stations. Satellites have global coverage but usually sample coarsely in local solar time. Thus, satellite networks cannot substitute for other networks, or vice versa.

We conclude that combined networks of ground stations, satellites, balloons, and airplanes are the best solution for a sustained global atmosphere watch of atmospheric composition. Improvements of NDACC are required for continued global atmospheric-composition monitoring with an accuracy of ~1% per decade. This will require ongoing measurement programs and careful improvements of existing instruments. New and future satellite instruments must be calibrated and integrated with existing data sets. Because of the continuing increase in CO2 levels, ozone recovery is expected to accompany a cooling of the upper stratosphere of approximately one degree per decade. Only satellites (and ground-based instruments such as the NDACC lidars) can reliably measure temperatures in the upper stratosphere. Remotely sensed temperature trends will therefore become a future focus of NDACC and the Global Atmosphere Watch.