A new algorithm enables rapid and accurate determination from space of forest disturbance on a regional scale.
12 June 2009
Wanting Wang and John Qu

Large-scale forest damage from hurricanes is a major problem for forest management in the southeastern United States, as such damage can increase the likelihood and severity of other forest disturbances, such as fires. In recent years, the frequency and severity of hurricane-induced wreckage has made the creation of a rapid and accurate system for regional forest-damage assessment important for supporting post-hurricane forest management and post-hazard relief, as well as for the removal of dangerous dead biomass fuels.1 We have developed a new algorithm for rapid evaluation of post-hurricane forest disturbances. Satellite remote sensing is particularly well suited for monitoring regional forest conditions, because it can partially overcome many of the difficulties faced by traditional methods.

Assessing the severity of damage in hurricane-impacted forest regions has traditionally relied on ground surveys, aerial photography, and combinations of ecological, storm, and topographic models. Only a few studies have focused on using satellite remote sensing. Most of the latter employed passive optical remote sensing and adopted the change or standardized change in various vegetation indices (VIs) as damage indicators. These studies have not evaluated the quantitative relationships between individual VIs and ground-observed forest damage, or compared their respective performance. We evaluated commonly used VIs, and developed and validated an algorithm to rapidly assess the severity of forest damage that does not rely on ground observations.2 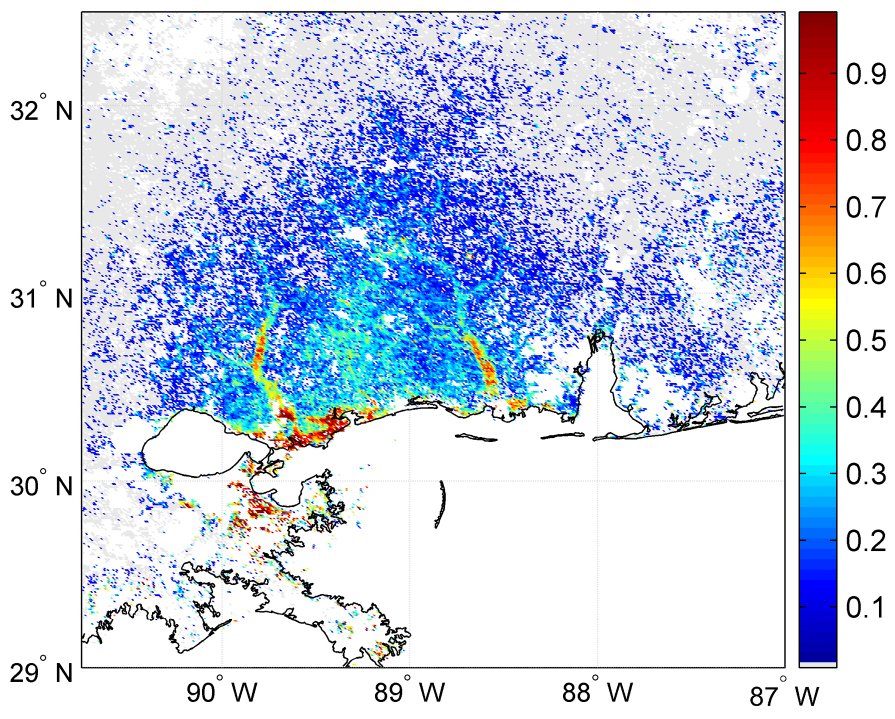 We compared VI maps before and after hurricane Katrina (ΔVIs2005)—which showed the relative reduction in vegetation—with the US Department of Agriculture's Forest Service damage assessments.3 We found that ΔLAI2005 and ΔFpar2005 were unable to identify most of the damaged forest regions. Further comparison of ΔVIs2005 with the indices derived from observations of the same impacted region in 2003, 2004, and 2006 demonstrated that ΔNDII detects forest damage better than ΔEVI and ΔNDVI in terms of total damaged forest and ability to indicate damage severity.

We subsequently developed a rapid post-hurricane forest-damage-assessment algorithm using ΔNDII as the key indicator and used it to estimate forest damage after hurricane Katrina. Figure 1 illustrates forest damage on a scale from zero to one. The areas represented by the light gray pixels exhibit no damage, while the blue, green, yellow, and red pixels represent damage from light to most severe. Although this map provides detailed information at the nominal 1km2/pixel level, forest managers may need more general information. We thus used the algorithm's initial output to create a map of more general damage levels (see Figure 2)—scattered light, light, moderate, and severe—to aid forest managers in determining where post-hurricane forest management or other relief are most needed. 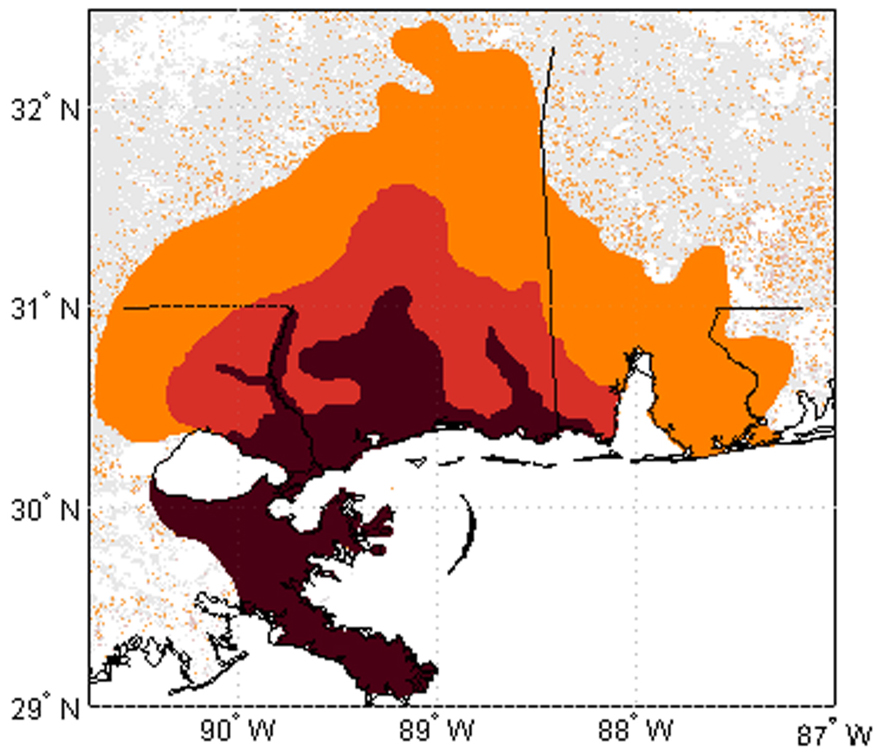 We validated our algorithm using the Forest Inventory Analysis ground-truth data.4 The scatter plot in Figure 3 shows a linear relationship between ΔNDII2005 and total damage severity observed by ground inventory. The linear fit was y=a+bx, where a=−0.01, b=1.06, r2=0.79 (correlation coefficient), the standard deviation is 0.03, and the p value <0.0001. For quantitative measurement purposes, this indicates that a strong linear relationship exists between ΔNDII and forest-damage severity. 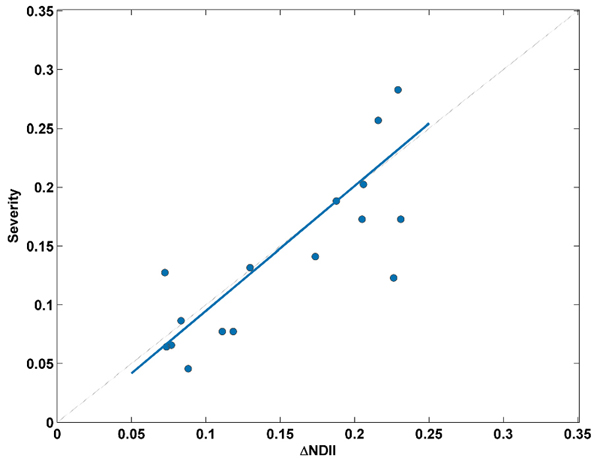 Figure 3. Relationship between the change in the Normalized Difference Infrared Index (ΔNDII) and the total severity of damage to the forest. The linear fit is almost 1:1 (represented by the dotted line), which validates the algorithm.

Our algorithm offers a new approach for rapid assessment of post-hurricane forest damage on a regional scale. It can provide decision support for forest managers with timely information, better accuracy, higher resolution, broader spatial coverage, and lower cost than traditional approaches. We will next explore high-resolution optical satellite observations and data fusion with MODIS measurements to improve the algorithm's accuracy.