Characterization and correction of abnormal optics in the human eye

In 1994, Liang et. al. adapted Shack-Hartmann wavefront sensing (which was first developed for astronomy) to measure optical imperfections in the focusing elements (cornea and lens) and media of the human eye.1 Since then, reliable measurement of the ocular wave aberration has improved our understanding of the eye's optical quality and made it possible to correct these aberrations using adaptive optics, laser refractive surgery, or customized ophthalmic lenses. Correcting the aberrations provides improvement in visual performance substantially beyond what is possible with conventional correction methods (spectacles and traditional contact lenses). However, much of the work in this field has been limited to normal eyes, despite the fact that even greater visual benefit can be achieved when correcting aberrations in eyes having abnormal corneal conditions (such as in patients with corneal transplants or keratoconus, a degenerative disorder).

The Shack-Hartmann wavefront sensor focuses light on the back of the eye (retina), which subsequently reflects back through the optical media and emerges as a wavefront. A series of small lenslets images the wavefront and records it as an array of small spots on a CCD. By measuring the x- and y-displacement of these spots from a reference, we can reconstruct the wavefront. Despite the automation this device provides, previous studies were limited to normal eyes because the wavefront sensor had an inherent limitation on the maximum measurable aberration amplitude (referred to as the dynamic range). Both the size of the lenslets and the focal length of the lenslet array affect the dynamic range. The larger the size of the lenslets (i.e., the lenslet spacing), the more dynamic range the sensor will have. Likewise, the shorter the focal length of the array, the greater the dynamic range is. However, increasing the lenslet spacing or shortening the focal length comes with costs, namely decreased lateral (or transverse) resolution of the reconstructed wavefront and poorer measurement sensitivity (smallest measurable change in wavefront slope).2

Figure 1. (a) Schematic of the large, dynamic-range Shack-Hartmann wavefront sensor. The pupil, translatable plate, and lenslet array are all conjugate with one another. (b) Moving the translatable plate allows light from all of the lenslets to be collected over four separate images.

To characterize the aberrations in two groups of abnormal eyes (keratoconic and corneal transplant patients) over a larger pupil size than 6.0mm in diameter, we modified a Shack-Hartmann wavefront sensor to give it increased dynamic range without sacrificing measurement sensitivity (that is, the focal length of the lenslet array did not change).3 The hardware modification required the addition of a translatable plate that contains holes exactly the same size as the lenslets, but spaced so that only every other lenslet is exposed at any given time. The lenslet array and translatable plate were conjugate with the pupil so that they were superimposed optically (see Figure 1a). Translating the plate to each of four possible positions allows us to capture information from all of the lenslets (see Figure 1b). The plate is translated mechanically so that all four images are acquired in approximately 470ms. Follow-up studies ensured that acquisition times as long as 1410ms produced reliable results.

We measured 33 abnormal eyes (19 with keratoconus and 14 post-corneal transplant) over a 6.0mm pupil.4 We found that both populations had 5.5 times the higher-order aberration root mean square (HORMS) of normal eyes. Only 1 ± 1% of the total aberration in normal eyes was due to higher-order aberrations (those not correctable by spectacles or conventional contacts), whereas the contributions in keratoconic (KC) and penetrating keratoplasty (PKP), or post-corneal transplant, eyes were 16 ± 20% and 16 ± 13%, respectively. The largest aberration in KC eyes was vertical coma, and in PKP eyes, trefoil. Figure 2 compares the amplitude of the aberrations in the two abnormal groups to a control group of normal eyes. Overall, these findings confirm that the poor best-corrected visual acuity in these eyes is due to higher-order aberrations, correction of which should provide substantial visual benefit. 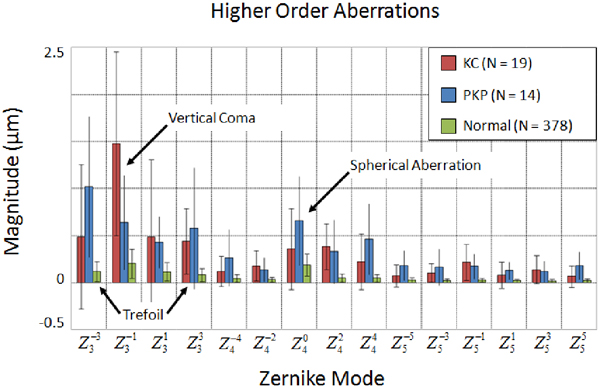 Hardware and software modifications to the Shack-Hartmann wavefront sensor have allowed us to precisely characterize aberrations in abnormal eyes. We used this information to verify that correcting these aberrations provides subjects with substantially improved visual acuity. However, we are still unable to achieve the visual acuities that optical theory predicts. Some of this discrepancy may be due to customized contact lens manufacturing errors and unpredictable changes in decentration and rotation of the lenses on the eye over time. However, recent evidence also suggests that the lower visual acuities these subjects experience may be due to the fact that long-term neural adaptation to poor retinal image quality may reduce neural sensitivity to high spatial frequencies.6 Future work will focus on better understanding the effects of neural adaptation on visual performance after customized vision correction as well as whether the neural system can be readapted to the improved optics of the eye to yield gradual improvements in visual performance.