Brain tumors (gliomas) are among the most challenging tumor subtypes. The location of a benign tumor in the eloquent areas of the brain could potentially render it inoperable, the presence of a blood-brain barrier limits the ability of systemically administered medications reaching the target site, and the intricate neuronal network makes targeted therapy challenging. For all ages and all brain-tumor types in the United States, the five-year survival rate is 20%, with the scale skewed towards poorer survival in patients with gliomas.1 For all primary (newly diagnosed) malignant brain tumors combined, the five-year survival rate in children younger than 14 years is 72%.2 Individual tumor characteristics (such as location, grade, histopathology, and recurrence) play a role in two- and five-year survival rates.

Photodynamic therapy (PDT) represents a paradigm shift in tumor treatment from more traditional resection and systemic chemotherapy methods. The principle behind PDT is light-mediated activation of a photosensitizer that is selectively accumulated in the target tissue (see Figure 1), causing tumor-cell destruction through singlet-oxygen production. The majority of PDT photosensitizers contain a heterocyclic ring structure similar to that of chlorophyll or heme in hemoglobin. Transfer and translation of captured light energy into chemical reaction in the presence of molecular oxygen produces singlet oxygen (1O2) or superoxide (O2−), and induces cell damage through direct and indirect cytotoxicity. Therefore, photosensitizers are the first critical elements in PDT procedures, and the activation procedure is the second step. 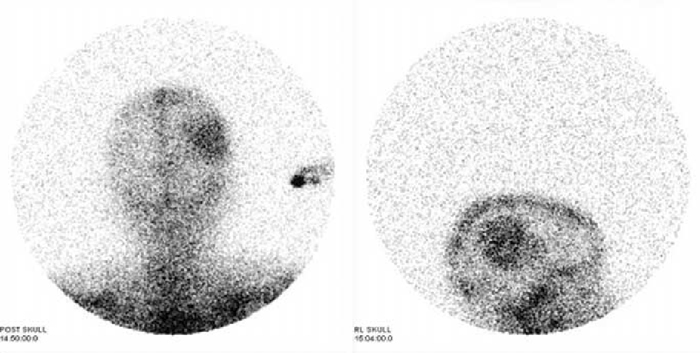 Figure 1. Twenty-four-hour impact of (radioactive) 111In-labeled Photofrin®. The panels demonstrate intense uptake in the anterior-posterior and lateral views of patients with anaplastic (malignant) ependymoma (one of the main tumor types).

Photosensitizers can be of three different subtypes: porphyrin or chlorophyll analogs, and dyes. Porphyrin analogs, such as porfimer sodium (Photofrin), are among the most common photosensitizers. Photofrin is usually used intravenously in doses ranging from 0.25 to 2.0mg/kg. It is preferentially taken up by tumor cells with evidence suggesting tissue concentrations of up to 12 times that of normal cells.3 The photosensitizer is usually injected 24 hours prior to activation and can be triggered by several different light sources. The preferred operating wavelength of 630nm is based on the sensitizer molecule's absorption peaks as well as the degree of penetration into brain tissue, which increases with increasing wavelength.

Light delivery to the tumor tissue can be accomplished using fiber optics (see Figure 2) that are directly inserted into the tumor, or with an inflatable balloon adapter (see Figure 3) placed into the resection cavity.4 The light source can be laser or LED based. We recently demonstrated the safety and tolerability of LED/laser-based photosensitizers for recurrent supra- and infratentorial (cerebrum versus cerebellum) tumors. We studied 20 patients with recurrent malignant brain tumors who received 22 PDT treatments. Sixteen tumors were supratentorial and four were infratentorial. All 20 patients underwent craniectomy (brain excision) or craniotomy (bone-flap removal) for PDT site access. 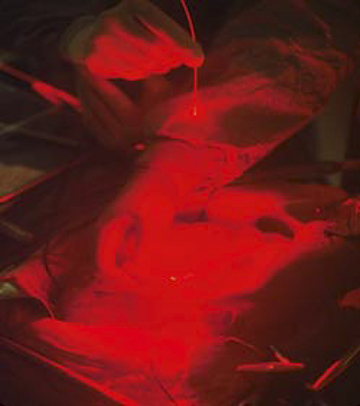 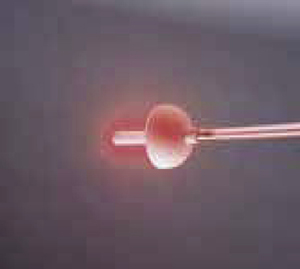 Patients received intravenous Photofrin for 24 hours prior to light exposure, starting at a dose of 0.75mg/kg. We used laser and LED arrays to deliver 100J/cm2 of light to the sensitized tumors. Fourteen patients received PDT with a laser-balloon adapter, two via interstitial optical fibers, and five had LED-based PDT. At the maximum Photofrin dose of 2.0mg/kg, five patients received laser-balloon-adapter light and five received LED irradiation. In addition, three patients received LED light with 0.25mg/kg of Visudine, a benzoporphyrin derivative (BPD).5 We carried out quantitative analyses of toxicity and time to progression. Two patients had toxicity consisting of ataxia (lack of muscle coordination) and facial weakness after treatment with interstitial fibers. Escalating doses of Photofrin were tolerated to the maximum dose of 2.0mg/kg. BPD did not result in additional toxicity. PDT in the posterior fossa (containing the brain stem and cerebellum) or near the eloquent brain was tolerated using either the LED or laser-balloon adapter. All patients exhibited tumor responses, as shown by the magnetic-resonance-imaging scans in Figures 4 and 5. The mean time to tumor progression after PDT was 67 weeks. 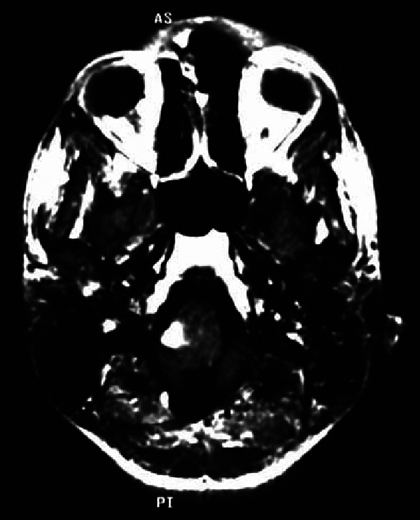 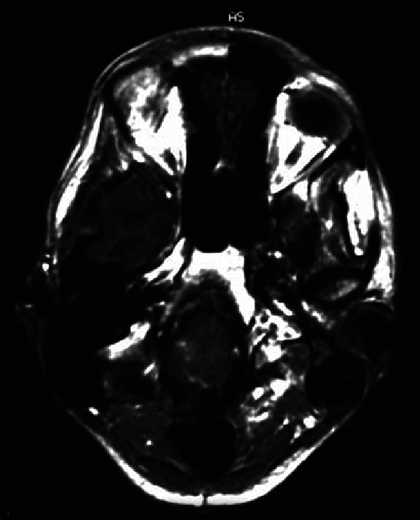 The side-effect profile resulting from our study is in the acceptable range, with two of the 20 patients developing neurotoxicity and, surprisingly, posterior-fossa tumor treatment was not associated with any increased likelihood of side effects. Other known side effects of PDT are ocular hypersensitivity and photosensitivity, as a result of which patients need to avoid direct sun exposure for 30 days post treatment to avoid further activation of residual drug traces. Thus, we conclude that the potential of PDT for benefit in refractory and recurrent brain tumors in eloquent areas is very promising.

A higher 230J/cm2 light/Photofrin-dose study6 records the survival of patients at the Royal Melbourne Hospital (Australia), using the Victorian Cancer Registry database for patients treated with adjuvant PDT following surgical tumor resection. For primary tumors, median survival from initial diagnosis was 76.5 and 14.3 months for anaplastic astrocytoma (AA) and glioblastoma multiforme (GBM), respectively. Seventy-three percent of patients with AA and 25% with GBM survived longer than 36 months. For recurrent tumors, median survival from the time of surgery was 66.6 and 13.5 months for AA and GBM, respectively. Fifty-seven percent of patients with recurrent AA and 41% with recurrent GBM survived longer than 36 months. Older age at the time of diagnosis was associated with poorer prognosis. Laser-light doses above the sample median of 230J/cm2were associated with better prognosis in the 136 patients studied. There was no mortality directly associated with PDT. Three patients had increased cerebral oedema that was thought to be related to PDT and was subsequently controlled with conventional therapies.

We are initiating a Phase I trial with 230J/cm2 of light to determine the maximum dose (from 0.5 to 5.0mg/kg) of Photofrin that can be tolerated with acceptable levels of tissue damage. This will also address the effect of PDT on supratentorial versus posterior-fossa tumors and attempt to assess time to progression and PDT survival benefits. For this trial, we require highly specialized laser technology. There is no Food and Drug Administration (FDA)-approved laser in the United States currently meeting our needs. However, we have obtained ‘Investigational New Drug’ approval from the FDA for our drug-device combination experimental-therapy research protocol. We will use the Melbourne system. A total light dose of 240J/cm2 is administered using sterile flat-cut 600μm quartz fiber into the Intralipid® bath. During irradiation, Intralipid is continually refreshed within the cavity. Most likely, the Intralipid spectrum will show little or no absorption at 630nm. Intralipid flow does not affect light transmission. If anything, it will minimize the effect of blood contamination (which would reduce light transmission at our operational wavelength) by constantly replacing contaminated with fresh Intralipid.

The Melbourne group took cavity size into consideration. They calculated the cavity's surface area, measured the light output at the tip of the fiber, and calculated the dose per unit surface area, based on the size of the surgical cavity. We modeled the light's tissue-penetration depth by assuming that the 4W 630nm laser fiber is placed at the approximate center of the surgical cavity, upon which photoillumination commences (see Figure 6). We will calculate the laser exposure time needed to deliver the required light dose based on the size of the post-resection cavity. 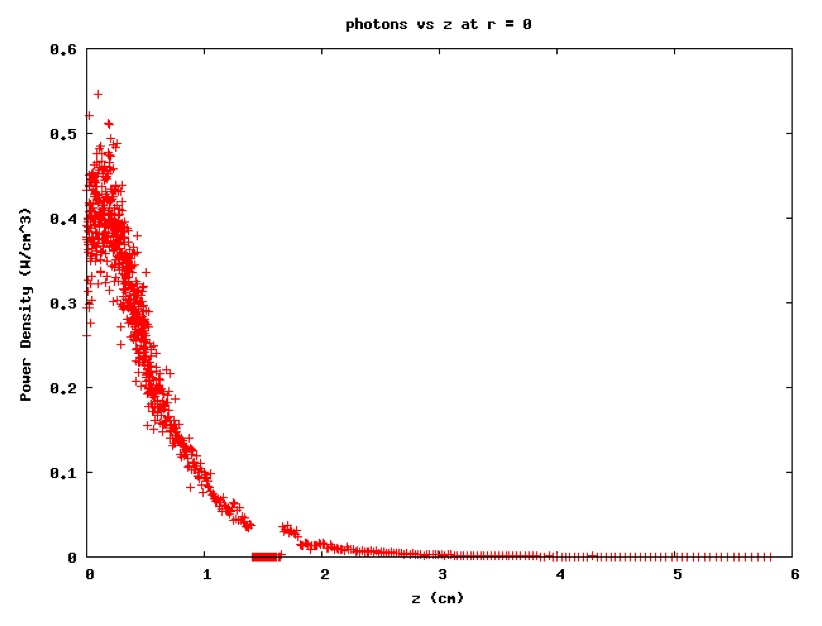 Harry Whelan is the Bleser professor of neurology. He has over 20 years experience conducting studies on the use of near-IR light for PDT of cancer and photobiomodulation of mitochondrial energy metabolism.