Improved understanding of the fundamental cellular and molecular mechanisms is broadening the technique's mainstream use for many ailments.
09 July 2009
Ying-Ying Huang, Michael Hamblin, and Aaron C.-H. Chen

Low-level laser (or light) therapy (LLLT)—also known as cold or soft laser, biostimulation, or photobiomodulation—is an emerging therapeutic approach in which cells or tissue are exposed to low-levels of red and near-IR light from lasers or LEDs. It might either stimulate or (less likely) inhibit cellular function, leading to reduction of cell and tissue death, improved wound healing, increasing repair of damage to soft tissue, nerves, bone, and cartilage, and relief for both acute and chronic pain and inflammation.

Both light absorption and scattering in tissue are wavelength dependent, and the principal tissue chromophores (hemoglobin and melanin) have high absorption bands at wavelengths shorter than 600nm. For these reasons, there is a so-called 'optical window' at red and near-IR wavelengths, where the effective tissue penetration of light is maximal (see Figure 1). Thus, although blue, green, and yellow light may have significant effects on cells growing in optically transparent culture medium, LLLT use in animals and patients almost exclusively involves red and near-IR light (600–1070nm). 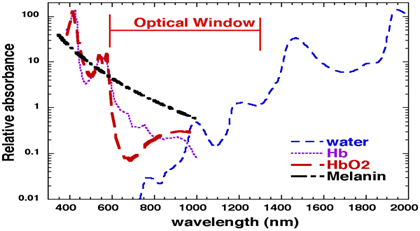 The first law of photobiology states that for low-power visible light to have any effect on a living biological system, the photons must be absorbed by electronic absorption bands belonging to some molecular chromophore or photoacceptor.1 Cytochrome c oxidase, a subunit in the mitochondrial electron-transport chain, may play a role as a primary photoacceptor in mammalian cells since it has absorption bands up to 1000nm.2 Figure 2 shows a schematic representation of the application of LLLT. 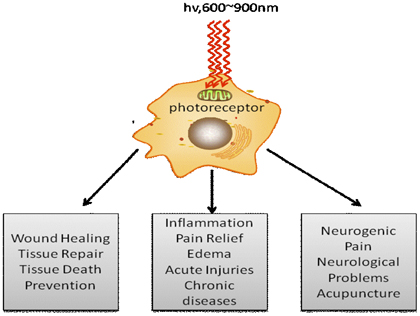 We have demonstrated that laser illumination increases both intracellular reactive-oxygen species (ROS) and adenosine triphosphate (ATP) synthesis3 in mouse embryonic fibroblasts and other cell types in culture. We have also found evidence of nitric oxide (NO) release after exposure to low levels of red and near-IR light. This suggests that ROS might play an important role in the LLLT signaling pathway. It can induce expression of several redox-sensitive transcription factors, such as nuclear-factor kappa B (NF-kB), that can then increase transcription of many gene products.3 The correct wavelengths and power of light delivered to cells for an appropriate period of time will be absorbed by a specific photoacceptor like cytochrome c oxidase. This photodissociates the inhibitory NO, thereby increasing enzyme activity, and boosting mitochondrial respiration and ATP production (see Figure 3). Proteins like hemoglobin and myoglobin may release additional NO, leading to downstream cell signaling. 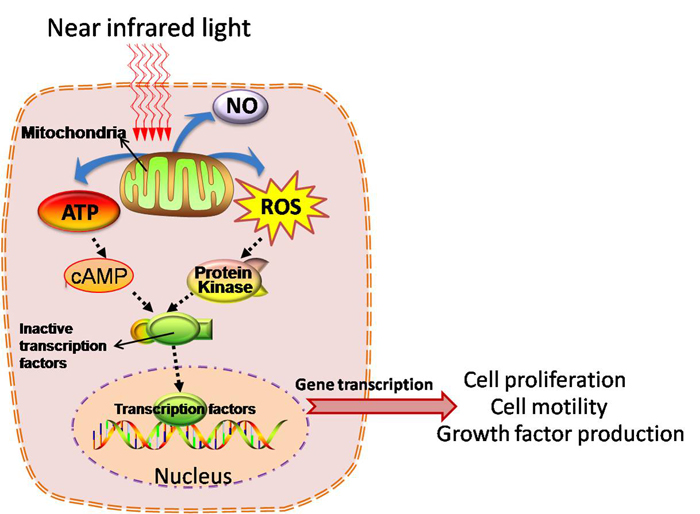 Although the underlying mechanism of LLLT are not yet completely understood, in vitro, animal, and clinical studies indicate that the technique can prevent cell apoptosis4 and improve cell proliferation,4 migration,5 and adhesion6 (see Figure 4). These cellular effects support clinical applications.

Our laboratory has shown7 that a single exposure to red (632nm or 670nm) or near-IR (810nm) wavelengths (either coherent laser or noncoherent LED light) 30 minutes after wounding can stimulate wound healing in mice. Specifically, the light appears to hasten the contraction process at the edges of the excisional wound. It does so by transforming fibroblasts in the dermis into myofibroblasts expressing smooth muscle actin and with a contractile phenotype. One mediator of this fibroblast-myofibroblast transformation is NF-kB. We observed a biphasic-dose response with a maximum effect at 2–4J/cm2. In another study,8 we explored the effect of 810nm laser light to treat arthritis in rats caused by intra-articular injection of zymosan. We used two fluences (3 and 30J/cm2) delivered at high and low irradiance (5 and 50mW/cm2) with 810nm laser light daily for five days, with the positive control of conventional corticosteroid (dexamethasone) therapy. Illumination with 810nm laser was highly effective (almost as good as dexamethasone) at reducing swelling. A longer illumination time (10 or 100min compared to 1min) was more important in determining effectiveness than either total delivered fluence or irradiance. 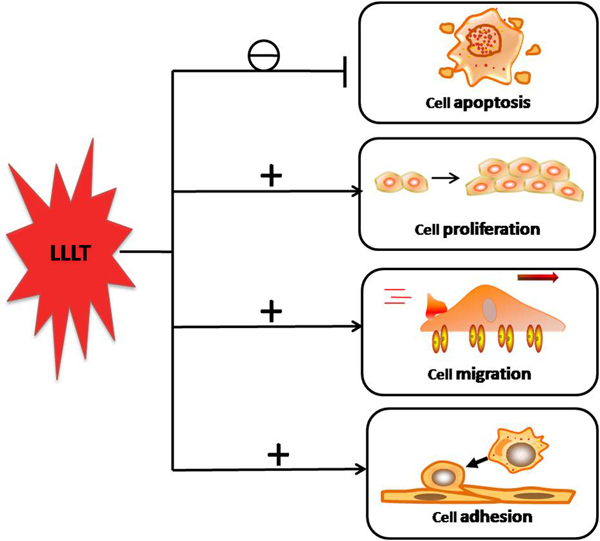 Researchers are making advances in molecular and cellular biology at an increasing rate worldwide. We believe that scientific discoveries and increased rational understanding will broaden LLLT's acceptance in the scientific and medical communities. Our ongoing work is therefore investigating its basic cellular and molecular mechanisms, and untangling the relative contributions of increased mitochondrial respiration, ROS generation, and NO release to overall cell stimulation. We are also studying the effect of transcranial LLLT in mitigating brain damage in a mouse model of traumatic brain injury.

Ying-Ying Huang gained her medical qualifications in Nanning, China, and moved to Michael Hamblin's laboratory in 2008, where she works on LLLT and photodynamic therapy.

Michael Hamblin is a principal investigator and associate professor of dermatology. His research interests are in photodynamic therapy and LLLT.

Aaron Chen is a graduate student in Michael Hamblin's laboratory.