A combination of fusion-range measurements and self-report can identify susceptibility to visual strain.
27 May 2009
Marc Lambooij, Wijnand IJsselsteijn, Marten Fortuin, and Ingrid Heynderickx

Despite significant advances in technology, stereoscopic television (TV) has not yet delivered on its promise of providing an entirely strain-free viewing experience. Sources of visual discomfort may include excessive binocular disparities, conflicts between accommodation and vergence (the simultaneous movement of both eyes in opposite directions), imperfect image separation (crosstalk), and imperfections in 3D rendering. Considerable research into the causes and effects of visual discomfort is needed to understand the underlying perceptual mechanisms, as well as its operability and measurement in the context of display applications.1

Past research on visual discomfort2–4 has demonstrated considerable variability in both objective indicators of visual fatigue and subjective signs of visual discomfort, as well as large individual differences. We suggest two potential causes for this lack of consensus. The first is variation in visual systems. More specifically, approximately 20% of the population suffer from some form of a binocular anomaly.5 The associated visual complaints that are not necessarily present in normal viewing situations may become acute or more severe when viewing stereoscopic content. Second, we hypothesize that clinical tests may not all be equally appropriate for evaluation purposes. We aim to find empirical validation for both suggestions. 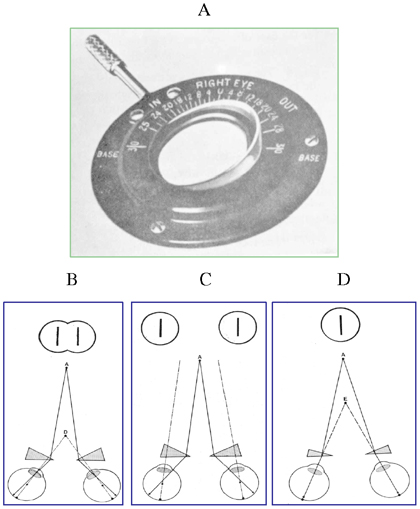 Figure 1. Fusion-ranges measurement, commonly characterized with (a) rotary prisms that (b) increase prism loads at which binocular single vision is (c) lost and (d) recovered again.

Our experimental design was twofold, including optometric screening (one session), and measurement of visual fatigue and discomfort under varying conditions (four sessions). The former allowed differentiation of the participants in terms of their susceptibility to visual fatigue based on the functionality of their visual systems. The four sessions of the actual experiment differed in both dimension (2D versus 3D) and display type (nine-view autostereoscopic LCD versus two-view polarized cathode-ray tube). We used eight different objective optometric indicators and one subjective questionnaire as pre- and post-measurements in the context of a reading-aloud task. Figure 1 visualizes one of our eight objective indicators, a fusion-range measurement. 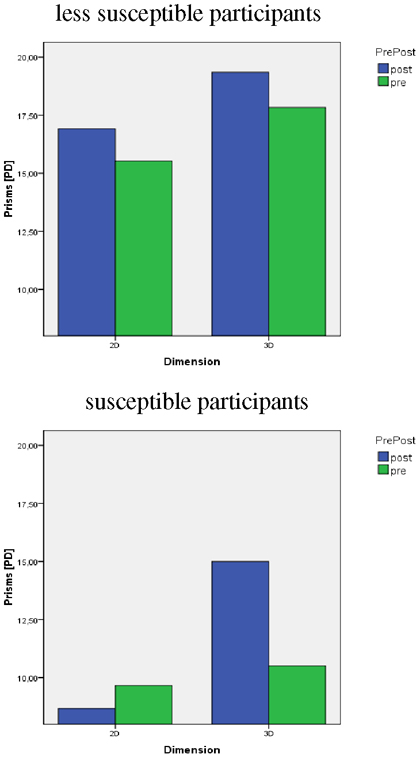 Figure 2. Pre- and post-convergence fusion ranges of susceptible and less susceptible participants to visual fatigue for 2D and 3D geometries, in units of prism diopters (PD).

Most objective indicators did not reveal any change in visual functionality caused by 3D stimuli on the basis of either of the displays. However, when looking specifically at a visually vulnerable subset of our participants (based on a decision algorithm5 aimed at evaluating the degree of decompensated heterophoria), some indicators showed significant and clinically meaningful changes after exposure to the 3D stimuli, accompanied by self-reported visual discomfort. Specifically, participants susceptible to visual fatigue revealed changes in their fusion range after exposure to the 3D stimuli and indicated significantly more visual discomfort than the control group (see Figure 2).

Next, we attempted to determine the most appropriate indicators for measuring visual fatigue associated with 3D TV. Optometric prescreening allowed us to select people who were more susceptible to visual discomfort related to viewing 3D displays. The only objective indicator that revealed a change in the visual system caused by short-term stereoscopic viewing is the fusion-range measurement, as confirmed by subjective indicators. Hence, we suggest that a combination of fusion-range measurement and self-report is appropriate for measuring visual fatigue related to 3D TV. Our future work will concentrate on exploring these results in greater depth, using more detailed differentiation of participants, and applying the range of indicators in long-term viewing experiments.

Marc Lambooij is a PhD student in a collaborative research project with Philips Research, the Netherlands. He holds a BA in medical engineering and an MSc in human-technology interaction. He focuses on visual comfort associated with 3D-display systems.

Wijnand IJsselsteijn is an associate professor. He holds a BSc in artificial intelligence, an MSc in cognitive neuropsychology, and a PhD in media psychology and human-computer interaction. He has been active in the area of stereoscopic displays for over 12 years. His other professional interests include telepresence, digital social media, and gaming research.

Marten Fortuin is a part-time PhD student at both the Department of Optometry and Visual Science of City University, London (UK) and Eindhoven University of Technology. As senior member in the Department of Optometry, Faculty of Applied Sciences, Hogeschool Utrecht (the Netherlands), his main interests focus on refraction, visual ergonomics, binocular vision, and orthoptics.

Ingrid Heynderickx holds a PhD in physics. She joined the Philips Research Laboratories in 1987. She is a principal researcher, heading the project on visual perception of display systems. Since 2005, she has been a guest research professor at the Southeast University of Nanjing (China) and part-time full professor at the University of Technology Delft.