Far from reaching its limits, micro-electromechanical systems (MEMS) technology has proved itself in applications ranging from car acceleration and pressure sensors to space-telescope shutters. MEMS devices, as well as nano-electromechanical system (NEMS) applications, currently approach nanometer scales, thus promising even greater versatility, including hybrid terahertz electronics, low-power memories, and sensors with record sensitivity. While NEMS devices have much potential, their engineering is entering a new territory full of surprises and paradoxes. Among the latter are van der Waals/Casimir (vdW/C) forces, quantum effects in the charge distribution (including but not limited to quantum capacitance, Coulomb blockade, and charge tunneling), and the breakdown of bulk elasticity theory.

At the same time, classical models (such as beam and shell mechanics) continue to work surprisingly well beyond projected atomic-scale limits, as we demonstrated for nanotube (NT) NEMS. Even when a quantum charge distribution1,2 influences the coupling between the NEMS channel and the ground plate, one can introduce an effective (quantum) capacitance,3 although different from the classical concept. Thus, appropriately modified ‘classical’ electrostatic and mechanical models may be sufficient to understand NEMS operation.

The three main geometries employed in NT-NEMS fabrication are suspended multiple- or single-NT bridges (including NT arrays),4 tweezers, and single-arm switches, which can be either horizontal or vertical (see Figure 1). A switch consists of a movable structure (which can be a single- or multi-walled carbon NT) and a fixed ground plate, which can be modeled by, e.g., bulk graphite.5 Applying a potential induces electrostatic charges that give rise to electrostatic forces, the strength of which depends on the gap between structure and plate.1,2 A quantum-mechanical approach is often needed to compute the charge distribution (and force) in NEMS because of the finite electronic density of states.3,6 For NT-array switches, an additional term may appear due to intertube coupling, just as in thin-film transistors.4 The vdW/C forces deflect the NT, as shown in Figure 1. Counteracting the latter are elastic forces, which try to restore the NT to its original straight position. In MEMS modeling, we apply a classical finite-element (FE) scheme to compute this response. At the nanoscale, however, FE modeling should be parametrized using a program such as Molecular Dynamics,7 since bulk elastic parameters may not be accurate for NEMS. 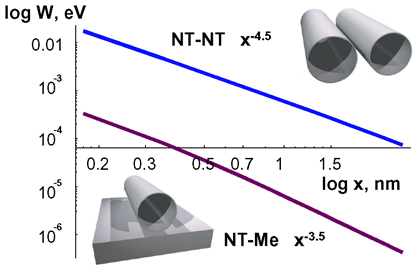 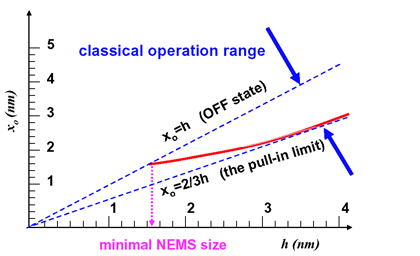 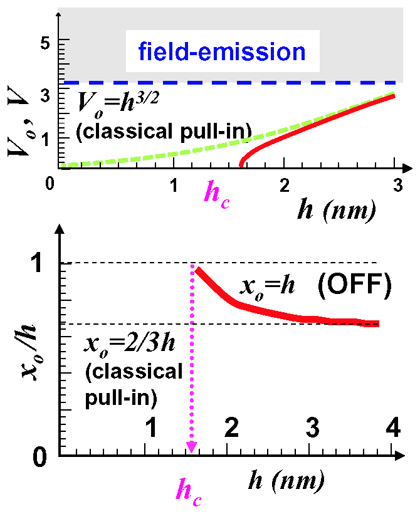 Figure 4. Fundamental physical limitation for NEMS fabrication due to the vdW/C force. (bottom) Unitless pull-in gap (as a fraction of NEMS size), x0/h, as a function of NEMS size. (top) Pull-in voltage, V0, versus NEMS size. The dashed (green) line shows the classical result, V0 ~ h2/3. The shaded area is not accessible due to possible field emission from the NT. The critical device size, hc, is reached when V0=0 and x0=h.

For a given applied voltage, the equilibrium position of the tube is defined by the balance of the elastic, electrostatic, and vdW/C forces. As the NT deflects, all forces are subject to change, and a self-consistent analysis is required to compute the NT's equilibrium position from the zero-force condition5 or, alternatively, as the minimum of the total energy.6 When the applied potential exceeds a certain critical value (the ‘pull-in voltage’), the NT collapses onto the ground plate and, if it is conductive, the device is in the ‘on’ state.

If the elastic force is strong enough to overcome the vdW/C force at zero separation, the NEMS moves to the original ‘off’ state when the potential is released. Sticking in the ‘on’ position can limit the operability range. If the gap between cantilever tube and ground plate is too small, even without an applied voltage, the NT can collapse onto the ground plate because of vdW/C forces. A standard simulation5 used a Lennard-Jones 6–12 potential (an empirical pairwise interatomic potential), which is known to neglect the nonadditivity of vdW/C interactions. However, we have calculated many-body corrections from nonadditive surface-plasmon/polariton modes between an NT and a metal substrate,8,9 showing a significant difference in the distance dependence of the vdW/C energy, W ∝ x−3.5 (where x is the distance), compared to that of the classical 6–12 potential, W ∝ x−4 (see Figure 2).

Using vdW/C forces and electrostatics from quantum-mechanical computations, we analyzed NEMS scaling.6,9 In addition to obtaining a correction for classical expressions for the pull-in voltage (see Figure 3) and the corresponding gap in the single-NT switch, we found that the vdW/C force sets a fundamental physical limitation for scaling down the size of NEMS (see Figure 4).

The physics of carbon-NT devices is rather distinct from that of standard MEMS. Atomistic approaches such as molecular mechanics and dynamics must replace continuum elastic theories. The quantum-mechanical Schroedinger equation must be solved, as well as the Poisson equation, to obtain self-consistent electrostatics. However, atomistic computation can be very computer-time consuming.

A good compromise is to develop a multiscale method in which continuum theories are combined with atomistic approaches. The main difficulty is the requirement to solve the problem self-consistently for device structures. The electronic structure and mechanical response may change during device operation, which requires iterative computation. Recently developed multiscale-modeling methods allow us to speed up simulations substantially, to understand existing NEMS, and to uncover novel nanoscale-device principles. To develop NEMS devices that work reliably at high speed, we need to control vdW/C forces, which can be done (in principle) by engineering the electromagnetic response of the ground plate. We plan to extend our multiscale modeling to nanopatterned surfaces with nonclassical vdW/C responses.

Slava Rotkin is the Feigl Junior Faculty Scholar and assistant professor of physics. He received his MSc in optoelectronics (1994) from the St. Petersburg Electrotechnical University and his PhD in physics and mathematics (1997) from the Ioffe Institute in St. Petersburg, Russia. He is a recipient of multiple scientific awards, including the Libsch Early Career Research Award, and Feigl Beckman, and Royal Swedish Academy of Science fellowships.