Thermophotovoltaic (TPV) systems are direct-conversion heat engines that use photovoltaic cells to generate electricity from the radiant energy emitted by a heated object.1,2 In typical TPV systems, the object is heated to temperatures of 1300–2000K. Concentrated sunlight or various other sources can provide this heat, enabling silent, portable, and durable electricity generation. The surrounding photovoltaic cells collect the radiation from the emitter. Photons not absorbed by the cells are reflected back to the emitter by a mirror, thus conserving emitter energy (see Figure 1). 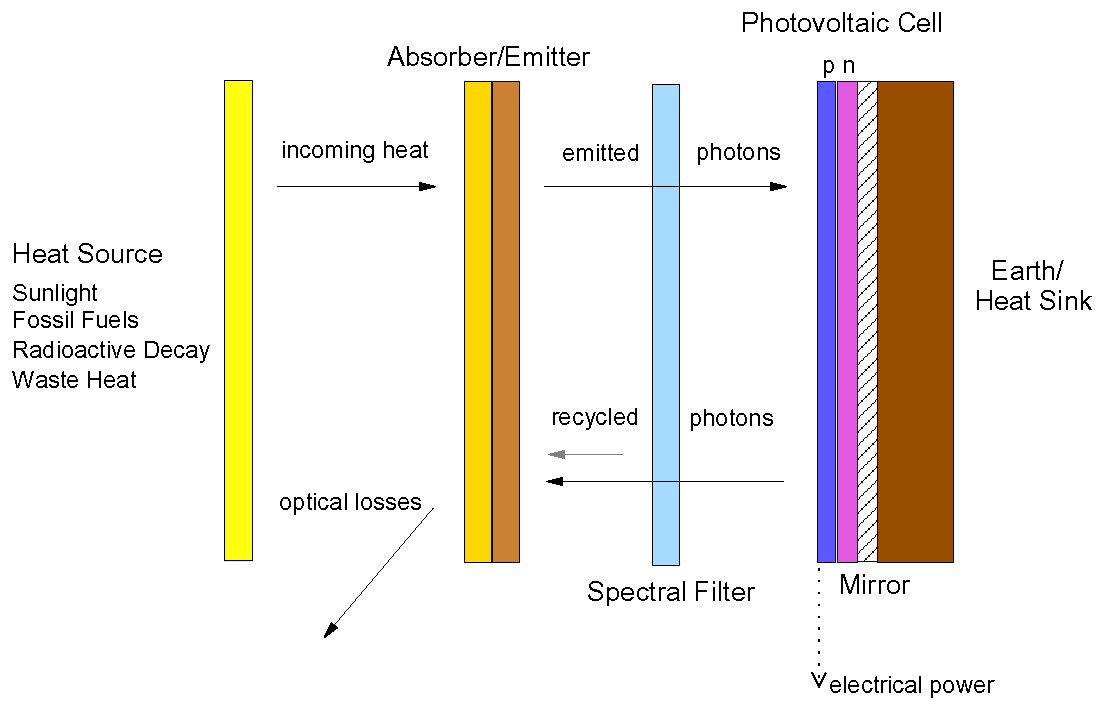 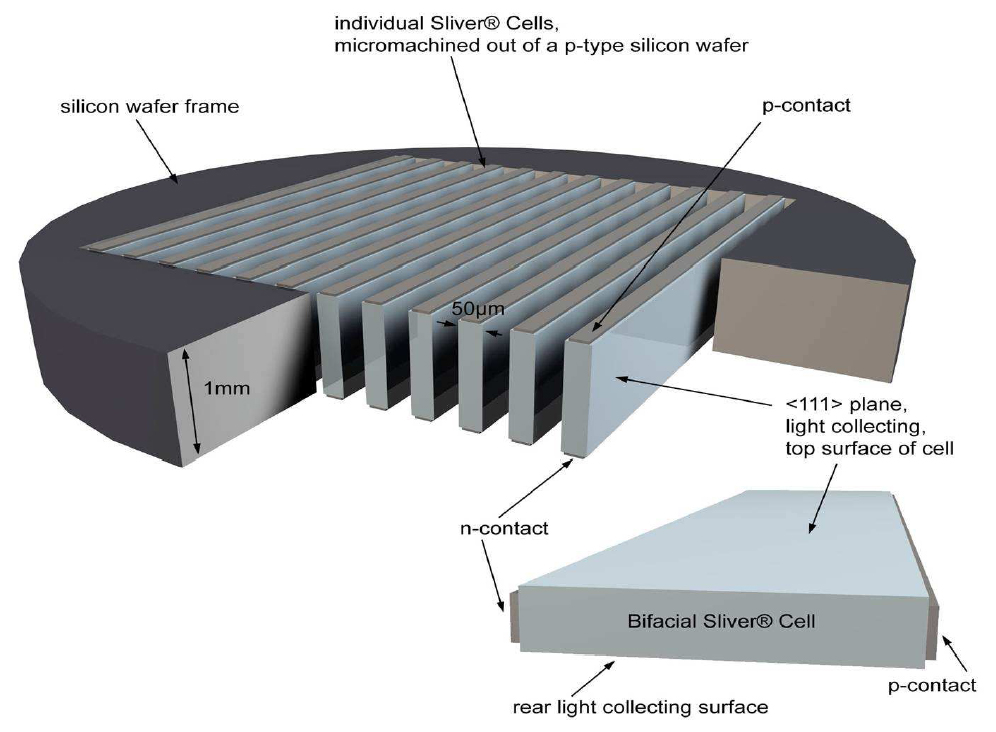 Sliver cells are processed within the wafer and subsequently extracted to form many individual cells (see Figure 2).7 The cells are flexible, bifacial, and thin, generally between 20 and 100μm. When used in TPV systems, the geometry of sliver cells allows for high rates of absorption and photon recycling, direct heat sinking, and low circuit-resistive losses through submodule interconnection. Sliver cells have contacts on their edges, which appear to be of considerable importance for operation at high illumination densities, including in TPV systems.7 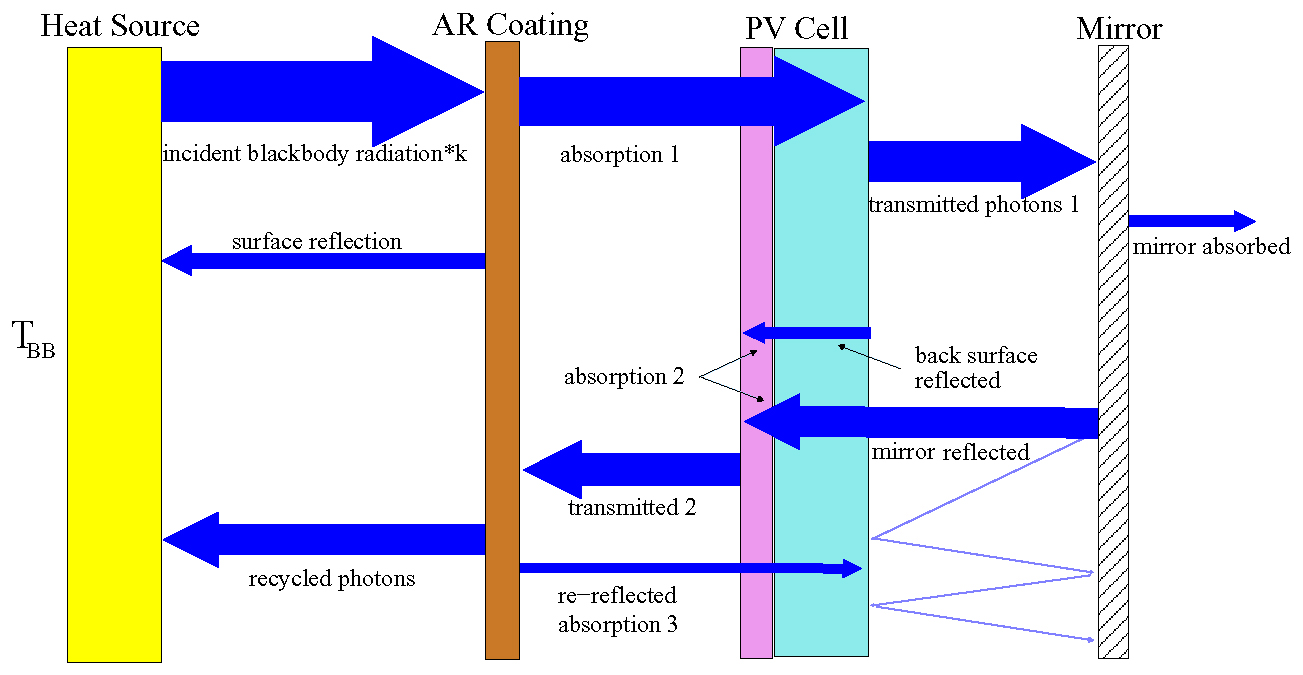 We developed a 1D computational model to compare sliver with conventional cells in TPV systems (see Figure 3). External variables were set at excellent but achievable levels. Transport-resistance losses are significant for both conventional and sliver-cell TPV systems. The resistance of conventional cells depends linearly on cell height.9 In contrast, the resistive power loss for sliver cells depends inversely on the cell height and is proportional to the square of the cell width. The difference between the transport-resistance losses for the two cell types proved to be significant.

A state-of-the-art back-contact cell was analyzed in an idealized TPV system. We took the efficiency of the TPV system to be the ratio of electrical power output to the power required to keep the blackbody at a constant temperature. At a practical TPV temperature of 2000K, the modelled efficiency for the conventional silicon cells is ∼27% (see Figure 4). It is also important to consider the output power density of the TPV system. Figure 5 shows that the primary advantage for thin conventional cells is due to their decreased resistance and not to lower levels of free-carrier absorption. This was contrary to our initial expectations.

We performed a similar analysis for sliver cells. We found a broad efficiency maximum for high blackbody temperatures and largecell thicknesses (see Figure 6). Sliver-cell relative maximum efficiencies were ∼85% of those achieved by conventional cells, but comparable at practical emitter temperatures. Figure 7 shows that electrical output densities for the optimum cell design are a factor of five lower than for conventional cells. This is caused by transport-resistance losses, which depend on the square of cell width, kept here at 300μm. Halving sliver width, however, would result in a fourfold reduction in lateral resistive losses.

Figure 6. Sliver-cell efficiency surface (a) and contour map (b).

Figure 7. The relatively broad efficiency maximum is due to sliver-cell performance being limited by cell width, which is kept at 300μm.

Within the range of parameters examined, we found that sliver cells do not offer an efficiency advantage over well-designed conventional cells in TPV systems. However, the practical considerations of heat-sinking, submodule resistances, and metal contact area at high incident power densities are likely to favor sliver-cell geometries. Sliver-cell output power densities at high TPV-illumination intensities were strongly limited by lateral transport resistance, although reducing sliver-cell width would dramatically decrease transport-resistance losses. Our ongoing research focuses on the feasibility of using thin, narrow sliver cells in TPV systems.

Niraj Lal thanks the community at the Australian National University (ANU) Centre for Sustainable Energy Systems, in particular Evan Franklin, who provided valuable assistance with programming. He also acknowledges the support of the ANU Angus Nicholson Scholarship.

Niraj Lal graduated from the Australian National University in 2007 as the Angus Nicholson Honours Scholar, which is awarded for passion and academic excellence in science. He is currently studying for a PhD in third-generation photovoltaics as a Gates Scholar at the Nanophotonics Centre of the University of Cambridge (UK).

Andrew Blakers is a professor and the director of the Centre for Sustainable Energy Systems.