Over the past several years, new technologies have created a revolution in astronomical data-access methods used by professional and amateur astronomers. The Virtual Observatory1 (VO) has introduced standards for data exchange that greatly simplify the research process. Simultaneously, the release of free, educational, and entertaining software (e.g., Google Sky and Microsoft's WorldWide Telescope) has made astronomical exploration intuitive and engaging. We have combined these technologies to allow astronomers of all aptitudes to access and explore astronomical data quickly and easily.

A new keyhole-markup-language2 (KML)-based World-Wide Web service, ‘KML Now!,’ brings VO image data to the Google Sky desktop client through an easy-to-use web interface that allows users to search for image data.3 The server returns a KML document that can be opened in Google Sky and then proceeds to acquire all relevant images, convert them appropriately, and make the image data available on the web. The KML document informs Google Sky from where to retrieve the converted server-side images and where to place them in the digital sky. Figure 1 shows an example of an IR image of the center of our Milky Way galaxy imported into Google Sky using KML Now! 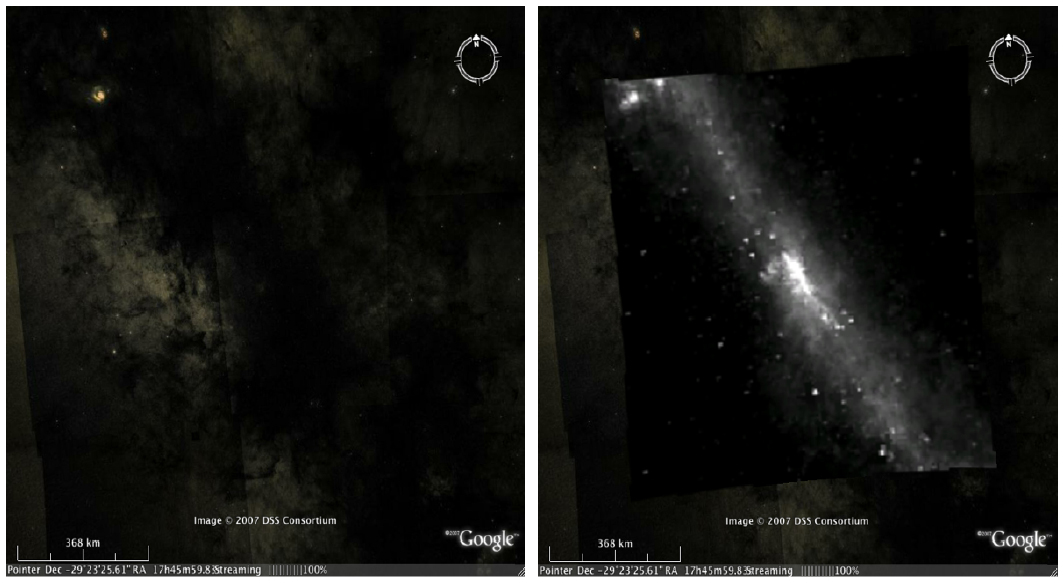 Despite being freely available on the Internet, scientific astronomical image data is difficult to access by nonprofessionals. Astronomical science images are frequently stored in flexible image-transport system (FITS) format.4 FITS is used almost exclusively by astronomers and has been designed for storing a wide range of data types. Support for FITS is limited outside research-oriented software packages. Converting FITS images to a Google Sky-friendly format, therefore, often requires advanced understanding of astronomical software. KML Now! is specifically designed to make astronomical images available to all Google Sky users.

There are four inputs to KML Now!, i.e., the astronomical search coordinates (right ascension, declination, and radius) and the image service to be queried. Over 150 image services are currently available, serving image data observed at wavelengths from radio waves to gamma rays and including most major telescope facilities. KML Now! provides a list of all available services and allows the user to select the services to query. On the server side, it is supported by a Django web framework running on an Apache hypertext transfer-protocol server. A Python script calls third-party open-source tools.

When a query is received, a ‘launcher’ KML document is returned, pointing to query-specific server-side KML files that are subsequently created. VO command-line interface is invoked to query the image services and return a list of available FITS files.5 The images are downloaded and converted to portable-network-graphics (PNG) format using the open-source programs STIFF6 and ImageMagick.7 The open-source program wcs2kml8 then converts the world-coordinate system in the FITS header to Google Sky coordinates and ‘warps’ the PNG image for proper spherical projection in Google Sky. The coordinate information for each image is written to server-side KML documents that are cached along with the warped PNG images (see Figure 2).

In summary, recent advancements in scientific and educational astronomy software have unlocked new opportunities for sharing the contents of scientific data archives with a wide audience. KML Now! brings together VO data services and the Google Sky desktop client to place online astronomical image archives within reach of every Internet user. Future development will fully incorporate it into Google Sky, allowing users to search and obtain VO data without the need for a web browser.

Funding for KML Now! is provided by the National Radio Astronomy Observatory (NRAO) and the National Virtual Observatory. The NRAO is a facility of the National Science Foundation operated under cooperative agreement by Associated Universities Inc.

Jared Crossley is a scientific associate who works on VO software development and integration as well as automated synthesis imaging of archival data.

Ron DuPlain is a software and systems engineer working with on-demand telescope-data browsing and access, lightweight field-programmable gate-array instrument control, and the use of Google Sky as a tool to better understand telescope-data archives.

Nicole Radziwill is assistant director for end-to-end operations, overseeing software development and service delivery. She is an American Society for Quality (ASQ) certified manager of quality and organizational excellence, and the chair-elect of the 4000+ member ASQ software division.