Novel nanomaterial composites comprised of carbon nanotubes (CNTs) and nanocrystals (NCs) may revolutionize functional materials for applications in optical and energy-storage devices.1–5 One major trajectory in the design of these materials is the formation of multilayered composite structures. These architectures, with alternating layers of CNTs and NCs separated by sharp interfaces, are highly relevant to energy-storage devices, such as supercapacitors and fuel cells, in which a charge must be reliably separated and transported. Our ability to deposit homogeneous layers of the CNTs and NCs sequentially, using an industrially-applicable process, is central to the development of these composite architectures.

A number of film fabrication techniques, such as drop casting, spin casting, layer-by-layer, Langmuir-Blodgett, and electrophoretic deposition (EPD), can be used to fabricate composite structures of CNTs and NCs. Of these techniques, EPD is the most promising in the current context, due to its enhanced site selectivity, thickness control, and high deposition rate compared to other deposition schemes.6 EPD involves the motion of charged, polar or dipolar particles that are under the influence of an applied electric field, and their subsequent deposition on electrodes of complementary polarity (see Figure 1).

To produce alternating layer heterostructures of CNTs and NCs, we carry out EPD under two different electric field–current regimes: low field-high current and high field-low current.7 The different electrical conductivities of the CNT and NC media demand that we use two operating regimes. We treat the CNTs so that they form a well-dispersed, stable suspension in polar media (e.g., water),1 while typical NCs disperse in non-polar media (e.g., hexane). Large currents flow through the CNT suspensions even at low electric fields due to the large electrolytic current contribution of the water. In contrast, small electrolytic currents flow through NC suspensions even at high electric fields. As a result, the low field-high current regime is preferred for the CNT films, and the high field-low current regime is preferred for the NC films. We combine these two electric field-current regimes, in sequence, to form alternating layer homogeneous heterostructures of the CNTs and NCs. 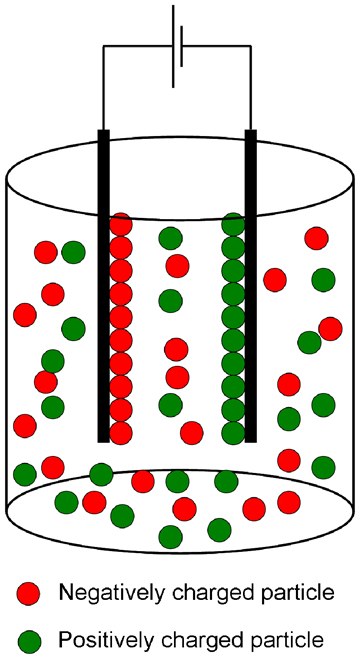 We employed multi-walled CNTs and iron oxide (Fe3O4) NCs with average diameters of 50nm and 20nm, respectively (see Figure 2) to fabricate the heterostructures. Well-dispersed, stable suspensions of the CNTs and NCs are integral to the EPD fabrication of high-quality heterostructures; these are prepared in water and hexane, respectively. In one example, the CNT mat-NC film-CNT mat heterostructures were deposited on steel substrates. First, the CNT mat was deposited onto a steel substrate using the low field-high current regime. CNT mats were deposited only on anodes due to the presence of negatively-charged acidic groups on the surface of the CNTs. Next, the CNT mats were employed as an electrode to deposit the Fe3O4 NC film using the high field–low current regime. We observed that multiple depositions of the NCs onto the CNT mat improved the surface coverage and uniformity of the film. Later, the NC deposited-CNT mat was employed as an anode to deposit a second CNT layer. Figure 3a shows the structure of the second CNT mat, which is identical to that of the first CNT mat. The CNTs predominantly lie in-plane with the substrate and are randomly oriented, producing a porous connected network that can be used as an electrode in subsequent device operation. The surface roughness of the mat, measured by atomic force microscopy (AFM), is 34.6nm. Figure 3b shows a cross-sectional image of the heterostructures. The thicknesses of the three layers are approximately 6μm, 150nm, and 1μm, for the first CNT, NC, and second CNT films, respectively. The high magnification cross-sectional scanning electron microscopy image (Figure 3c) shows the sharp interfaces between the three layers.

Figure 3. a) SEM image of a CNT mat deposited on a stainless steel electrode. b) Cross-sectional SEM of the CNT mat–NC heterostructure. c) Magnification of the cross-section.

We have successfully integrated low field-high current and high field-low current EPD techniques in an alternating sequence to fabricate CNT-iron oxide NC heterostructures. EPD produced homogeneous films with sharp interfaces between the layers. The ability to fabricate such composite architectures of nanomaterials facilitates a wide range of optical, magnetic, and energy-storage device applications. The approach can be readily extended to combine a range of functional nanocrystals with carbon nanotube electrodes.