Light can exert a mechanical action on matter. Although this simple concept has been known for centuries (Kepler's explanation of comet tails is based on it), the advent of the laser age has led to tremendous experimental advances and understanding of this phenomenon. Optical tweezers, instruments based on a tightly focused laser beam, have been used to trap, manipulate, control, and assemble dielectric particles, single atoms, cells, metal, and semiconducting nanostructures, leading to a real optical revolution in physics, biology, and nanotechnology.1

When used as force transducer, optical tweezers can measure forces in the piconewton range. In this context, the concept of photonic force microscopy (PFM) has been developed by scanning a dielectric sphere over surfaces in a liquid environment and sensing the force interaction.2 While the lateral resolution in PFM applications is related to particle size, the extension of conventional optical trapping to nanoparticles is a difficult task, since the radiation force scales with the volume of the trapped particle. Recently, optical trapping of carbon nanotube bundles was realized in aqueous environments.3 The almost linear geometry of these nanostructures, which have a subwavelength cross section and very high aspect ratio, is of crucial importance for bridging the gap between the micro and nano-world. In our work4 we demonstrated that the nanotubes' small transverse size is key to achieving nanometric resolution for PFM applications, while an axial dimension in the micron range ensures stable trapping and allows force sensing in the femtonewton regime. 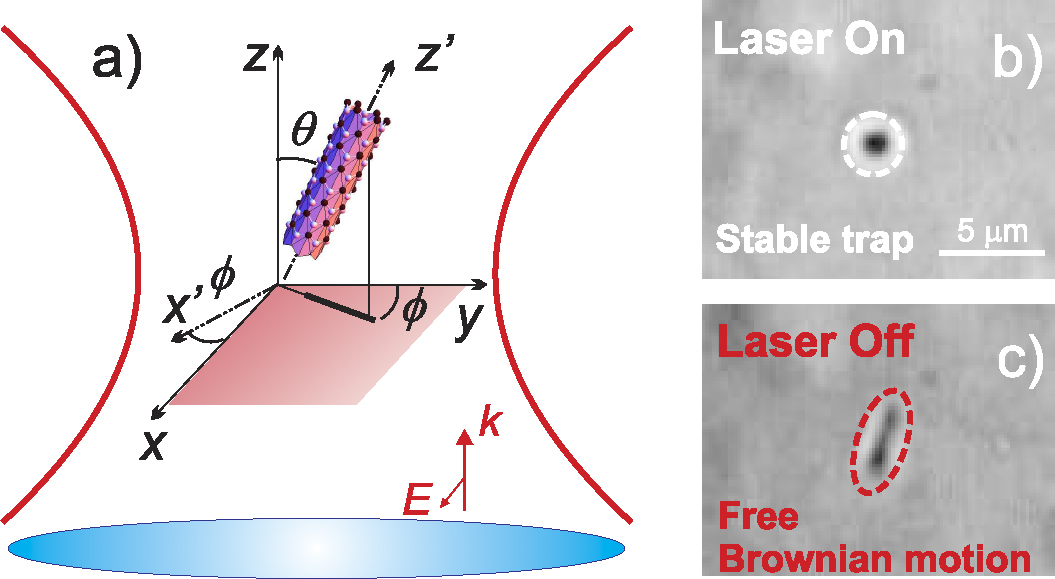 Figure 1. (a) Optical trapping geometry. A laser beam is expanded to over-fill the back aperture of a high numerical microscope objective. The laser light propagates along the z axis (oriented as k wavevector) while x is the polarization axis (oriented as E=electric field). The light is focused in a chamber containing the nanotube solution; here the cylinder represents a randomly oriented nanotube. (b) A laser trapped bundle oriented by radiation torque along the optical axis. (c) The same bundle un-trapped (laser is off) and randomly oriented by Brownian motion.

A critical element in force sensing with optical tweezers is Brownian motion—random fluctuations of particles in a fluid. Performing statistical analysis of an optically trapped particle's fluctuations about equilibrium enables force measurements. The ultimate space and force resolution when using nanotubes is linked to their Brownian dynamics in the optical trap. Specifically, the effects of the external hydrodynamic environment, which lead to fluctuations in both position and orientation, define the ultimate resolution. We extracted the distribution of both center-of-mass and angular fluctuations from 3D tracking of optically trapped nanotubes. For the first time, we measured the optical force and torque constants from auto- and cross-correlation of the tracking signals. This allowed us to isolate the angular Brownian motion and to calibrate fully the optical tweezers when using nanotubes as force sensing probes.

In our work, purified single wall nanotubes (SWNT) are dispersed in water with sodium dodecyl benzene sulphonate (the solutions are ultrasonicated and filtered). A few tens of microliters are placed in a small chamber attached to a piezo-stage. We perform optical trapping by tightly focusing an infrared (830nm) laser beam through a high numerical aperture objective (see Figure 1a). Using back focal plane interferometry, we detect the positional and angular displacements from equilibrium of the trapped particle. The interference pattern between forward scattered and un-scattered light in the microscope condenser back focal plane is then imaged onto a four quadrant photodiode.2 Our technique combines detector signals so that for spherical objects they are proportional to the center-of-mass displacements (for non-spherical particles they also contain angular information). We image the particles through the same objective onto a CCD camera, with diffraction limited resolution. Figures 1(b,c) show a SWNT bundle. In Figure 1b, the optically trapped bundle is aligned with the laser propagation direction (the imaging axis), while Figure 1c shows the untrapped bundle freely floating and randomly oriented. The CCD camera acquisition is slow and can only detect low frequency Brownian fluctuations for untrapped particles. Thus, to measure both translational and angular fluctuations for trapped nanotubes, we rely upon interferometry and quadrant photodiode detection, enabling a much higher sampling rate.

We record the tracking signals and analyze the correlation function of the fluctuations. Spherical particles exhibit a single exponential decay at a relaxation frequency related to the trapping force and particle mobility. On the other hand, the autocorrelations of the nanotube transverse signals contain combined information on center-of-mass and angular fluctuations. These decay with time as double-exponentials, with separated positional and angular relaxation frequencies. Furthermore, the cross-correlations of the transverse signals decay as single exponentials with relaxation rates related to optical torque and the nanotubes' rotational mobility. These combined force and torque measurements enable the full calibration of the optical tweezers when using nanotubes as force sensing probes in the femtonewton regime. Figure 2a shows the Brownian motion of a trapped nanotube bundle with a size of 10nm and a length of 3μm, as reconstructed through the tracking of the fluctuating signals. Histograms of the transverse fluctuations (see, for example, Figure 2b) confirm that the spatial resolution is within 10nm.

Figure 2. Brownian motion in the optical trap. (a) Tracking (black dots) of a trapped SWNT bundle. The projections of the motion in the xy (red dots), xz (blue dots) and yz (green dots) planes are also shown. An increase in mobility (compared to spherical particles) along the z axis is evident. (b) Histogram of a transverse signal. The root mean square of the transverse displacements, extracted from a Gaussian fit, is 9nm. S: Tracking signal.

In summary, we studied the dynamics and hydrodynamics of nanotube bundles in solution. We measured the bundles' angular fluctuations in optical traps and showed that femtonewton force sensing and nanometric resolution can be achieved by tracking their Brownian motion. The nanometric transverse size and micrometric length of nanotubes are the key features that enable stable optical trapping (even at very low laser power) while maintaining small lateral resolution. Future efforts include the optical sorting and manipulation of individual nanotube bundles in enriched dispersions, and the combination of optical tweezers with ultra-sensitive Raman5 and photoluminescence spectroscopy to demonstrate all-optical chirality selection of nanotubes.

Onofrio Maragò studied physics at the Universities of Pisa (MSc) and Oxford (DPhil). Since 2001 he has worked as a researcher at the Institute for Chemical and Physical Processes of the National Research Council of Italy (IPCF-CNR) and as co-founder of the Nano Soft Laboratory. His main research interests are optical trapping, colloidal nanostructures, and soft-matter. He has also worked on cold atoms, Bose-Einstein condensates, and superfluidity.

Andrea C. Ferrari earned a PhD in electrical engineering from Cambridge University, after a Laurea in nuclear engineering from Politecnico di Milano. He is the head of the nanomaterials and spectroscopy group of the Cambridge Centre for Advanced Photonics and Electronics and the Nanoscience Centre. His research interests include nanomaterial growth, modeling, characterization, and devices. In particular, he focuses on graphene, nanotubes, diamond-like carbon, and nanowires for applications in electronics and photonics.