The incidence of cancer is rising in developing countries. It is estimated that, by 2010, 60% of new cases worldwide will occur in the developing world. Detection of cancer at its earliest stages has tremendous impact on long-term patient survival and quality of life. However, in low- and middle-income countries over 80% of cancer patients are incurable at the time of diagnosis.1 Advanced imaging tools such as positron-emission and computerized tomography and medical-resonance imaging require extensive infrastructure and technical expertise and, as a result, are generally only available at regional centers in industrialized countries.

In developing-world settings, most diagnoses are based purely on clinical signs and symptoms. Providing access to objective screening tools at the point of care can have a significant impact on cancer-related mortality and morbidity by enabling early detection, when treatment is cheaper and more effective, and by reducing the burden on overworked pathology laboratories. Optical imaging technologies are well suited to fill this need by measuring changes in scattered or fluorescent signals from tissue caused by the onset and progression of abnormal cell proliferation (neoplasia).

Over the past ten years, our group has developed both wide-field (macroscopic) and high-resolution (microscopic) optical imaging devices for cancer screening and diagnosis. We recently developed low-cost portable battery-powered versions of these systems to enable cancer screening and early diagnosis in developing countries. This transition was initially made possible by theoretical and experimental studies aimed at understanding the underlying biological processes involved in disease progression. The second key factor has been the increase in performance of optoelectronic light sources and detectors, coupled with declining costs driven by the consumer market. 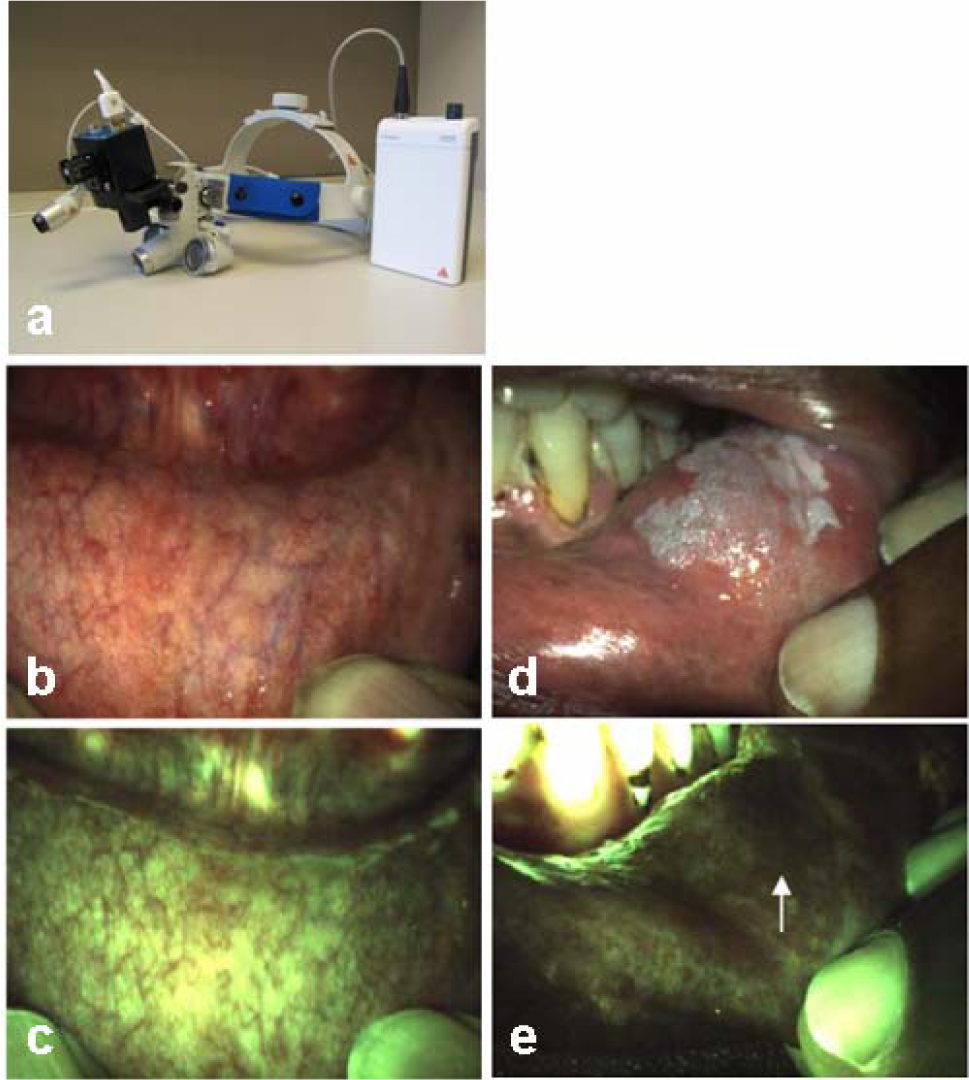 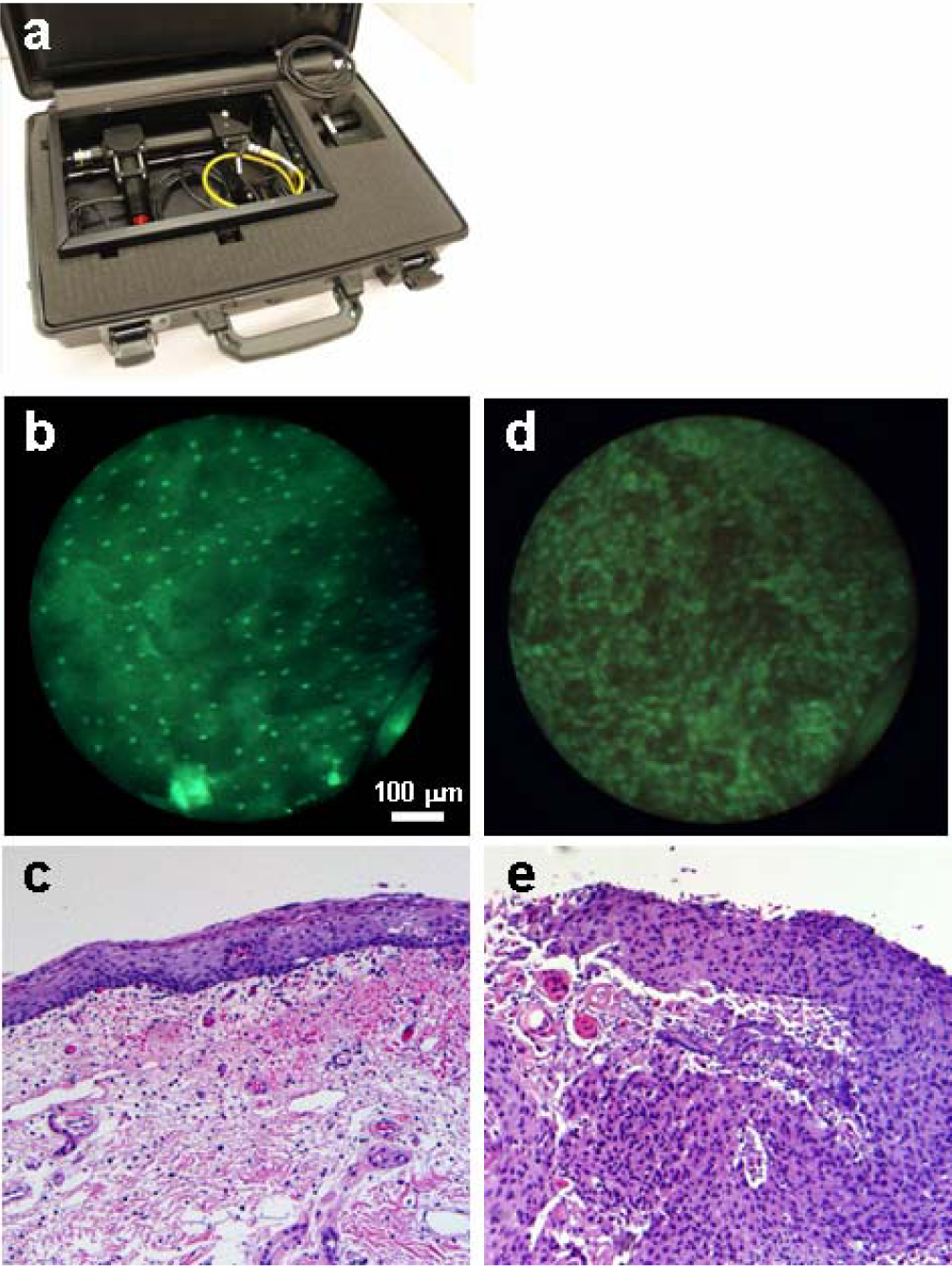 Current procedures for cancer screening typically involve visual inspection of the entire tissue surface at risk under white-light illumination, possibly with additional low-power magnification. Unfortunately, the macroscopic appearance of precancerous lesions under white light can be difficult to distinguish from many benign conditions. This can be improved by using polarization, narrowband-reflectance, or fluorescence imaging modes to reduce specular glare, enhance vascular contrast, or detect alterations in tissue autofluorescence due to disease. We incorporated these features in a portable and robust wide-field imaging device enabling healthcare providers to inspect the oral cavity for cancer and its precursor lesions—see Figure 1(a).2 It uses a modified surgical-headlight system with binocular optics for low-power (2.5×) magnification, white and blue LED illumination for conventional viewing and fluorescence excitation, respectively, and a compact CCD camera for image capture. The system weighs 3lbs. (~1.4kg) and is powered by a laptop computer and rechargeable lithium-ion battery, enabling use in the absence of stable electrical power. We are evaluating the performance of this screening system in a clinical study at Tata Memorial Hospital in Mumbai, India. Figure 1 shows some of the resulting images, with normal (b, c) and precancerous (d, e) sites imaged in white-light (b, d) and fluorescence (c, e) modes. Green fluorescence is clearly seen across the healthy tissue while the characteristic loss of tissue fluorescence is observed at the precancerous site (see arrow).

We have also developed a portable system to enable high-resolution in situ evaluation of cellular features within epithelial tissues: see Figure 2(a).3 This system is essentially a wide-field 10× epifluorescence microscope coupled with a flexible fiber-optic imaging bundle 1mm in diameter, capable of imaging the nuclear size and nuclear-to-cytoplasmic ratio by application of a fluorescent labeling solution. This unit operates entirely off a single 12V rechargeable battery. In Figures 2(b) and (d) acriflavine solution was used to specifically label cell nuclei (appearing as bright dots), illustrating the characteristic differences in nuclear-to-cytoplasmic ratio and nuclear distribution between normal (b) and cancerous (d) oral mucosa.

With advances in our recognition and understanding of cancer biomarkers, the development of molecular-targeted optical-contrast agents is raising the prospect of cancer detection based on biochemical alterations in cellular behavior. Several types of optical molecular-contrast agent are under investigation, generally incorporating a biomarker-targeting element with an optical reporting element (such as fluorescent dye or scattering nanoparticles). The development of optical molecular-contrast agents is still at a relatively early stage, but as compounds establish their efficacy and safety in preclinical and clinical trials, the potential advantages can be translated immediately to developing-world settings. While the systems described here were developed specifically for imaging sites within the oral cavity, these wide-field and high-resolution techniques can be readily applied to other organ sites to address pressing needs for screening and diagnosis of esophageal and cervical cancers.4

Rebecca Richards-Kortum is the Stanley C. Moore professor of bioengineering. She is also the founder of Beyond Traditional Borders and director of Rice 360°: Technology Solutions for World Health. Her research focuses on integrating advances in nanotechnology and molecular imaging with microfabrication technologies aimed at developing optical-imaging systems to improve the early detection of cancers and other diseases, especially in impoverished settings.