Single photons from a satellite: quantum communication in space

Quantum communication (QC) is the art of transferring quantum states from one place to another using entanglement and other nonlocal characteristics of quantum physics. Its appeal is that it is inherently secure because it exploits the fact that observing a photon generally changes its state: if the stream of photons carrying the message is intercepted en route, then the receiver will be able to tell because the communication will turn into random noise. In addition, pulses of light (bunches of photons) are replaced by single photons per bit. However, by definition, each photon carrying information has to be clearly distinguished from the background, and its quantum state maintained as it propagates toward the detector, for QC to work.1

This was straightforward in the research laboratories where the field was born, and where effective protection against ‘decoherence’ and background photons was relatively easy to set up. Significant progress has also been achieved in implementing QC in optical fibers: viable technologies have already been experimentally shown for distributing cryptographic keys over legs of several tens of kilometers. However, the current record for maintaining quantum entanglement in a free-space quantum channel — and so the observation properties required for secure communicationl — is just 144km,2 performed between high-mountain terminals on two of the Canary islands. Our goal is to further extend free-space QC to communication between space and Earth, which means potentially over tens of thousands of kilometers.

Extending this technology to space and, in particular, having a QC source on a satellite, could enable quantum key distributionl — the only provably secure method for exchange of cryptographic keysl — on a global scale. But it will not be easy. In free-space QC (terrestrial or not), a beam with a train of photons must reach a receiver without any optical medium to guide it. In space, additional problems include intense backlight; diffusion and absorption; and atmospheric turbulence and the resulting distortion of the light's wavefront. 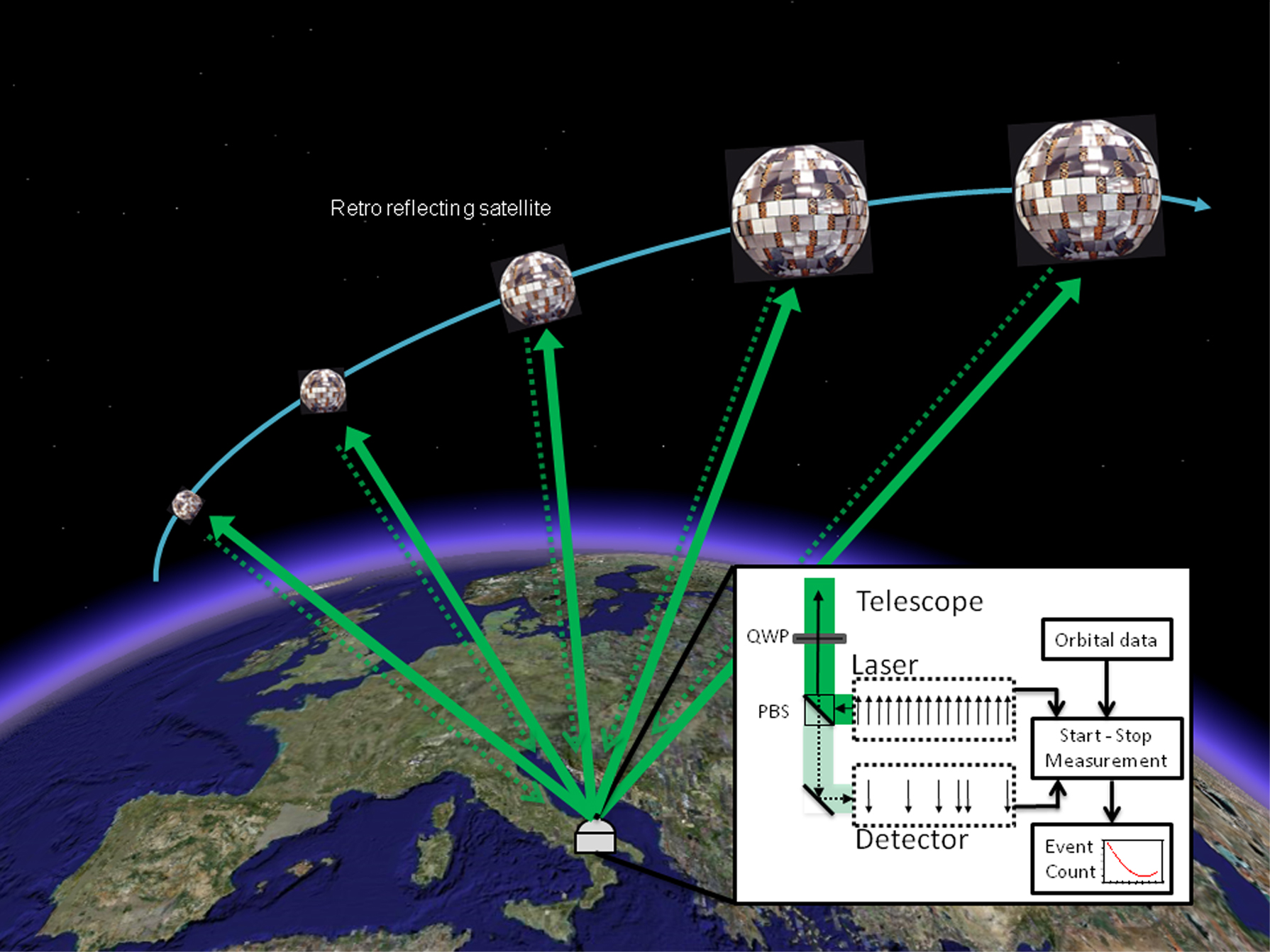 Here we report an experiment aimed at confirming the feasibility of establishing a link between an orbiting source of single photons and a ground telescope.3 In the experiment we simulated a quantum communication single-photon source on a satellite, and showed how the very dim signals could be detected. The quantum sourcel — which must fulfill the requirement that only one photon per pulse is emittedl — was achieved by sending a rapid sequence of weak laser pulses (outward pulses in Figure 1) toward a Japanese satellite (Ajisai) covered with retroflectors at about 1600km of slant distance. Here, there is a very small probability of the photons hitting the satellite and being reflected back to ground, just as there would be if we had a suitable quantum source on the satellite.

The main challenge was to detect the very few reflected photons despite a huge background signal, as would be necessary in a real QC system. The detector we used was an avalanche photon detector connected to a timing circuit. The orbital data of the satellite was used to distinguish the returned photons from the background. We achieved the single-photon link with Ajisai with an average return rate of 5 detector clicks per second. The experimental results agreed with our models, suggesting that the channel from the satellite to the ground terminal was, as we had hoped, well in the single-photon regime.

Realizing this link was just the first step on a path toward space-ground or space-space QC. However, it did demonstrate that existing technology is mature enough and that the crucial progression from theoretical prediction to experimental demonstration is possible. Moreover, the experiment required that a range of expertise from classical optics, to satellite laser ranging for geodesy, to quantum optics, to advanced electronics be effectively combined.

Our final objective will be to realize a quantum terminal acting as both transmitter and receiver, and to install it onboard a satellite.4 This will enable us to perform fundamental experiments addressing questions such as whether there is a spatial limit to entanglement. We expect future applications of satellite QCl — such as cryptography, novel paradigms like quantum teleportation, and advanced atmospheric monitoring based on modifying the optical signal during the downlinkl — to be of significant commercial interest. Our work is part of a study of satellite quantum communications that is ongoing under the auspices of the Italian Space Agency and the European Space Agency. The current schedule of this program, called Space-QUEST, should lead to the launch of the quantum terminal in space by the end of 2014.5

As well as the authors and their teams, researchers working with Cesare Barbieri at the Astronomy Department of the University of Padova and Giuseppe Bianco of the Italian Space Agency in Matera were intrinsically involved with the work reported here.

Paolo Villoresi is the head of the laser groups at the LUXOR Laboratory and the University of Padua. His research activities include quantum communication over long distances and the generation and application of coherent radiation in the femtosecond and attosecond regime.

Anton Zeilinger has conducted many experiments, including quantum teleportation, quantum cryptography, quantum computation, and quantum interference of large molecules. He recently received the new international Isaac Newton Medal of the British Institute of Physics. He is currently professor of physics at the University of Vienna and scientific director of the IQOQI.