A new solution to graphene production

As every schoolboy knows, the stuff in your pencil lead is graphite, a naturally occurring form of carbon, useful but not very interesting. What is more interesting is that graphite is made from a stacked system of layers, each just one atom thick. It was long thought that these graphene layers were unstable and that removing them from the parent crystal would cause them to roll up. This raised the question of how thin you could make graphite. Ten layers? Five? By peeling layers from a graphite crystal with sticky tape and then rubbing them onto a silicon dioxide surface, a team from the University of Manchester found a surprising answer: it is possible to produce graphite crystals just one atom thick.1 It soon became clear that this graphene had intriguing electronic properties. For example, due to the symmetry of its 2D honeycomb lattice, charge carriers in graphene appear massless.2 More important for microelectronic engineers, these carriers have ultrahigh mobility, opening the door to superfast transistors.3

The huge potential of graphene comes with one small catch: mechanical cleavage of graphite is a very slow process with very low throughput. As a result, graphene is the most expensive material known to man, costing approximately $1 per square micron.4 New, high-yield, cheap ways to make graphene are urgently needed. For microelectronics, the solution will probably be to grow graphene on silicon wafers using reasonably well known processes. However, for most other applications it is accepted that a method to produce graphene in liquids is required. Much progress has been made, with a number of groups having developed chemical techniques to split graphite into sheets of graphene-like material such as graphene oxide.5, 6 However, such materials tend to have many defects, thus altering the interesting properties. Attempting to resolve this problem, we recently demonstrated an alternative liquid-based process to exfoliate graphite to give defect-free graphene.7 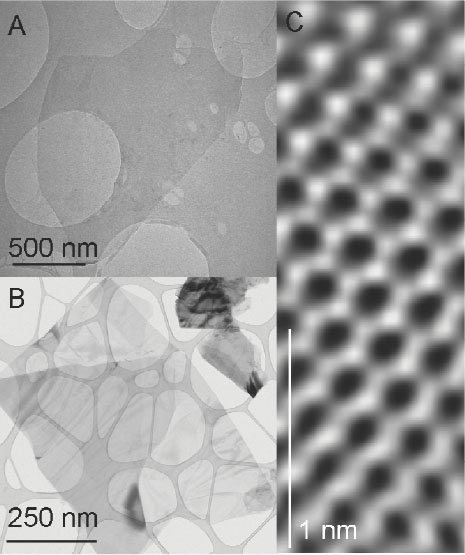 We used methods developed recently to obtain individual carbon nanotubes suspended in liquids. Nanotubes tend to aggregate together, which reduces their energy. But you can remove this propensity to aggregate if you place them in a liquid that binds to the nanotubes as well as they bind to each other. We found that liquids whose surface energy matched that of nanotubes gave stable suspensions of individual nanotubes.8 As nanotubes are rolled-up graphene, we suspected the same approach would allow us to split graphite into graphene.

We mixed graphite with a nanotube-suspending solvent and applied sonic energy. Initial tests showed that significant quantities of graphite could be suspended in this manner. To test whether the science was the same as for nanotube suspensions, we mixed graphite with dozens of carefully chosen solvents and measured how much graphite remained suspended after centrifugation. When plotted versus surface energy, it became clear that the amount of suspended graphite peaked sharply for solvents with surface energy close to that expected for graphite. The mechanism was the same.

The key question was, Had we suspended graphene or just small flakes of graphite? The high boiling point of our solvents precluded the standard approach of depositing the flakes on a surface and examining with a microscope. Instead of this, we dropped the suspension on special holey substrates designed for electron microscopy. The solvent tended to run off the substrates leaving small flakes deposited in its wake that could easily be found using a transmission electron microscope. We used electron diffraction to confirm the presence of monolayers and to estimate the number of layers by focusing on the flake edges. It was immediately apparent that about 30% of them were one atomic layer thick, similar to the monolayer shown in Figure 1(A). In addition, a number of bilayers, multilayers, and folded monolayers, as shown in Figure 1(B), were observed.

To make real progress, however, we had to show that the graphene was chemically unmodified and not highly defective. As a test, we used x-ray photoelectron spectroscopy, a technique that gives information on bonding in a material. This clearly showed that the graphene was not chemically modified. But the results did not rule out the possibility of defects. Consequently, we carried out Raman spectroscopy with the help of collaborators at the University of Cambridge. With great care, Raman spectra were obtained from individual graphene flakes, giving information on the presence of defects. The answer was unambiguous. The level was too low to measure, showing that our liquid processing was not introducing defects. The high quality of the graphene was elegantly confirmed by atomic resolution transmission electron microscopy, carried out by colleagues at the University of Oxford: see Figure 1(C). In principle, this production process can be scaled up to make very large quantities of defect-free graphene.

For now, it is becoming clear that graphene can be produced, cheaply and easily, in certain liquids at a reasonable yield. In the future, we hope to improve the yield, increase the flake size, and extend this method to aqueous systems. We expect that this method will be useful, not only as a low-cost and straightforward way to make graphene, but as an enabling technology for applications such as graphene-based composites and coatings.

Jonathan Coleman is an associate professor in the School of Physics and a principal investigator at CRANN. His current research focuses on the dispersion and exfoliation of nanomaterials. He also works on the production of functional nanostructured materials such as composites and thin films for electrical and mechanical applications.