The Fourier transform (FT) nicely represents a wiggling, sine-like data set with only a few peaks in the frequency domain. But while the FT is appropriate for simple stationary data like harmonic waves, complicated signals or images require more elaborate transforms. These transforms must catch fast local variations, detect blurred object contours, differentiate textures, and capture different size features. The standard discrete wavelet transform (DWT)1 has emerged as an appealing alternative to the FT. Its implementation relies on the iteration of low-frequency approximations and on the extraction of high-frequency details. The DWT thus yields a dyadic representation that divides the spectrum into low- and high-frequency bands. In addition, the transform is multiscale, capturing both big and small features. Some forms preserve orthonormality as well, an important property for filtering random noise.

To detect features like edges or surfaces, researchers have developed many extensions to wavelets. These extensions often add redundancy to the transform, whereby data is converted into more coefficients than samples. Surprisingly, such redundancy helps retain key image features with a smaller subset of significant coefficients. With so many options, picking the appropriate transform for a class of signals can be confusing. Recently, however, the dual-tree wavelet transform has reconciled representation power and simplicity. It is based on two sets of wavelets designed as a Hilbert (or quadrature) pair, similar to a sine and cosine signal.

We developed an extension to this transform, the dual-tree M-band wavelet decomposition, that possesses unique geometrical features. This decomposition approach provides a local, multiscale, directional analysis of images. Figure 1 shows the 2D wavelet spatial representation. The negatively and positively oriented shapes catch different directions and frequencies. We have extended2 the dyadic case (M=2) results of Kingsbury, Selesnick and Baraniuk3 to the M-band case. This extension to M≥2 improves the flexibility of the transform by decomposing n dimensional data into Mn trends (indexed in Figure 1 by m1 and m2 for n=2). It separates data into frequency bands and orientations at different scales. In addition, the dual-tree decomposition typically has a redundancy of 2 in the real case and 4 in the complex case. The decomposition can be either orthogonal or biorthogonal.4 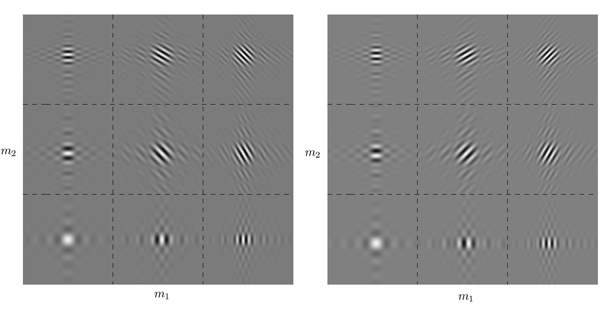 Our wavelet transform is composed of cascading M-band filter banks.5 To obtain the M-band trees, we must perform two M-band multiresolution analyses in parallel in the real case, or four in the complex case. To produce the redundancy, we combine a wavelet and its Hilbert transform.6 Successively applying the monodimensional transform on image rows and columns generates the separable, two-dimensional version. The dual-tree decompositions are almost shift-invariant, with each trend keeping the same characteristics when the data is delayed. They also offer directional selectivity. 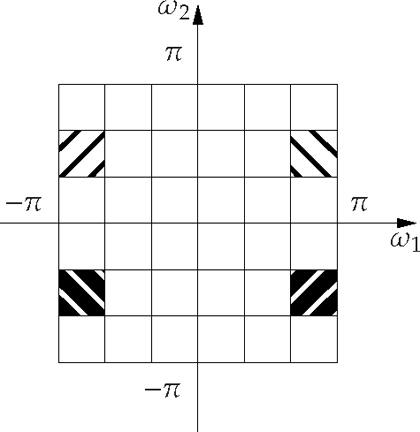 Figure 3. Direction selection in the 2D frequency plane for M=3. Each branch of the decomposition focuses on different quadrants in the frequency domain.

To obtain the best results when processing real-world data, it is important to pay attention to the continuous-dicrete domain transition. The wavelet transform, like many mathematical tools, is well defined in a continuous space formalism but is often used on sampled data. Since at least two transforms are applied to the same data set, we must use preprocessing to realign them with respect to the appropriate grid for each one.

After preprocessing and decomposition, we take into account remaining correlations in the transform domain. These correlations exist since the decomposition is made redundant, and some data features appear at different scales (see Figure 2). Unlike many other geometrical transforms, the Hilbert relationship between the wavelets enables the modeling and explicit calculation of the coefficient correlations.8 This modeling is especially important for further processing in the wavelet domain.

Our transform can be applied to more involved processing tasks, such as denoising or deconvolution. Wavelets are an appealing option for this work because they allow local modification of coefficients. The simplest approach, called thresholding or shrinkage,9 suppresses coefficients below a threshold. This method relies on the assumption that useful data features, which are well concentrated by the transform, will be kept, while small spread noise coefficients will be cancelled. With a precise knowledge of induced correlations, we can better preserve groups of meaningful neighboring coefficients.

We have also proposed very efficient noise estimators using M-band dual-tree wavelets.10 Figure 4 shows the effect of applying the transform. The top left satellite image has been corrupted by heavy Gaussian noise (top right), making the details barely distinguishable. Efficient noise detection combined with dual-tree wavelets yields the bottom image. Most of the salient features have been blindly recovered, which would have been impossible with more standard filtering techniques.

The transform may also prove useful for data reconstruction. Since the transform is redundant, we envision several reconstructions. We proposed2–4 using an optimal synthesis frame operator based on pseudo-inverse techniques. 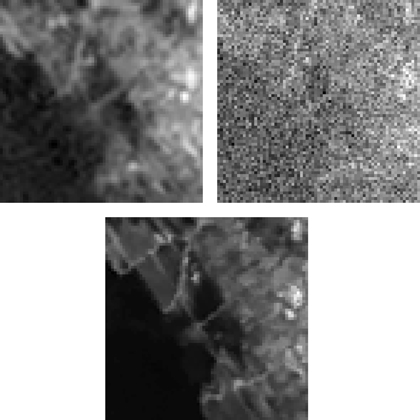 The M-band dual-tree wavelet transform has already proven its efficiency in several domains, including deconvolution,11 multispectral denoising10 and coherent noise removal in seismics.12 This approach will likely benefit other domains, including image compression13 and reconstruction. Future work will focus on new decompositions to analyze high-dimensional data from next-generation imaging systems.

Caroline Chaux received her PhD in signal and image processing in 2006 from the Université Paris-Est, France. From 2006 to 2007, she worked at the National Institute for Research in Computer Science and Control in Sophia-Antipolis, France. In 2007, she joined the Informatics Laboratory at the Université Paris-Est. She received the Best Student Paper Award at the IEEE International Conference on Acoustics, Speech, and Signal Processing in 2005.

Jean-Christophe Pesquet received his PhD from the Université Paris-Sud (XI) in 1990, and in 1999 he earned a postdoctoral degree authorizing him to direct the research of others. From 1991 to 1999, he was a lecturer at the university, and a researcher at the Systems and Signals Laboratory at the French National Center for Scientific Research in Gif-sur-Yvette. He is currently a professor at the Université Paris-Est and a researcher in the Informatics Laboratory.

In 2000, Laurent Duval received his PhD in signal processing from the Université Paris-Sud (XI) in Orsay, France. In April 2000, he joined the French Institute of Oil. He now applies signal processing to geoscience, materials characterization, chemical analysis and engine control. His interests include filter bank techniques as applied to signal detection, filtering and data compression.