Can LiFi stave off the wireless spectrum crunch?

With LiFi's arrival on the horizon, does this mean lights out for WiFi? Exploring the LED's future as a communication link.

In July 2011, UK researcher Harald Haas (Figure 1) showed how a humble LED bulb, equipped with a transmitter driver chipset, could stream high-definition video to a computer. Digital-to-analog converters within the unit rapidly modulated the LED -- at speeds unnoticeable to the naked eye -- to encode data. This was then transmitted to a photosensitive detector and receiver on a desktop, decoded and converted to a high-speed data stream.

The world was startled, visible light communications was thrown into the limelight, and Haas' technology, dubbed LiFi, had just taken center stage.

"At the time we showed people what we could do, in principle, with the visible light spectrum," Haas, Chair of Mobile Communications at the University of Edinburgh, tells SPIE Newsroom. "I'm now hoping we will have LiFi in all of our everyday light sources from streetlights to headlights, and in our homes, offices museums, and more."

"Do this and we will have unlocked the Internet of Things," he adds. 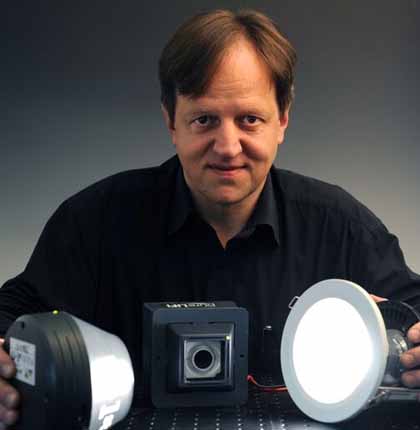 Since 2011, progress has been as rapid as LiFi's data rates. In the lab, as part of the Ultra-Parallel Visible Light Communications Project (UP-VLC), Haas and colleagues have reached blisteringly fast 10Gbit/s data transmission speeds.

Here they developed micro-LED arrays to transmit 3.5Gbit/s via each red, green and blue micro-LEDs in parallel. They also applied novel spatial modulation orthogonal frequency divisional multiplexing so the micro-LED elements within the array could beam thousands of streams of light in parallel, multiplying the volume of data transmitted at any one time.

"LEDs have been the bottleneck in data rate so as part of this project, we wanted to develop a technology that would unlock the vast amount of data rates available in the visible light spectrum," says Haas. "We've achieved 10Gbit/s with these LEDs, but can reach 100Gbit/s using red, green and blue laser diodes."

At the same time, the researchers have also fabricated sensitive photodetector and receiver arrays using high-gain avalanche photodetectors to detect the encoded light streams from the LEDs.

According to Haas, a detector-receiver array may have direct line of sight with a LED transmitter, but will also receive "residual" light that has reflected off surrounding walls, objects, the ground and ceiling.

"If you block the strongest incoming ray, residual light still reaches the receiver, and a good photodetector on the receiver side will still make sense out of the weakest of signals," he says.

But while point-to-point demonstrations have proven LiFi to be a serious alternative to RF-based communications, the technology's real strength lies in networking. Detector-receiver arrays also house infrared diodes to provide an uplink connection back to the LED-based LiFi access point. And by combining numerous micro-LED transmitters and receiver assemblies (Figure 2), the researchers can take LiFi beyond a straightforward point-to-point communications system, and create a multiple-input multiple-output (MIMO) transmission network. Transmitters and receivers can even be combined in a single unit to create a single-input, single-output link. 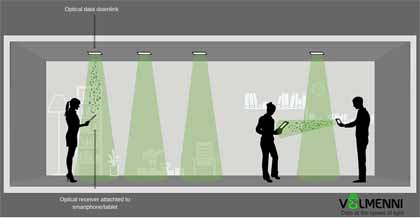 Figure 2. Optical data downlink from the light fixtures above. (Velmenni)

As Haas emphasizes: "The LiFi communications system can serve many users. It allows multi-user access, has an uplink and downlink, and allows handover."

"The coverage of each LED lamp is up to 10 m2 and when you leave that space, you are illuminated by another lamp, handover takes place, and you don't lose wireless connectivity," he adds.

Haas is also confident ambient light will not interfere with transmissions as the receivers are only sensitive to the modulating LED light.

"Even the 100 Hz flicker from an incandescent light bulb is not an issue, as our modulation frequency starts at 1 MHz," he says. "As long as fluctuations are outside our modulation, these aren't an issue."

In the meantime, Haas and colleagues have also set up a company, pureLiFi, to commercialize the technology. Their first transmitter, 'Li-1st', provides point-to-point Internet access, delivering data at 5MB/s in both the downlink and uplink, for up to 3 meters.

Meanwhile, 'Li-Flame' delivers a multi-access wireless network to many users, providing a glimpse of what has been developed in the lab. It comprises two key components: a ceiling transmitting unit that connects to an LED light fixture and serves as a Li-Fi access point; meanwhile, a desktop receiving unit connects to a client's device via a USB port, so users can roam within a room or building while connected.

The 10MB/s uplink and downlink data rates match average WiFi speeds but are a far cry from the breathtaking gigabit laboratory speeds. However, Haas points out: "We've developed these products to work with LEDs that are already on the market."

Yet many commercial LEDs use a phosphor coating to convert blue light to white light, and this coating limits how fast the devices can be modulated, slowing down data rates. Haas isn't fazed, saying: "Even with slow, phosphor-coated LEDs, we can exploit parallelism in the spatial dimension."

Still, he is eager to highlight how swapping these LEDs for off-the-shelf laser diodes -- as experimented with in the UP-VLC -- boosts data rates beyond 100Gb/s.

"Laser LEDs have bandwidths up to 1 GHz, as opposed to 20 MHz for the phosphor-coated LEDs, so we can also encode data in the frequency domain to achieve fast data rates," he says.

"But working with existing infrastructure is key, and we will closely monitor commercial LED devices and adopt new technologies so our data rates match state-of-the-art technology."

Indeed, pureLiFi has recently joined forces with France-based LED lighting business, Lucibel, to develop a LiFi luminaire. The luminaire should be ready for market by late 2016, with the first installation taking place at the headquarters of a Paris-based property developer, Sogeprom.

Haas is not alone in his hot pursuit to commercialize a light-based alternative to RF wireless communications. An India-based startup, Velmenni, recently set up a two-way LiFi network across a series of streetlights spanning 30m, in Estonia.

According to chief executive Deepak Solanki, its LiFi network was based on a transceiver that included an LED array and LED driver, as well as a standard photodiode receiver. Transceivers were embedded into the streetlights to transmit data, from streetlight to streetlight, at 10Mbit/s.

"We also integrated a wireless mesh networking protocol through the lighting system to ensure the sending of data from one street lamp to another," he says. "Using this network we can send high-definition videos over relatively large distances."

At the same time, Velmenni has developed a smart LED bulb -- Jugnu -- to downstream data to smartphones at 10Mbit/s (Figure 3). Other key players, including LVX System (US), Israel-based RiT Technologies, IBSENTelecom of Norway and Japan-based Nakagawa Labs, are also demonstrating wireless optical networks. And not a moment too soon. 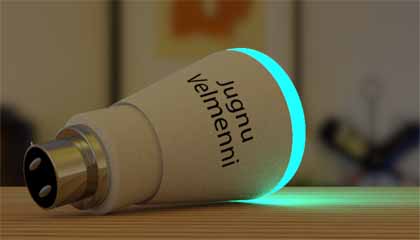 The US Federal Communications Commission has long warned of a looming spectrum crisis as data-hungry mobile devices eat into ever more radio frequency bandwidth. Meanwhile, Haas himself anticipates that by 2025, the radio frequency spectrum will not provide sufficient resources for wireless data traffic.

Mark Leeson from the Communications Research Group at Warwick University (UK) agrees. "Our increase in data produced is simply incredible," he says. "In terms of coding and implementing more efficiencies, we've still got a long way to go, but we are going to run out of bandwidth."

While Leeson questions how quickly industry will adopt a new technology, he believes wireless optical networks will have a place beside saturated RF-based networks.

"[LiFi] isn't going to save us from a spectrum crunch; we will also run out of optical space," he says. "But it will help to put this off."

Indeed, Haas and colleagues have already carried out "extensive research" on a hybrid WiFi/LiFi system, he says.

"Let me be clear, we will never see a LiFi or WiFi situation; it's going to be WiFi and LiFi. And as [industry] installs new lighting systems, we will see more and more of the Internet enabled by a light source. Incandescent light bulbs just serve one purpose, light, but in 20 years I see a world where ceiling lights have more applications," he adds.

"My ambition is to have iLight in the same way that we have the iPhone."

Rebecca Pool is a freelance writer based in the UK.