Former MIT president Charles M. Vest - a tireless advocate for research and science, and a passionate supporter of diversity and openness - died on 12 December of pancreatic cancer at his home in the Washington area. He was 72.

As MIT's 15th president, serving from 1990 to 2004, Vest led the Institute through a period of striking change and growth. A mechanical engineer by training, Vest was president of the National Academy of Engineering from 2007 until earlier this year. He was awarded the 2006 National Medal of Technology by President Bush.

Consistent with Vest's optimistic interest in the expansion of knowledge, MIT's research enterprise grew substantially during his tenure. Vest spearheaded expansions into fields including brain and cognitive sciences, nanotechnology, genomic medicine, biological engineering, engineering systems, and new media, among others. 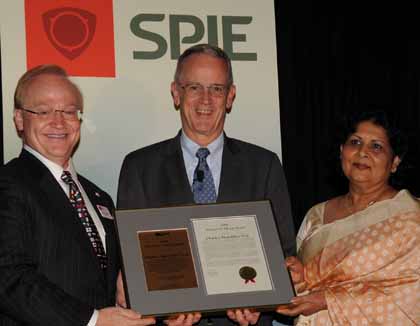 "Personally and professionally, Chuck Vest set an exceptional standard of intellectual clarity, moral courage, and generosity of spirit," MIT President L. Rafael Reif says. "And there was no better example of his vision and values than the creation of MIT OpenCourseWare - the simple, elegant, unprecedented idea that MIT should make all of its course materials available online to anyone in the world, free."

On assuming the MIT presidency - an occasion he later described as "a call to national service" - Vest set out to rebuild public understanding of and support for higher education and research. He became a regular presence in Washington, championing research, science, and innovative partnerships among universities, government, and industry. Vest logged more than 100 visits to the nation's capital, personally conferring with some 250 federal officials during his time as MIT's president.

After the terrorist attacks of Sept. 11, 2001, Vest became a national spokesperson on the importance of higher education and research to the nation's well-being. As research universities grappled with the balance between security and openness, Vest argued directly, and passionately, in favor of the latter. "Knowledge creation thrives in openness and suffers in isolation," he wrote in 2002.Vest earned a BS in mechanical engineering from West Virginia University in 1963, and MS and PhD degrees in mechanical engineering from the University of Michigan in 1964 and 1967, respectively.

Vest joined the Michigan faculty as an assistant professor in 1968, teaching courses on heat transfer, thermodynamics, and fluid mechanics, and conducting research in heat transfer and engineering applications of laser optics and holography. He and his students developed techniques for making quantitative measurements of various properties and motions from holographic interferograms, especially the measurement of three-dimensional temperature and density fields using computer tomography. He became an associate professor at Michigan in 1972 and a full professor in 1977.

In 2005 Vest served on the committee that produced the report "Rising Above the Gathering Storm" for the National Academies, to propose a response to globalization and the ebbing influence of U.S. science and technology.

In 2009 he received the Chandra S. Vikram Award in Optical Metrology from SPIE. The award citation recognized Vest for "major contributions to the mathematical analysis of holographic interferometry taken through flames and other 3D objects and also for major contributions to technology as MIT President, President of the National Academy of Engineering, and his service on numerous government advisory boards."

Vest is survivied by his wife, Rebecca, two children and four grandchildren.