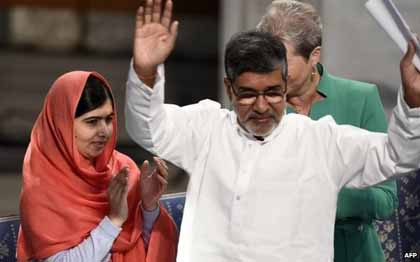 The Nobel Prizes were awarded today, honoring distinguished scientists and researchers, many from the photonics community, as well as two "champions of peace." The Peace Prize ceremony took place in Oslo, and the other Nobel awards were presented at the Stockholm Concert Hall.

The Nobel Prize in Chemistry 2014 was awarded jointly to Eric Betzig, Stefan W. Hell and William E. Moerner "for the development of super-resolved fluorescence microscopy".

The Nobel Prize in Physics 2014 was awarded jointly to Isamu Akasaki, Hiroshi Amano and Shuji Nakamura "for the invention of efficient blue light-emitting diodes which has enabled bright and energy-saving white light sources".

The Nobel Peace Prize 2014 was awarded jointly to Kailash Satyarthi and Malala Yousafzai "for their struggle against the suppression of children and young people and for the right of all children to education".

SPIE congratulates all the Nobel Laureates for their accomplishments and contributions to humanity.