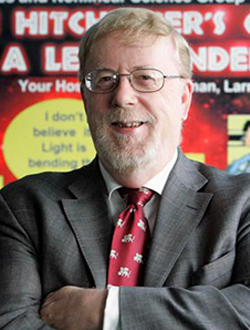 SPIE Fellow and Professorial Research Fellow at Salford University's School of Computing, Science, and Engineering, Allan Dawson Boardman died in the early hours of Saturday, 24 November, after a short period in hospital, according to his son, Mark Boardman. He was 81. "My father was actively engaged with the research communities of his specialist fields until very near the end," noted Mr. Boardman. "It would be no exaggeration to say that physics was his life."

Across his career, Boardman made many seminal contributions through his theoretical work on nonlinear wave propagation, including research on surface polaritons, nonlinear guided waves, solitons, magneto-optics, and metamaterials. One of the earliest scientists to delve into the area of surface plasmons, his work in that area became of fundamental importance to the field of plasmonics. Boardman received his Doctor of Science degree from Durham University from then-Chancellor Peter Ustinov.

"I first met Allan at Photon ‘04 in Glasgow and it was clear from the onset that we had many interests in common," said SPIE Senior Fellow and University of Glasgow Honorary Research Fellow Nigel Johnson. "Allan became a great advocate for Metamaterials and contributed many invited talks to SPIE on that subject and particularly on Gyrotropic Metamaterials. Although firmly in the theory camp, he was a strong supporter of metamaterials for organic sensing - my own particular area of interest - and self-organized metamaterials. We shared the role of chair several times on SPIE's Metamaterials conference series and worked closely putting the programs together. But it is his kindness and conviviality and the discussions we had over food and drink that I will most miss."

"He was a reliable colleague, a remarkable member of the photonics community and a fine person with subtle, typically English humor," said SPIE Fellow and King's College London professor Anatoly Zayats, who, together with SPIE Member Kevin MacDonald, of the University of Southampton, co-chaired the SPIE Europe Photonics Metamaterials conference. "He was a great supporter of SPIE and contributed greatly to success of SPIE metamaterials conferences. Allan was outstanding through his dedication to optics and photonics and encouragement of young scientists throughout his life in whom he took great interest throughout their careers."

Magneto-optics: a critical review
A straightforward review of magnetooptics is given, emphasising both linear and nonlinear guided wave properties.