Nonlinear optical phenomena are becoming increasingly important as diagnostics for a wide range of physical properties. In nonlinear optics (NLO), light of one or more frequencies impinges on a sample, and light at a different or several different frequencies emerges. A simple example is second-harmonic generation (SHG), where the wavelength of the light that emerges is exactly half that of the incident beam. Such phenomena, although essentially known since the beginning of optics, became particularly important as lasers came into widespread use. Development of titanium-sapphire lasers generated a second surge of interest, since these produce very high peak fields at low average powers and hence can generate relatively large NLO responses without destroying samples. 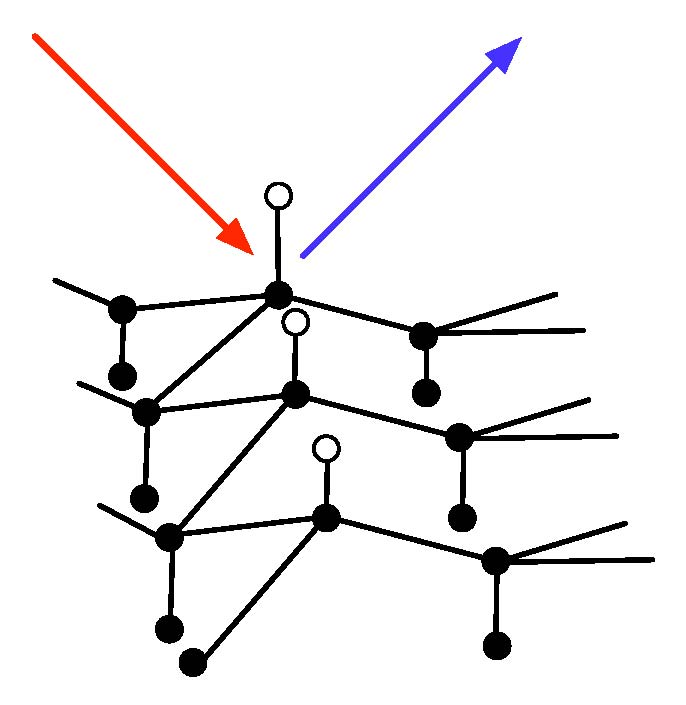 NLO processes are generally treated phenomenologically, a descriptive approach that uses empirically determined numbers to connect incoming and outgoing fields. Because fields are vectors, having direction as well as magnitude, three numbers (one per direction) are needed to describe them. Linear optics (LO) is characterized by one incoming and one outgoing field, so the connection requires a set of nine numbers called a second-rank tensor. Generally not all nine are needed, depending on symmetry. With SHG there are two incoming fields and one outgoing field, so the connection requires a third-rank tensor with 27 numbers. Again, owing to symmetry the actual number required is usually less.

While complete, phenomenological descriptions do not provide insight into the physics of NLO on the atomic scale. In the last few years we have addressed this shortcoming by developing a bond model where NLO phenomena are described using physically meaningful parameters defined at the atomic level.1 This semiclassical approach describes the emerging NLO radiation as a result of anharmonic acceleration of bond charges either as a result of a nonlinear restoring force or a variation of field strength over the range of motion (spatial dispersion), both of which become more important as the strength of the driving field increases.

In developing our model, we essentially turned back the clock 100 years, expanding on concepts used in 1912 and 1915 by Peter Paul Ewald and Carl Wilhelm Oseen, respectively, to describe LO and and summarized in the largely forgotten Ewald–Oseen extinction theorem, which provides an atomic-scale description of LO. Simply stated, any optical response is determined in four steps following the basic physics of the process. First, the local driving field is evaluated at the charge site. Second, the equation of motion

of the bond charge is solved for the acceleration

. In the NLO case we consider the bonds to be anisotropic and include anharmonic terms in addition to the Hooke's Law restoring-force baseline, which yields the LO response. Third, the radiation that results from

is calculated. Fourth, the radiation from all bond charges is summed coherently. For linear optics the approach is complicated by the fact that the emerging radiation has the same wavelength as the incident radiation and approximately the same intensity. Hence the entire problem must be treated self-consistently. In contrast, in NLO the radiation emerges at different wavelengths and is typically orders of magnitude weaker, so the four steps can be treated independently. The surprising conclusion is that NLO is actually simpler than linear optics.

We became interested in the topic when investigating interface bonding between silicon (Si) and high-k dielectrics. Here, SHG is forbidden in the bulk of both Si and overlayer, and arises from the monolayer of crystallographically ordered and asymmetric bonds at the interface. Previous work described similar SHG results on oxidized Si using 11 Fourier or 14 of the possible 27 tensor coefficients.2 Yet the SHG data itself was simple, suggesting that a more efficient description was possible. Recognizing that only a single monolayer was involved and that physics takes place in real space in real time, we investigated a bond-model description. We found that all data could be explained using only three physically meaningful bond parameters, not only greatly simplifying the description but giving credence to the approach. Also, by building in crystal symmetry at the bond level, the macroscopic tensor descriptions emerged automatically.

In a recent publication3 we did a thorough treatment of SHG from amorphous materials as a preliminary to addressing SHG from nanoscopic Si spheres distributed randomly in glass. In addition to the two effects mentioned above, we found that comparable contributions arose from magnetic effects and retardation. The latter is a purely relativistic effect that arises because the speed of light is finite. As a result the signal emanating from the near point of the charge excursion from the perspective of an observer arrives slightly sooner than that from the far point, generating a small anharmonicity in what otherwise would be a sine wave. We also demonstrated the importance of diffraction in determining the relative phases of the different contributions and establishing the general shape of the emerging beam for incoming Gaussian-beam excitation. This work illustrates two of the major advantages of the bond picture: the capability of providing simple and easily understandable physical pictures of what appears to be a complex phenomenon, and of describing the consequences with correspondingly simple analytic expressions.

In the 1960s, bond models were widely used to describe static polarizabilities, which in the linear case are important in determining the capability of capacitors to store charge. However, they fell out of favor with the development of band-structure descriptions of linear optics. Our added value is: first, to recognize that the four-step model is much better suited to NLO than linear optics; second, that the bond picture accurately represents the physics of the situation on the atomic scale; and third, that bond descriptions lead to simple physical models and analytic descriptions. We have demonstrated similar successes with dipole-forbidden bulk effects and terahertz, third-, and fourth-harmonic generation.3

It is clear from these results and those associated with other NLO phenomena currently being investigated that the late-1960s demise of the bond picture was premature. Additional applications are also anticipated in the future. For example, we are currently applying these concepts to Raman scattering, which describes the interaction of light with a crystal lattice.

Eric Adles is a postdoctoral research associate. After receiving his BS degree in physics in 1994, he worked in information technology and semiprofessionally as a jazz pianist. Returning to school, he completed his PhD degree in 2007 on nonlinear optics. His current project is the heteroepitaxial growth of zinc oxide.

David Aspnes is distinguished university professor of Physics. He received his PhD in 1965 from the University of Illinois-Urbana/Champaign. After two years as a postdoctoral student, he spent 17 years at Bell Laboratories, Murray Hill, NJ, as a member of the technical staff, then eight years at Bellcore as a department head. He joined the NCSU faculty in 1992. He has consulted for various industries, holds 23 patents, and has over 400 publications.