Since the time of Thomas Edison, incandescent light bulbs have been the dominant light source for illumination. Today, incandescent bulbs still hold crucial advantages. They produce a warm white light and can be dimmed easily using inexpensive controls. They have a relatively inexpensive first-cost per lumen, a long-established infrastructure, and do not contain hazardous materials such as mercury. However, because of their relatively low energy efficiency, incandescent bulbs are being replaced rapidly in many areas. It is time to re-visit the fundamental limit of the incandescent bulb and to improve its efficiency.

Incandescent bulbs emit light in a manner closely resembling Plank's law of blackbody radiation. The law describes how a body capable of absorbing all radiation contacting it (a blackbody) will emit at a given range of wavelengths dependant on its temperature. The inefficiency inherent in an incandescent bulb is due to the fact that it emits both infrared and visible light at temperatures between 2000 and 3000K. Specifically, the infrared portion of the radiation consumes about 88% of the input electric energy and becomes wasted heat (see Figure 1). Hence, recycling infrared light into useful visible light would improve incandescent efficiency. 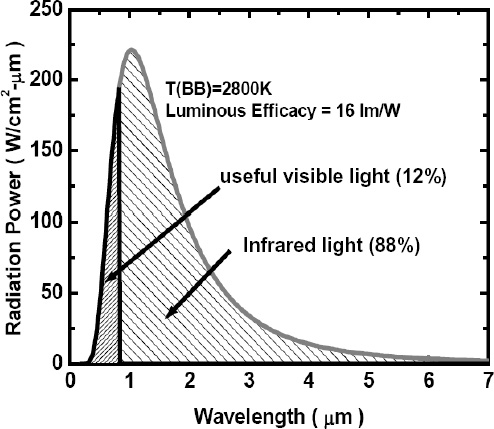 Figure 1. A blackbody radiation curve at T=2800K, which is a typical operating temperature of a 100W incandescent bulb. Approximately 88% of the light is emitted in the infrared region. BB: blackbody.

Recycling processes have previously been developed in the form of reflecting envelopes using either a dielectric metal film stack1,2 or a dielectric multi-layered film.3 However, for both structures the reflectance in the near-infrared region is not high enough to bounce back all the infrared light. To overcome these limitations, we employed a two-dimensional metallic photonic band gap (PBG) filter architecture to enclose the incandescent filament. The filter acts as a perfect transmitter for the useful visible light and a perfect reflector for the undesirable infrared light. The reflected light is re-absorbed which, in turn, helps to heat up the filament. This infrared recycling process has two major energy consequences. First, it reduces the amount of electricity required to maintain a hot filament and thus improves electric-to-optical conversion efficiency. Second, it reduces the thermal radiation of the bulb as infrared photons cannot escape. With this approach, the energy efficacy of an incandescent light bulb can be improved by as much as eight times. Accordingly, the cost of a million-lumen-hour is reduced to $1.00–$2.00.

We used silver as the metallic material because it has a low intrinsic absorption in the visible and near infrared wavelengths. The low absorption of silver is key to simultaneously achieving a high transmittance in the visible and a high reflectance in the infrared regions. A metallic PBG filter is also more practical to use as it is robust against thermal stress at high temperatures. 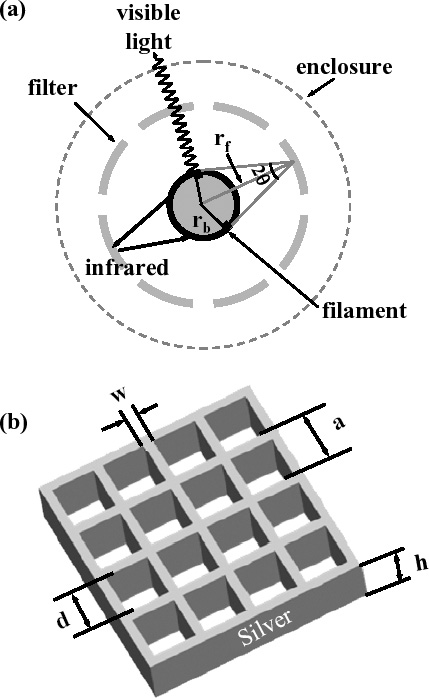 Figure 2. (a) The photon recycling scheme. (b) Schematic of the 2D metallic photonic crystal where 'a' is the pitch, 'd' is the size of the air opening, 'w' is the bar width, and 'h' is the thickness. Silver is used as the metal due to its low absorption in the visible and near infrared wavelengths. rf: radius of the filter. rb: radius of the blackbody filament, here a sphere.

To illustrate the validity of our approach, we have employed an ideal system that has a spherical blackbody filament enclosed by the filter: see Figure 2(a). The maximum luminous efficacy reaches 125lm/W. The details of the calculation were reported recently.4 For general purpose illumination, not only the efficiency but also the color quality is important in evaluating a bulb. The color quality of a bulb is commonly characterized by the correlated color temperature (CCT), used to categorize color tone, and the color rendering index (CRI), which measures the ability of a bulb to reproduce the true color of objects. If the CCT is lower than 3300K the color is categorized as a warm tone, whereas if the CCT is higher than 5300K the color is categorized as a cool tone. The CCT of our incandescent bulb did not exceed 3500K, indicating the filtered light is in the desired warm range. The CRI has a range between 0 and 100, with 0 being the minimum and 100 being the maximum color rendering capability. The color rendering index of our new light bulb is calculated to be between 68 and 90, better than that of a standard fluorescent lamp with a CRI of approximately 60.

Photon recycling via a metallic PBG filter is a promising new route to creating a ‘cool’ light bulb. Our next step is to study a cylindrical filter geometry that is comparable to the commonly used tungsten-filament configuration.

Shawn-Yu Lin is an institute constellation professor and professor of physics at Rensselaer Polytechnic Institute. His expertise is in the interaction of light with hierarchy nanostructure. He is a fellow of the American Physical Society, a fellow of the Optical Society of America, and a distinguished member-of-technical-staff at Sandia National Laboratories