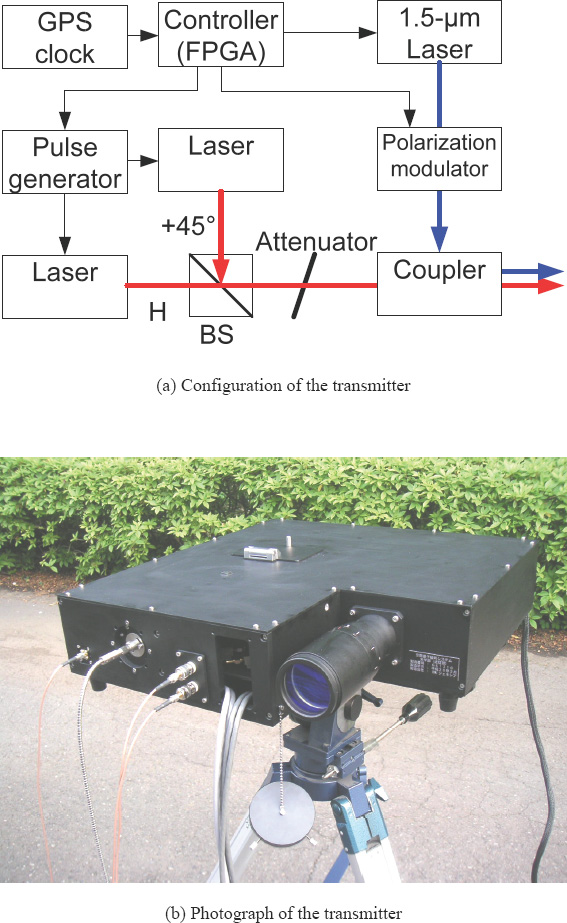 At present, numerous fiber-based quantum cryptography systems are commercially available.5–7 However, optical fiber quantum key distribution (QKD) is limited to a distance of approximately 100km due to transmission losses and nonlinear polarization in the optical fibers.1 Free-space QKD enables long-distance transmission of photons; therefore, ground-to-satellite quantum cryptography is an ideal application for global QKD.8 QKD systems use photon polarization states to transmit information. One of the drawbacks of polarization-based ground-to-satellite quantum cryptography is that the attitudes of the transmitter and the receiver rotate relative to each other. Therefore, it is necessary to continuously compensate for the resulting change in polarization direction.

The National Institute of Information and Communications Technology (NICT, formerly Communications Research Laboratory, or CRL) has developed a prototype free-space quantum cryptography system. This system uses weak coherent light5 with polarization modulation. NICT has also developed a polarization tracking method. Figures 1 and 2 show the configurations of the transmitter (Alice) and the receiver (Bob), respectively. The wavelength of the lasers for the single photon quantum channel is 0.86μm. A 1.5μm wavelength laser is used for the synchronization of the 0.8μm quantum photons and also for data transmission at 20MHz. The transmitter synchronizes the global positioning system (GPS) clock, generates weak coherent pulses, and produces the random signal for polarization modulation. A field programmable gate array (FPGA) performs signal processing. The receiver synchronizes data clock recovery, generates gate pulses for the single photon counting modules (SPCMs), and generates random signals for polarization modulation. After processing by the FPGA, the data is recorded on storage devices. 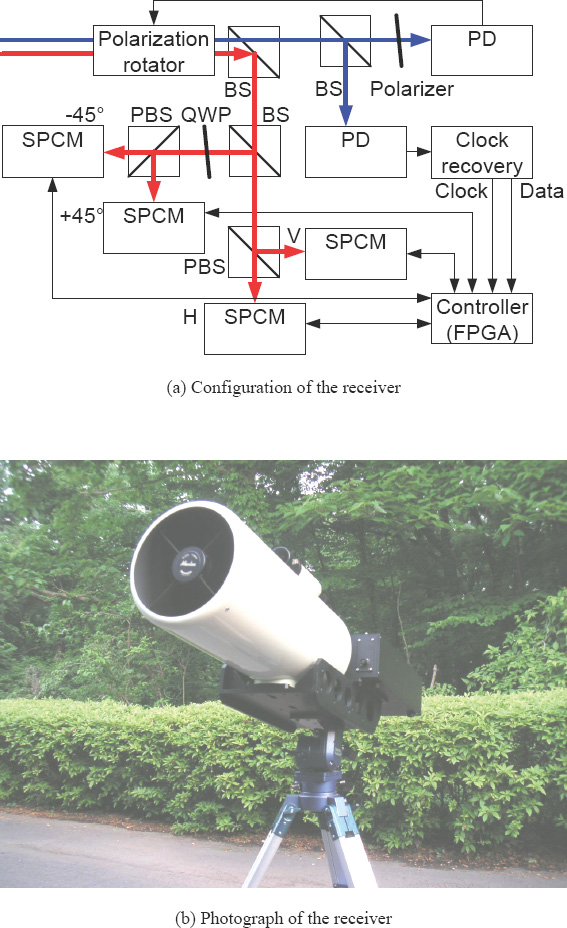 In conclusion, we proposed a polarization tracking scheme that uses a polarization rotator. The polarization direction could be determined when two mobile terminals were moved relative to each other by using a 1.5μm reference polarization modulated signal. The application of this method did not require information on the attitude of the transmitter. Therefore, polarization tracking was necessary only at the receiver side. The use of quantum cryptography in mobile networks will increase the security of communications. In particular, future applications of quantum cryptography in long-distance transmission systems will be significant in space communications.

Morio Toyoshima joined the National Institute of Information and Communications Technology (NICT) in 1994. He was involved in the development of the Optical Inter-orbit Communications Engineering Test Satellite (OICETS) at the Japan Aerospace Exploration Agency (JAXA) from 1999 to 2003. He spent one year as a guest scientist at Vienna University of Technology, Austria, in 2004. In 2006 he conducted ground-to-OICETS laser communication experiments at NICT. His research interests include laser beam propagation through atmospheric turbulence, optical space communications, and quantum cryptography.