Silicon photonics—the fabrication of optical components and systems in silicon chips by leveraging cost-effective silicon integrated circuit manufacturing—has seen considerable activity over the last few years, with major breakthroughs in modulation, fiber-to-chip coupling, and wavelength-division multiplexing filters. These components have been integrated into complex systems together with custom designed CMOS circuitry.1,2 On the other hand, the generation and detection of light remains a much more challenging problem. Silicon, being an indirect bandgap semiconductor, does not provide an efficient platform for light generation, and its vanishing absorption coefficient at wavelengths longer than 1μm hinders its use for photodetection in the near-infrared optical communication wavelengths (1.3 and 1.55μm). Given the importance of an integrated source for a CMOS optical transceiver, several attempts have been made to enhance the light emission properties of silicon, but even the best results lag behind the performance of a typical III-V laser source. When it comes to near-infrared photodetection, however, high-performance CMOS-based devices relying on the high absorption coefficient of germanium have been achieved.3

Today, optical communication receivers use high-performance, discrete, InGaAs photodiodes, with several drawbacks arising from the hybrid nature of the technology. The full receiver chain cannot be tested waferscale, which results in yield fall-out after complete assembly. Furthermore, these devices are difficult to scale to multiple channel applications, as each channel requires a separate, expensive, and large component. Significant financial benefits may be achieved through the use of embedded photodetectors.4 Embedding the photodetectors directly on the wafer will eliminate the costs associated with the assembly and testing of multiple components. This technology will allow a very large number of photodetectors to be grown directly on a die during wafer manufacturing thus reducing the bill-of-materials cost. It also enables easy channel count scaling, better controllability, and innovative architectures, since additional photodiodes can be added at virtually no cost. Finally, the complete opto-electronic receiver solution can be economically tested at the wafer scale. 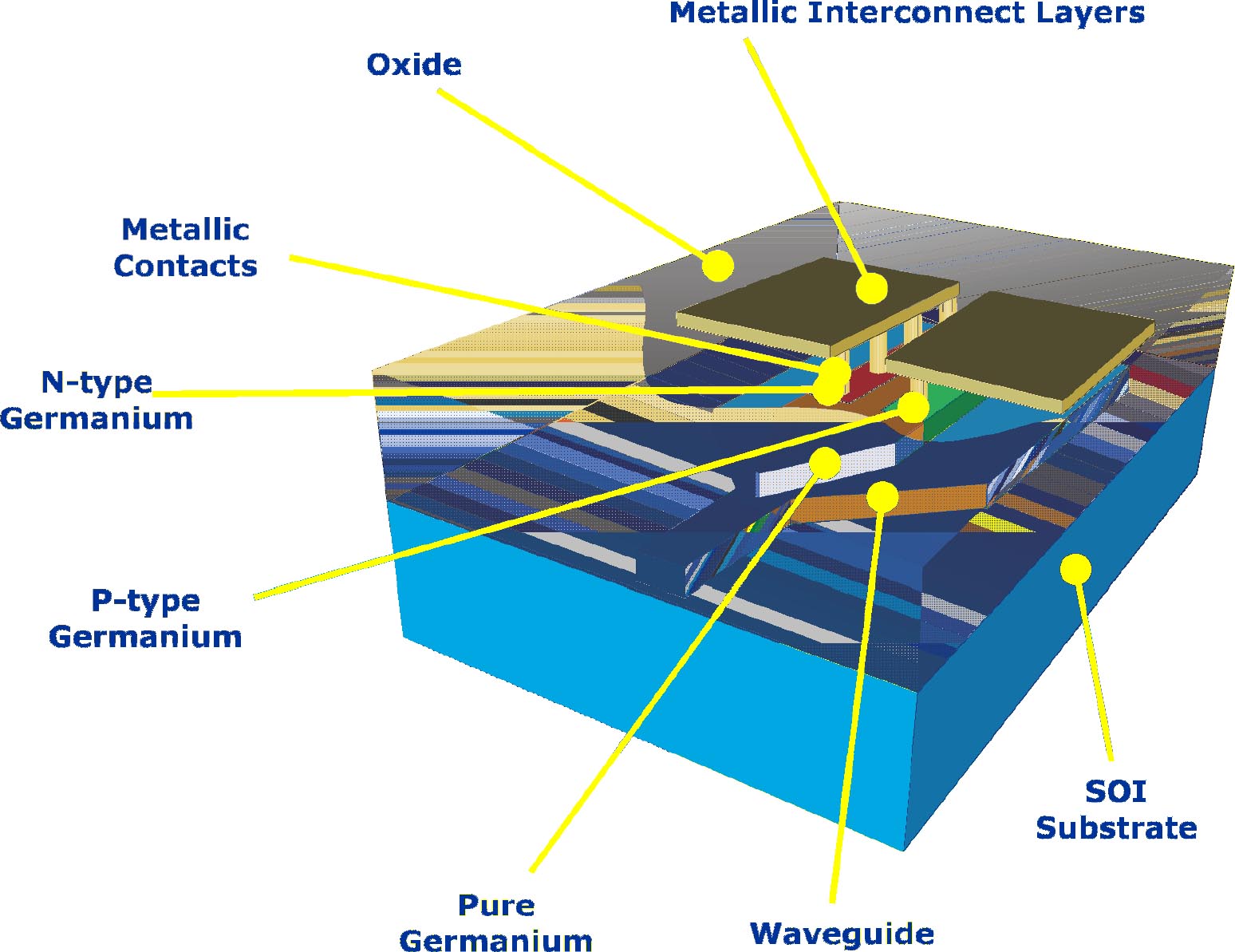 Germanium waveguide photodetectors also enable the design of high-speed optical receivers with substantially better performance than any other available photodetector. With discrete devices, receiver sensitivity is limited by the capacitance of the bulky detector. Thanks to the much smaller capacitance of waveguide detectors, the receiver electronics can be redesigned with much higher performance.

A number of key challenges must be overcome to successfully integrate germanium photodetectors into a CMOS process. Geometry is important, since the photodetector must physically fit into the space allowed for a metal-oxide-semiconductor transistor. This automatically excludes the possibility of using a traditional, surface-illuminated device in which light shines perpendicularly to the germanium film because the film must possess a thickness of several microns to absorb a sufficient amount of light. In a waveguide photodetector, the germanium film can be very thin since the light propagates inside the plane of the germanium film, and film thickness does not limit absorption efficiency.

Thermal budget limitations constrain the type of process that can be used for epitaxy and, eventually, the resulting material quality. It has been essential to develop a low-thermal-budget process that could fit into a standard CMOS wafer fabrication flow without affecting the performance of the transistors and other optical devices, while maintaining a reasonable material quality.

A typical germanium-on-silicon waveguide photodetector fabricated by this process is shown in Figure 1. Infrared light is brought to the device input by a silicon-on-insulator waveguide and quickly deflected into the absorbing germanium layer, due to the much higher refractive index of the latter compared to silicon (4 vs. 3.5). Silicon-germanium alloys are more common in Bi-CMOS platforms for the fabrication of heterojunction bipolar transistors than the pure germanium used here. The choice of pure germanium allows the extension of the spectral response of these devices to longer wavelengths, up 1600nm, where silicon-germanium absorption ceases. 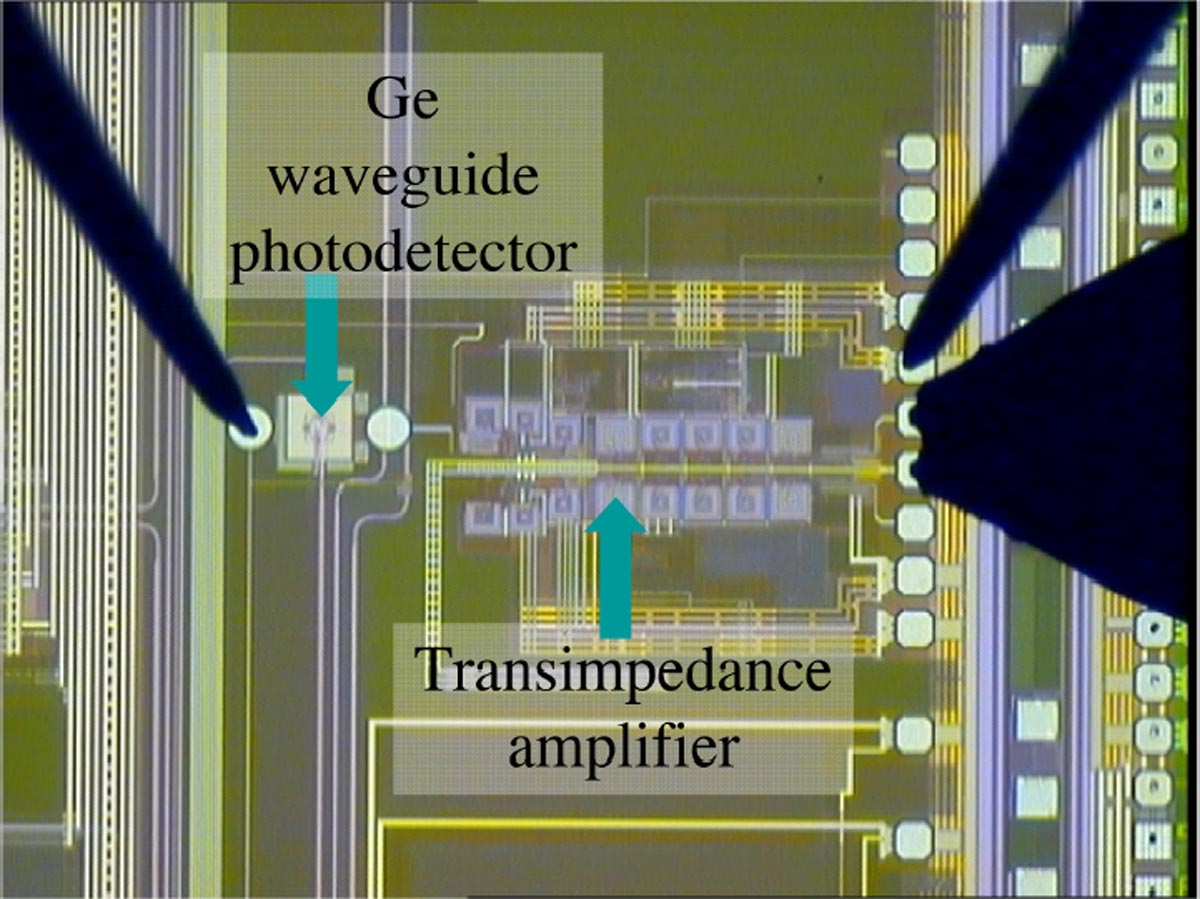 A fully integrated, four channel, high-speed monolithic receiver (4 by 10Gbs) has been demonstrated using this process. Figure 2 shows a top view of one of the four receiver channels, showing the waveguide photodetectors connected to feeding waveguides, the electronic amplifier, and the bonding pads.

Jeremy Witzens is currently a staff engineer at Luxtera Inc. He received his PhD from the California Institute of Technology in the field of nanotechnology and integrated optics, and his engineering diploma from the Ecole Polytechnique.