The key advances for lighting technologies in the 21st century are driven primarily by energy efficiency, color quality, and cost-effectiveness. The Journal of Photonics for Energy celebrates the International Year of Light.

The second section of The Role of Photonics in Energy examines how photonics is being used in the conservation of energy. The key advances for lighting technologies in the 21st century are driven primarily by energy efficiency, color quality, and cost-effectiveness.

Today, lighting accounts for approximately 22% of electricity energy consumption. Incandescent bulbs are limited by their relatively low-energy efficiency (approx. 4%) and efficacy (approx. 20 LuMens per Watt). The development of efficient blue light-emitting diodes (LEDs) has made bright and energy-saving white light sources possible. Coupled with yellow phosphor, LEDs based on the semiconductor indium gallium nitride (InGaN) offer white light emission with an efficacy of more than 300 Lm∕W. The need for a large-scale and cost-effective manufacturing process for GaN-based substrates remains the key issue for lowering the production cost of LEDs.

Organic light-emitting diodes (OLEDs) have been developed to the point of commercial applications in the last few years. In these LEDs, a film of organic compound emits light in response to an electric current. White OLEDs with efficiencies up to 100 Lm∕W and color rendering indices close to 90% have been demonstrated by companies such as LG Chemical and Konica Minolta.

One of the most revolutionary applications of LED and OLED technology has been the flat-panel display. LCDs were first widely used as computer monitors and have largely replaced plasma screens to become the dominant display technology. OLED dot matrix displays were first introduced by Motorola in 2000. In 2010, Samsung introduced active matrix OLED (AMOLED) displays in its Galaxy smart phones, and since then, AMOLEDs have become a mainstream display technology used in smart phones and tablets. 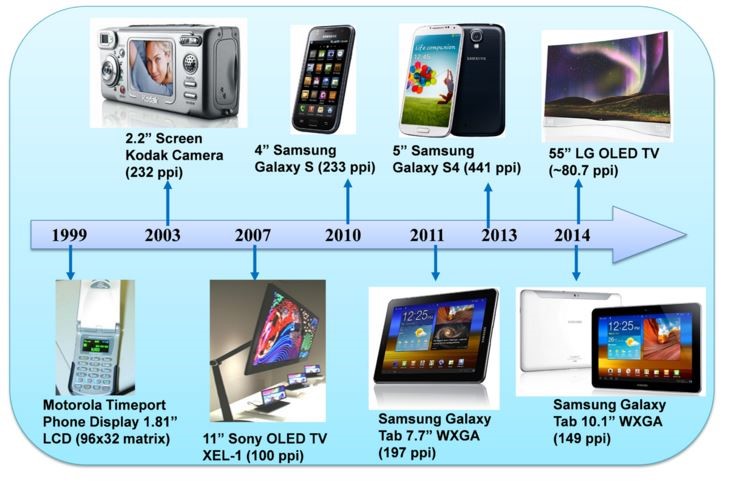 As the cost of OLED manufacturing continues to decline, OLEDs are envisioned to be the technology of the future for TV displays. While the first OLED TVs actually consume more power than their LCD counterparts, progress in the synthesis of stable phosphorescent blue emitters and in pixel design are expected to lead to OLED TVs with better overall power efficiency and superior performance.

Over the past 50 years, the rapid development of computers means that the vast majority of communication is in the form data (rather than voice), and the amounts of data are increasing dramatically as we progress from text to audio to video and on to cloud storage. Huge amounts of data are also communicated over short distances: between racks in data centers, between computers, between chips, and even within chips. It has been suggested that energy consumption for Internet traffic could reach 10% of the world's total consumption by 2018.

Optical fibers carry data over huge distances with very low loss (0.2 dB∕km), and are also a critical component in local Internet networks, with a significant amount of high-speed Internet data communications within buildings being run by Ethernet cables using optical fibers. Photonics has enabled long-distance communication at high data rates, and it has enabled it to occur with much lower power consumption than a purely electrical implementation.

The current growth of computing has brought with it huge data centers consisting of arrays of processors and storage devices. A major challenge in computer design is to dissipate the heat generated in the processors. Reducing energy consumption is not only important in itself, but is also necessary to achieve ever higher computer performance.

In the future, the authors of the paper suggest, optical communications will be used not just between cities but to connect boards in data centers and eventually to connect one silicon chip to another. Companies such as Luxtera, Avago, Neophotonics, and others involved in the manufacturing of silicon photonic chips used in such communication systems are developing advanced manufacturing technologies and novel integration/packaging schemes for moving light onto chips. We may be moving toward an integrated photonics technology base that will allow high-speed data communications at the chip level, board level, and beyond. Photonics is not just enabling the information age, but doing so in an energy-efficient way.