Ralph J. Cicerone, who served as president of the US National Academy of Sciences (NAS) from 1 July 2005 through June of this year, died 5 November at his home in New Jersey. He was 73.

Cicerone was a world-renowned atmospheric scientist whose research placed him at the forefront in shaping science and environmental policy, both nationally and internationally.

His accomplishments include the restoration and renovation of the historic NAS building on the National Mall, the creation of a $500 million Gulf Research Program following the Deepwater Horizon disaster, two visits to NAS by President Barak Obama, and a number of influential studies that helped to define the causes, extent, and effects of global climate change. 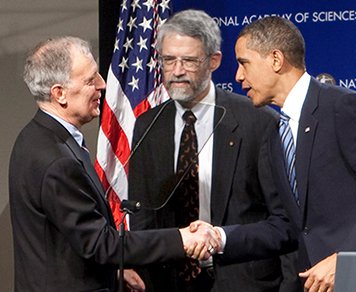 Ralph Cicerone (left) shaking hands with President Barack Obama. White House science adviser John Holdren is pictured in the center in this photo taken on 27 April 2009 during the president's visit to the National Academy of Sciences to address its annual meeting. Credit: White House photo

In 2001, he led a key NAS study about climate change requested by President George W. Bush. Ten years later, under Cicerone's leadership, a comprehensive set of reports titled America's Climate Choices were issued, calling for action on reducing greenhouse gas emissions while identifying strategies to help the nation and world adapt to a changing climate. Under Cicerone's guidance, the NAS and the Royal Society -- the science academy of the UK -- teamed up in 2014 to produce Climate Change: Evidence and Causes, a clearly written publication for policymakers, educators, and members of the general public.

"The entire scientific community is mourning the sudden and untimely loss of this great leader who has been unexpectedly removed from the forefront of the scientific issues that matter most to the future well-being of society," said Marcia McNutt, Cicerone's successor as president of the NAS. "Ralph Cicerone was a model for all of us of not only doing what counts, but doing it with honesty, integrity, and deep passion."