Multiple-telescope arrays can deliver spatial resolution typical of a large effective diameter, with a great deal of flexibility.1,2 However, such configurations can be awkward to model using conventional ray-tracing software. We have developed a method that takes advantage of the symmetries inherent in a modular design, combined with sequential routines, to evaluate wavefront performance for either a single telescope path or a multiple-aperture set-up, using the same optical model.

Traditionally, optical-design software has been structured assuming that the surfaces in an optical system are modeled sequentially (in the order met by the incoming beam). Rays are traced from the object and intersect with each surface in turn, and wavefront errors are computed as deviations from a reference sphere established by a chief ray. This method works fine for most optics. However, when the light is split into different paths and then recombined, there is no longer a single reference ray. Instead, the optical-path lengths associated with each path must be matched. 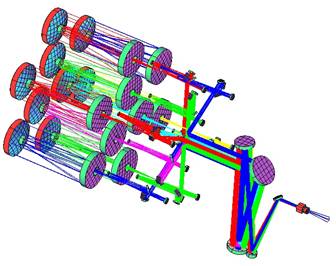 Non-sequential ray-trace methods are typically used when it is uncertain which surface a ray will hit next. The software checks every surface in the relevant part of the model to find the next ray intersection. This process is much slower than a sequential approach. Furthermore, modeling a multiple-telescope array non-sequentially makes it difficult to evaluate just a single aperture in the array.

Therefore, we devised a method to establish a common reference ray for all paths, which retains the speed of sequential ray tracing. We trace each path and compute the errors relative to a single, fixed reference ray. Next, we add the phase and amplitude maps onto arrays. From there, it is simple to compute a pupil function, point-spread function (PSF), and modulation-transfer function using Fourier methods. This approach can account for polarization and the effects of employing multiple wavelengths as well.

We designed the Star-9 multiple-aperture testbed to evaluate our ray-trace modeling approach. It operates by conveying beams from nine identical afocal collector telescopes by flats to a common imager (see Figure 1). All collector telescopes are very similar, except for position, so we model their surface locations in different zoom positions with a common entrance pupil large enough to encompass all telescopes. For any zoom position, the stop can be placed on a single telescope aperture, and that path can be evaluated separately. 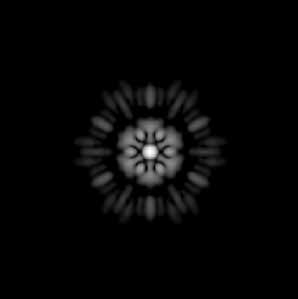 To compute a wavefront for the entire array, the program cycles through each zoom position and aims at filling the entrance pupil with a grid of rays. From the beams that make it through that path, the program computes a wavefront based on a fixed chief ray, and it adds the resulting phase and amplitude maps. Since these maps do not physically overlap, this is a straightforward process.

For multiple wavelengths, we repeat the process at each wavelength, and add the weighted PSFs. Figure 2 shows the results of this computation for an axial object point, displayed in a logarithmic gray scale for comparison to the PSF result from the Star-9 experiment, shown in Figure 3. The features in the computed PSF clearly correspond to those in the experimental data. 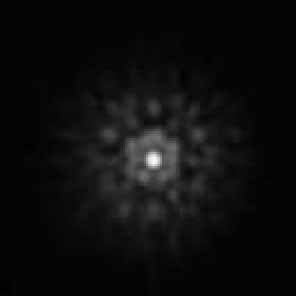 We have successfully implemented a flexible and efficient ray-trace approach for multiple-aperture telescopes and have shown that the computed PSFs agree with experimental results. Our ongoing investigation includes optical-design studies and testbeds with the goal of broadening the phased field of view and increasing the fill factor of multiple-aperture telescopes.3,4 We are also working to further advance ray-trace methods for large spherical primary telescopes.5

The Star-9 multiple-aperture telescope was designed by R. D. Sigler.

Alice Palmer was educated at San Jose State University and the University of Arizona. Her early work focused on injection-molded plastic optics. Since joining Lockheed Martin in 1985, she has performed optical analysis and design work at the Advanced Technology Center where she now leads the optical design and analysis group.

Torben B. Andersen received his PhD in astronomy from the University of Copenhagen (Denmark) in 1979. He joined Lockheed Martin in 1985, where he has been working on the development of optical-design and analysis software. He has published papers in astronomy and optics.