The low optical reflection from nanowire arrays could be exploited to improve the photon absorption efficiency of solar cells.
08 August 2008
Gang Chen and Lu Hu

The majority of solar photovoltaic modules sold are silicon-based, but in recent years increased demand for silicon solar cells has inflated the price of raw silicon materials. The shortage of high-quality silicon has lead to research to find novel ways to design photovoltaic cells using inexpensive, low-quality silicon alternatives. Photovoltaic cells based on silicon nanowire arrays have emerged as a promising candidate for solar energy harvesting.1,2 Silicon nanowire solar cells consist of arrays of radial p-n junction nanowires (see Figure 1) where the darker outer shell is composed of n-type silicon, to which the electron acceptor phosphorous has been added, and the lighter inner core from p-type silicon, to which the electron donor boron has been added. Each individual nanowire in the array has a p-n junction and acts as a tiny photovoltaic cell. 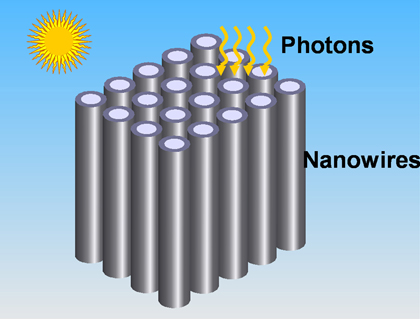 Figure 1. Diagram of the silicon nanowire solar cell. Each individual nanowire is a tiny p-n junction. The darker outer shell is n-type silicon. The lighter inner core is p-type silicon.

Nanowire arrays are expected to possess significantly different optical properties from their bulk-length counterparts because they are smaller than the wavelength of visible light. In our recent work,3 we performed numerical simulations to study optical absorption in silicon nanowire structures with a diameter between 50 and 80nm. Wave effects are taken into account by numerically solving the full-wave Maxwell's equations. Our study reveals the silicon nanowire structures have desirable anti-reflection characteristics across a broad spectrum. 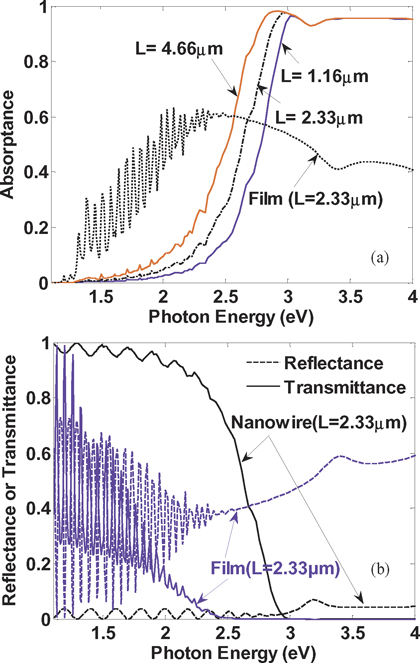 Figure 2. Radiative properties of nanowire structures of various thickness. L is the wire length. (a) Absorptance of nanowires with L = 1.16, 2.33, and 4.66μm (diameter =50nm, wire spacing =100nm). The absorptance of a thin film is included for reference. (b) Reflectance of nanowires and the thin film. (Adapted with permission, copyright American Chemical Society, 2007.3)

First, we investigated the effect of wire length on optical absorption. Figure 2(a) shows the optical absorbance of an array of silicon nanowires with a diameter of 50nm. Three wire lengths, 1.16, 2.33, and 4.66μm, are selected to show the thickness-dependent absorptance. The light is incident (falls upon) the top of the nanowire structure in the normal direction along the wire axis. The absorptance of a 2.33μm silicon film is plotted in the same figure as a reference. The graph shows that the optical absorption is limited in the low-frequency regime, particularly for shorter wires. Longer wires tend to compensate for insufficient light absorption in the low-energy regime, and as the frequency increases, the absorptance in the nanowires rises and reaches a plateau. Absorptance in the nanowires in the high-frequency regime is higher than that in the thin film compared to the low-frequency regime where absorption in the film is more efficient. 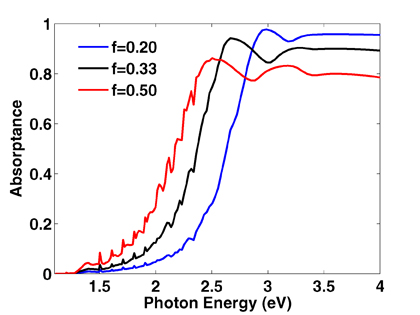 In summary, our analysis demonstrates that nanowire structures have the advantage of small reflectance across a wide spectrum and can be achieved without specially designed antireflection coatings. This small reflectance improves optical absorption significantly in the high-frequency regime, while in the low-frequency regime a similar improvement cannot be achieved because of the small extinction coefficient of silicon, which is the light lost to scattering and absorption. However, the less-optimal absorption in the low-frequency regime can be overcome by using longer wires or light trapping.

We would like to thank the US Department of Energy and the National Science Foundation for partial financial support.

Gang Chen is the Warren and Towneley Rohsenow Professor in the Department of Mechanical Engineering. His research interests include micro- and nanoscale heat transfer and energy conversion in thermoelectrics, photonics, and microelectronics, nanomechanical devices and microelectromechanical systems, and radiation and electromagnetic metamaterials.

Lu Hu is a PhD student. His work focuses on near-field thermal radiation for thermophotovoltaic applications and light absorption in photovoltaic cells.