SURE HOUSE wins at Solar Decathlon 2015

For two weeks, 8 - 19 October, collegiate teams of students from around the world gathered at the Orange County Great Park in Irvine, California to compete in the U.S. Department of Energy Solar Decathlon 2015. This biannual competition, sponsored by the U.S. Department of Energy (DOE) since 2002, challenges teams to design, build, and operate houses powered by solar energy that are affordable, energy efficient, attractive, and easy to live in.

"These inspiring collegiate teams show the world how energy-efficient building design and clean energy products available today can help families and businesses save money by saving energy," says Secretary of Energy Ernest Moniz. "The event provides student competitors with unique real-world training to become the clean energy workforce of the future and helps ensure that our nation remains competitive in the global race for clean energy."

SURE HOUSE is a sure thing 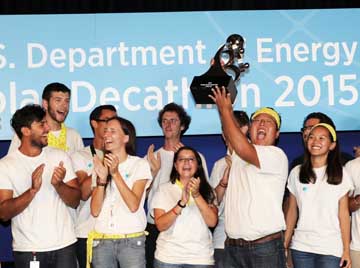 Inspired by Hurricane Sandy, which devastated coastal areas in the northeastern U.S. in 2012, SURE HOUSE is designed to not only survive heavy storms, but also to act as a community base by providing emergency power with its 9kW integrated solar power system that can operated independently if the power grid is shut down. The heat pump utilizes DC power from photovoltaic panels to heat water.

SURE HOUSE was built with fiber-composite materials that were repurposed from boat-building materials. The design includes bi-folding storm shutters, made with a composite foam core and wrapped with fiberglass, that shade the house in hot weather and provide a dense barrier against debris and water during heavy storms.

New to this year's Energy Solar Decathlon competition, was the additional requirement that all homes be able to power a hybrid, non-electric vehicle. Circle BMW in New Jersey provided the Stevens Institute of Technology team with a BMWi3 than can go 90 miles after being powered by SURE HOUSE.

"This project was about creating a real, livable residence for families in coastal communities who will be hardest hit by the effects of climate change," said A.J. Elliott, a graduate student in the Stevens Product Architecture and Engineering program and member of the SURE HOUSE team. "Our design provides a blueprint for the construction of homes that can endure extreme weather and epitomizes the principals of sustainable living." 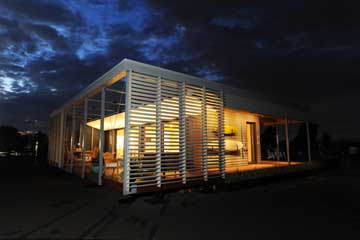 For the 2015 competition, the DOE selected student teams from five countries across two continents, including teams from universities in the United States, Germany, Honduras, Italy, and Panama. The contest is intended to raise public awareness and further the integration of energy-efficient technology into residential building practices.

During the 10-day event, the teams competed in 10 contests that measured each house's performance, livability, and affordability. Team members were required to complete everyday tasks, such as cooking, laundry and dishwashing, that tested the energy efficiency and livability of their houses. Winning teams blend affordability, consumer appeal and design excellence with optimal energy production and maximum efficiency.

The Solar Decathlon village was open to the public at certain times and thousands of visitors came to tour the innovative homes and learn how energy-saving features could help them save money and the environment.

At the final awards ceremony, Saturday 19 October, DOE Assistant Secretary for Energy Efficiency and Renewable Energy David Danielson congratulated all the teams on their accomplishments during the 2015 competition.

"On behalf of the U.S. Department of Energy, thank you to each inspiring student competitor," said Danielson. "Your hard work makes this unique competition possible. The homes you built demonstrate how affordable, renewable, and energy-saving products available today can cut energy bills, reduce pollution, and protect our climate. You have shown the skills and dedication necessary to advance renewable energy and energy efficiency throughout our economy in the decades to come."