Harper was welcomed by INO's CEO, Jean-Yves Roy, who thanked the government of Canada for its "continued and crucial support since INO was created in 1988. This is especially true of your government and your colleague Denis Lebel's ministry, which helped us reach a five-year, $45 million agreement in 2011 through the Economic Development Agency of Canada for the Regions of Québec." 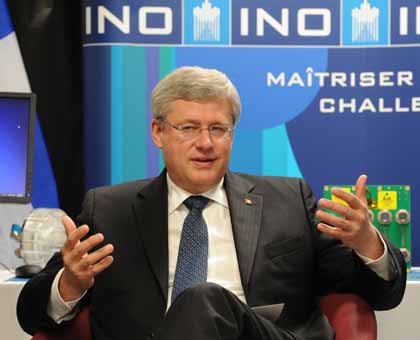 "It gives me great pleasure to mark the 25th anniversary of the National Optics Institute, which has become a mainstay of Canadian research in technological innovation and industrial development in the optics and photonics fields," said the Prime Minister. "We are proud to have partnered with this Canadian pioneer from day one, whose dynamism and commitment to the business community are continuing to create jobs for Québecers and Canadians and drive economic growth."

The mayor of Québec City, Régis Labeaume, was invited to speak and stated that the celebrations will highlight this regional economic powerhouse's success, and also provide the opportunity to look back and appreciate the Institute's progress since the mid-80s. "It was a turning point for Québec City, as this was when regional and government partners took up the challenge of diversifying regional economic development."

"Today it's easy to grow, but at the time it was a daring move. I remember that time and the decision-makers' hesitations. You can't talk about INO's success without mentioning the brilliant work of Jean-Guy Paquet, Larkin Kerwin, Jean-Yves Roy, and many others who contributed to this great triumph."

In 1985, INO was officially established at the urging of Université Laval and its rector, Jean-Guy Paquet. At the time, Université Laval alone trained half the country's optics/photonic researchers. But it wasn't until 1988, after much wrangling, that the Institute saw the light of day.

"INO is the result of a concerted and unprecedented effort by Université Laval, the towns of this region, economic development officers, and the highest levels of government," explained Jean-Guy Paquet, who is today Chairman of INO's Board of Directors.

CEO Jean-Yves Roy says INO is able to implement its national development plan now thanks to 25 years of successfully achieving its mission.

For three years, INO has had offices in Ontario and Western Canada. "With this expansion, we hope to cover industrial sectors specific to those regions. In Alberta, we're focusing on petro-energy, in British Columbia, green photonics, and in Ontario, the automotive and biomedical photonics industries," concluded Roy.

The National Optics Institute will soon be announcing the various activities that will mark its 25th anniversary. They will take place until the end of January with a view to acknowledging INO's financial and scientific partners, clients, staff, the Québec City business community, and the people of the region. The activities will culminate in a high-level Technology Symposium in January 2014.

A leading technology designer and developer, INO is the largest center for industrial optics and photonics expertise in Canada. It has performed 54 technology transfers and contributed to the creation of 29 new companies -- all still in business -- that employ over 1,000 people. INO has 200 employees representing 13 nationalities, more than 80% of whom are scientists involved in research.