A team of students from the Vienna University of Technology is the overall winner of the 2013 Solar Decathlon, sponsored by the U. S. Department of Energy.

The event is a showcase for solar technology and innovative energy-efficient design. Competing teams designed and built houses of under 1000 square feet over a two-year period. The structures were then shipped to the event site and reassembled. For eight days over two weekends in October, thousands of visitors toured the homes at the Orange County Great Park, on a runway of the former Marine Corps Air Station El Toro in Irvine, California. 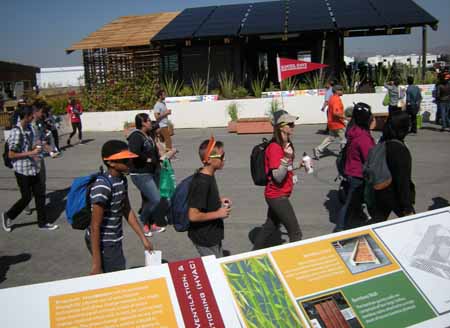 Student groups from around southern California toured the houses at the 2013 Solar Decathlon. In the background is the house of the team from Arizona State University and the University of New Mexico, named SHADE (Solar Homes Adapting for Desert Equilibrium).

The decathlon consists of judging in 10 categories ranging from efficiency in doing a load of laundry to more subjective areas like hosting and preparing a dinner for fellow competitors in their houses. Team Austria was made up of students from the Vienna University of Technology. Second place finisher overall was the University of Nevada Las Vegas, and Team Czech Republic, from the Czech Technical University, finished third.

The event, held outside of Washington, DC for the first time, took advantage of dependable southern California sunshine. For the first time, all 19 of the competitors' houses were able to produce more energy than they consumed. In addition, the point total separating the top finishers was smaller than it has been in past competitions -- less than seven points out of a possible 1000 separated the top three. Besides architectural and technical categories, each project was judged in areas including market appeal, affordability and communications.

The Austrian team finished third in the Engineering competition to clinch the win. Engineering winner was Team Ontario, and the Czech Republic team was second. Ontario's house featured a 7.8 kW photovoltaic array of 30 panels, as well as four solar thermal panels to meet its energy requirements. A predictive shading system used an algorithm to calculate optimal shading on the south-facing glazing every hour based on real-time weather data.

The People's Choice Award for the visitors' favorite house in the competition went to the University of North Carolina at Charlotte.

Since the first competition in 2002, the U.S. Department of Energy Solar Decathlon has provided unique training to approximately 17,000 students, preparing them to become the next generation of innovators and entrepreneurs in clean energy technology and efficient building design. The competition also shows consumers first-hand how to save money and energy with affordable clean energy products that are available today.