ICTP celebrates 50 years of helping scientists from the developing world

The Abdus Salam International Centre for Theoretical Physics (ICTP) hosted a four-day celebration from 6 to 9 October 2014 to celebrate its 50 years of success in international scientific cooperation and the promotion of scientific excellence in the developing world.

Dignitaries from science and government around the globe gathered for the celebration this week in Trieste, Italy, home of the ICTP. The program includes lectures from Nobel laureates and policymakers underscoring the importance of science for development.

On the opening day of the event, UNESCO Director-General Irina Bokova highlighted the importance of 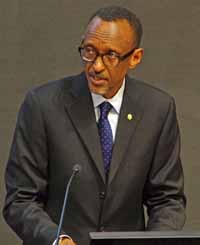 ICTP as a hub for scientific collaboration. "ICTP is the first global science research organization ever created," she said, adding, "It has demonstrated that it is a successful model to respond to the needs of scientists in the developing world and to build scientific capacity." Bokova said that ICTP's mission "resonates deeply with the mandate of UNESCO," adding, "This 50th anniversary is an opportunity to pay tribute to the ideals we share."

Rwandan President Paul Kagame (right) told the audience that ICTP enables scientists from Africa to return home and contribute. "Connecting our young people to the scientific mindset can help them be better citizens," he said.

Talks by several Nobel laureates were part of the program, including one by Steven Weinberg, who shared ICTP namesake Salam's 1979 Nobel Prize in Physics.

SPIE is a co-sponsor of the annual ICTP Winter College on Optics, along with the International Commission for Optics (ICO) and several other organizations. In addition, SPIE provides $30,000 annually to support an optics staff position at ICTP. In conjunction with ICTP, SPIE offers free SPIE Digital Library access in participating countries through the eJDS (eJournals Delivery Service) program.

Founded in 1964 by the late Nobel Laureate Abdus Salam, ICTP seeks to accomplish its mandate by providing scientists from developing countries with the continuing education and skills that they need to enjoy long and productive careers. ICTP has been a major force in stemming the scientific brain drain from the developing world.