“Starshades” for exoplanet detection and characterization

During the last decade, astronomers have inferred the presence of more than 260 planets orbiting nearby stars1 from the Doppler shifts and changes in star brightness. Attempts to image these planets have been foiled, however, by the small star-planet separations (<500 nanoradians) and overwhelming (1010 greater) brightness of the host stars. Imaging planets has been compared to trying to see a firefly next to the lamp of a lighthouse.

We have designed an occulter (an object that blocks the light of an object from an observer).2 Also known as a starshade, ours is the first design to provide the 1010 suppression needed to observe Earth-like exoplanets. In the past, several techniques have been proposed for suppressing this starlight, including coronagraphs and nulling inteferometers with complex optical systems. Spitzer3 first suggested the use of a space telescope and an external occulter to observe exo-planets in 1962. Several authors4,5 have since described occulters that could suppress starlight by a factor of 105 to 106.

Our starshade represents a breakthrough in suppression techniques. The simple disk with 8 to 16 opaque petals forms a hyper-Gaussian shape which gives the starshade an apodizing edge. This starshade shape produces a gradual transition from 0 to 100% transmission. An azimuthal summation of the fraction of opaque-to-transparent area conforms to the apodization function shown in Figure 1. The starshade is, in essence, a large Fresnel optical element that provides a deep, broadband null for on-axis light and high transmission for off-axis sources.6

Figure 2 shows the concept for our New Worlds Observer (NWO) mission designed to observe the planets around stars of spectral type A to M located within ∼100 light years (31 parsecs). For each observation, the starshade is maneuvered into the line of sight from the target star to a companion space telescope located in a halo orbit around the second Sun-Earth Lagrange point. With the star's light blocked by the starshade, the telescope has a clear view of any planets located beyond the edge of the starshade. The angular size of the region obscured by the starshade depends on the starshade's effective radius (a+b) and its distance from the telescope. The NWO's field of view will include the habitable zone where Earth-like conditions can be found.

Figure 1. Left: The hyper-Gaussian apodization function that defines the shape of the occulter provides a deep (10-10 to 10-12) null at the telescope aperture. Right: The transmission of the occulter for a=b=1 as a function of r for several values of n.

Figure 2. A conventional space telescope, stationed in the deep shadow cast by the NWO starshade, images the planets surrounding the target star by looking past the starshade's edge.

If we imagine a solar system exactly like our own, but located 10 parsecs from our Sun, the habitable zone would stretch from 70 to 150 milli-arcseconds (340–730 nanoradians). Since the starshade must be seven to eight times larger than the telescope aperture to provide adequate starlight suppression over the aperture (including an additional ± 1m margin for station keeping), a 4m telescope would require a 30m starshade at a distance of ∼45,000km to view the entire zone. In order to achieve the required suppression, the starshade petals must be deployed with an accuracy of a few millimeters. While the requirements for the starshade are challenging, they are within the current state of the art for large, precision deployable structures and currently available materials. Our attitude control system simulations indicate current technology can achieve the proper alignment and hold the shadow on the telescope for as long as necessary. 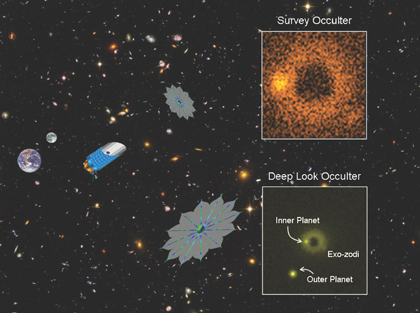 Our baseline architecture7 for the NWO is shown in Figure 3. A conventional 4m-class telescope with λ/15 quality optics will fly in formation with a 25m starshade with a separation of ∼30,000km, and a 50m starshade with a separation of ∼80,000km. Both occulters will have solar electric propulsion for retargeting, and chemical propulsion for station keeping. Optical navigation will be used by the starshade for coarse alignment with the telescope, and fine alignment and station keeping will be achieved with error signals transmitted from the telescope to the starshade. The small starshade will be used primarily to survey promising stars for signs of planetary systems. It will spend approximately 1 day per week on a target, and about 6 days moving to the next. The large occulter will be mainly used for planet characterization, spending 3–7 days on each target, and then 10–12 days moving to the next. The telescope will be equipped with imaging cameras and spectrometers covering the UV and optical spectral range. These will be used for general astrophysical observations for 50–70% of the time, while the occulters are moving to their next targets.

We look forward to images of planets forming from the debris disks around young stars, and of Earth-like planets emerging from the veil of interplanetary dust producing exo-zodiacal light. More exciting still, we await the chance to obtain the first spectrum of an exoplanet with biomarkers indicating the presence of life.

With over 28 years of systems engineering experience, Charles F. Lillie is the advanced systems project manager for many space observatories, including the Next Generation Space Telescope, Terrestrial Planet Finder, and Constellation-X. He is also a project scientist and project manager for the Advanced X-ray Astrophysics Observatory. Lillie was an associate professor of physics and astrophysics at the University of Colorado, and principal investigator and co-investigator for several NASA missions.

Amy Lo is a section head in the ISEC System Performance Department at NGST.

Ron Polidan is the chief architect in the Civil Space Division at NGST. Before joining Northrop Grumman, he was the chief technologist at NASA's Goddard Space Flight Center.

Jonathan Arenberg is currently the deputy for observatory systems engineering on the James Webb Space Telescope. He has been with Northrop Grumman for over 19 years and in the optical and laser engineering field for more than 25 years, with many patents and papers to his credit. He is a graduate of UCLA in physics (BS) and engineering (MS and PhD) and has worked in a wide variety of optical and space technologies.

Webster Cash is chair of the Department of Astrophysical and Planetary Sciences at the University of Colorado, Boulder.