The 2017 Nobel Prize in Physics has been awarded to three of the key scientists involved in the first direct observation of gravitational waves.

Rainer Weiss, a professor at the Massachusetts Institute of Technology, and Kip Thorne and Barry Barish, both of the California Institute of Technology, were the architects and leaders of LIGO, the Laser Interferometer Gravitational-wave Observatory, the instrument that detected the gravitational waves, and of a sister organization, the LIGO Scientific Collaboration.

The Nobel Prize recognizes the three for their "decisive contributions to the LIGO detector and the observation of gravitational waves." 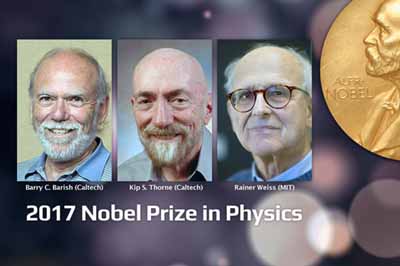 Gravitational waves are ripples in the fabric of space time arriving at Earth from a cataclysmic event in the distant universe. LIGO made headlines when they announced the first observation of a gravitational wave in September 2015. This confirmed a major prediction of Albert Einstein's 1915 general theory of relativity and opened an unprecedented new window to the cosmos.

LIGO detected a second gravitational wave in December, 2016, and a third in January, 2017.

"When we first discovered them back in September 2015, many of us didn't believe it," said Weiss, who called in to the Stockholm conference by phone. It took months for the scientists to convince themselves that the detectors found gravitational waves, Weiss added.

As two black holes collided more than a billion light-years away, they convered a mass equivalent to three suns into energy. The two LIGO detectors, located in Livingston, Louisiana and Hanford, Washington, caught the wave as it passed by the Earth. Registered as a spike in frequency, the tone became know as the "cosmic chirp." It took four decades of persistance to finally confirm Einstein's century-old predictions, but the two LIGO facilities in the US, along with Italy's Virgo interferometer, which recently detected a fouth gravitational wave along with the LIGO observatories, are now providing a completely new astronomical toolkit with which to observe the Universe.

"The detection of gravitational waves is truly a triumph of modern large-scale experimental physics," said Barry Barish. "LIGO is a prime example of what couldn't be done before. Although it was a very large-scale project, the challenges were very different from the way we build a bridge or carry out other large engineering projects. For LIGO, the challenge was and is how to develop and design advanced instrumentation on a large scale, even as the project evolves."

Kip Thorne, who admits he was initially skeptical about Weiss' interferometer designs, paid tribute to his co-laureates. "Barish, in my opinion, is the most brilliant leader of large science projects that physics has ever seen," Thorn said, adding that Weiss's efforts were ultimately a "tour de force." 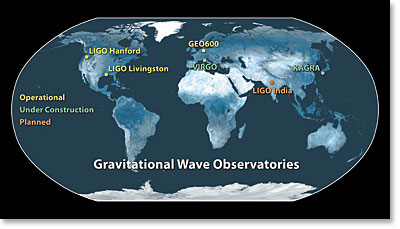 While this prize officially recognizes the work of just three scientists, the Nobel committee also acknowledged the team effort behind the LIGO and Virgo facilities, which includes approximately 1000 individuals from 20 different countries.

"This prize rewards not just Kip, Rai, and Barry, but also the large number of very smart and dedicated scientists and engineers who worked tirelessly over the past decades to make LIGO a reality," said David Reitze, executive director of LIGO.

The Royal Swedish Academy of Sciences, which awards the Nobel prizes, described the observation of gravitational waves as a "truly remarkable achievement," adding:

"Einstein was convinced it would never be possible to measure them. The LIGO project's achievement was using a pair of gigantic laser interferometers to measure a change thousands of times smaller than an atomic nucleus, as the gravitational wave passed the Earth."