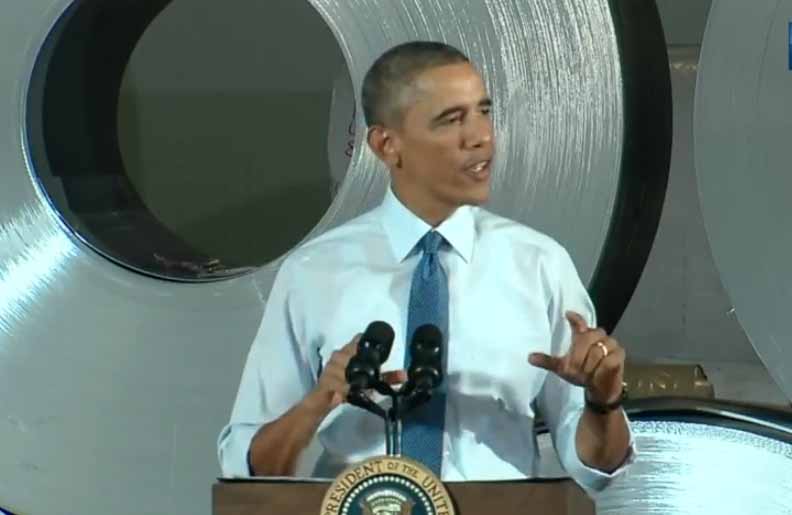 President Obama announcing manufacturing initiatives including the Integrated Photonics Manufacturing Institute, at a speech in Inidana on 3 October 2014.

SPIE leadership and researchers in photonics-related industries reacted enthusiastically to the news from the Obama Administration committing more than $200 million in public and private investment to create an Integrated Photonics Manufacturing Institute.

"This is great news and a statement of the importance of integrated photonics for the technology industry and for the U.S. economy overall. We're seeing interest in this technology for data centers, high-performance computing and communications and expect that other areas, such as biotechnology, sensors and imaging, will benefit as well," said Mario Paniccia, Intel Fellow and general manager of Intel's Silicon Photonics Solutions Group. Paniccia was named a Fellow of SPIE in 2010 for his pioneering silicon photonics work.

The institute will focus on developing an end-to-end photonics ‘ecosystem' in the US, including domestic foundry access, integrated design tools, automated packaging, assembly and test, and workforce development. Each manufacturing innovation institute serves as a regional hub, bridging the gap between applied research and product development by bringing together companies, universities and other academic and training institutions, and Federal agencies to co-invest in key technology areas that encourage investment and production in the U.S.

With more than $100 million each in public and private resources, the institute is expected to comprise the largest federal investment in manufacturing to date, reflecting the complexity of photonics technology, its importance to national security, and its revolutionary potential, according to a White House fact sheet. President Obama said in a speech that the creation of the new institute "speeds up the discovery process, and means we are moving from discovery to application a lot faster."

SPIE CEO Eugene Arthurs called the news "a very tangible recognition by the White House of the importance of photonics." Arthurs credited the work of the National Photonics Initiative (NPI), which has been working toward this type of recognition since it was formed following the 2012 National Academies report, "Optics and Photonics: Essential Technologies for our Nation." SPIE was a joint founder of the NPI with the OSA.

"We welcome the announcement about integrated photonics, a technology that is critical to fiber-optic communications from long distance to consumer domains," said Waguih Ishak, director of the Corning West Technology Center. "This initiative is essential to build the next-generation communications that will enable high-performance systems at lower cost." Ishak was a member of the  National Academies committee that wrote the "Harnessing Light" report.

"Integrated photonics technology already impacts our lives every second of the day, but ironically it is largely invisible," said Tom Baer, NPI Steering Committee chairman. Investments in electronics during the 20th century stimulated large industrial growth in the US. New investments in integrated photonics will accelerate the translation of basic science into products, sustaining economic growth of the US high-technology industrial sector in the 21st century."

The news of the institute's foundation was announced by the White House in conjunction with National Manufacturing Day. President Obama visited Indiana and was scheduled to deliver a speech announcing the effort. In order to continue strengthening American manufacturing, the President has called for investments that directly support innovations in manufacturing, like investments in research and development, but also investments in education and worker training that will continue to supply the necessary highly skilled workforce.

"'Essential technologies' summarizes the reality, and photonics has already changed the world, but there is so much more. A photonics manufacturing institute will help the US build from the extensive but dispersed national expertise," Arthurs said. "This step is due to the work of all the associations who helped coordinate a community voice to Congress and the Administration, and to the many from industry, academia and government laboratories who gave of their time to work on, and deliver the clear message, 'the future is photonic, action is needed for the US to participate.'"