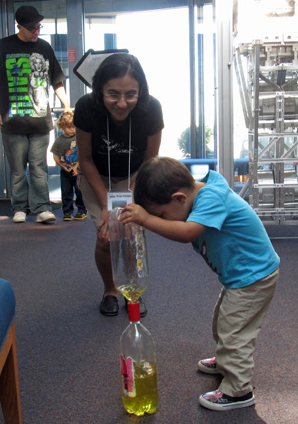 A youngster watches a whirlpool of his own making.

LIGO Hanford Observatory (LHO) near the Tri-Cities, WA hosted the "LIGO Light and Color Festival" on September 26, 2015. This was the last of LHO's International Year of Light series of four special events, which ran one per month between June and September 2015.

The Light and Color Festival drew roughly 175 community members to LHO's facility, including a number of families with young children. In addition to 20 permanently mounted interactive exhibits at the site, guests were able to sample another 20 tabletop light and color activities that utilized a variety of optical filters, prisms, lenses, laser pointers, color wheels and more. Walking tours of LIGO's facility occurred periodically throughout the afternoon. 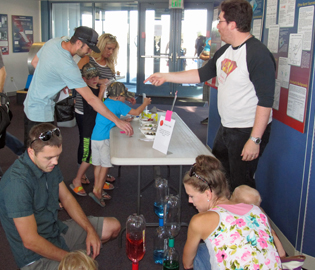 A family assembles take-home sets of small optical filters while
others explore the magic of tornado tubes.

LIGO's featured guest was Yakima Valley visual artist Andy Behrle. Andy's work explores the interplay of light, sound and human perception. On September 26 in LIGO's auditorium, he passed a beam of light through water and projected the exiting beam on a large inflated weather balloon, He also displayed video representations of a number of other works, and conducted a question and answer session at the close of his talk that provided young people in the audience with a chance to query him about arts, science and the intersections between them. 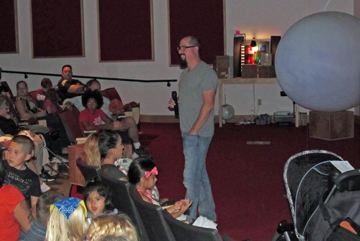 SPIE provided another event highlight by donating several copies of the book "Celebrating Light," which LIGO gave away to guests via a raffle. Copies of the book made a nice exclamation mark for the 20 families who received them.

On 18 September, the first official 'observing run' of LIGO's advanced detectors in Hanford, WA and Livingston, LA quietly began at 8 am Pacific Time. While this date marked the official start of data collection, both interferometers have been operating in engineering mode collecting data for some weeks already as technicians, scientists, and engineers worked to refine the instrument to prepare it for official data-collection duties. What IS different about today is the scope of the search for gravitational waves. Now, the broader astronomical community has been added to the team. From now on, LIGO will be able to notify any number of 75 astronomical observatories around the world who have agreed to, at a moment's notice, point their telescopes to the sky in search of light signals corresponding to possible gravitational wave detections.

LIGO's detectors are searching for gravitational waves emanating from the depths of space. Gravitational waves are the evanescent vibrations of space-time generated by some of the most violent explosions and events occurring in the Universe; events like supernovae (exploding stars) and the collision and merger of black holes and neutron stars (the remnants of massive stars after their thermonuclear deaths).

LIGO is funded by the National Science Foundation and is operated by Caltech and MIT.