In optical fiber communications, dispersion compensation is essential for transmitting data at high speeds over long distances. Pulses representing digital data spread as they propagate through optical fibers because of chromatic dispersion: that is, different spectral components (colors) travel at different speeds. As the distance increases, the pulse width broadens, and eventually the individual pulses, or data bits, cannot be distinguished. This effect becomes more severe as the transmission speed increases. For example, a 10Gb/s signal can be sent over 80km in standard optical fibers without dispersion compensation, but at a data rate of 40Gb/s, this distance decreases to less than 5km.

Various techniques to counter this problem have been developed. One of the most successful and widely deployed uses dispersion compensating fibers (DCFs) and is appropriate for standard optical fibers. DCFs typically have much higher loss than the standard medium, and therefore require additional amplifiers. Depending on the transmission distance, multiple dispersion compensation modules (DCMs) consisting of DCFs and amplifiers may be used in fiber links. The overall cost associated with this approach scales with the link distance.

Another promising technique that could offer a cost-effective alternative to DCFs for long-distance optical communication is mid-span spectral inversion (MSSI).1 Instead of employing dispersion-compensating materials, the method manipulates the signal itself. When an optical signal's spectrum is inverted in the middle of the transmission link, the spectral components that travel slower in the first half-span will become faster in the second half-span and vice versa. The net result is that the pulse spread is reversed and the dispersion effect is canceled out. The MSSI technique is independent of the transmission fiber's dispersion properties as long as the same type of fiber is used for both halves of the link. The beauty of this approach is that only one spectral inverter device is required at the midpoint of the link, independent of its distance.

The inverter is a nonlinear optical device that mixes the input signal at carrier frequency ν1 and a pump at ν0 to generate a new or converted signal at ν2, where energy conservation requires ν2= 2 ν0−ν1. The intensity of the converted signal is proportional to the input signal, so the same optical data is carried, but the data spectrum is inverted (note the opposite signs of ν1 and ν2).

MSSI has been demonstrated effectively using four-wave mixing (FWM) in semiconductor optical amplifiers (SOAs)2 and difference-frequency generation in periodically poled lithium niobate (PPLN) waveguides.1 The advantage of SOAs is that they require low pump power to generate efficient optical conversion. Their major drawback is that the conversion bandwidth is narrow: when used in dense wavelength division multiplexing (DWDM) systems, strong channel cross talk occurs due to cross-phase and cross-gain modulations. PPLN, on the other hand, has much wider conversion bandwidth, and multichannel dispersion compensation has been successfully demonstrated.1 The major concern here is deterioration in device reliability due to photorefractive damage. In addition, stringent phase-matching conditions require the pump to be set to a predetermined wavelength to achieve efficient conversion.

In recent years, various silicon-based photonics building blocks have been developed for communication and interconnect applications.3 In particular, due to the high nonlinearity and strong light confinement in silicon waveguides, low-cost and compact nonlinear optical devices can be realized on silicon chips. Efficient wavelength conversion and spectral inversion have been obtained for mid-span dispersion compensation.4,5 The advantages of silicon-based MSSI include low materials and fabrication costs, high reliability, room temperature operation, efficient conversion, and simultaneous compensation for multiple DWDM channels with low channel cross talk.

The schematic for the multichannel mid-span dispersion compensation experiment is shown in Figure 1. Four laser transmitters on International Telecommunication Union channels 33–36 are multiplexed and modulated using a Mach–Zehnder modulator. The signals propagate through 160km of standard single-mode fiber (SSMF) and through a band-selective filter (BSF) that removes out-of-band noises. The multiplexed signals are then combined with a pump laser and coupled into the silicon waveguide. The pump laser's wavelength is set between channels 31 and 32. The converted signals are generated in the silicon waveguide at channels 27–30 via FWM. These signals, carrying the same data as the input signal but with an inverted spectrum, are isolated from the original signals and the pump using another BSF. They propagate through the second half of the 320km span, that is, another 160km fiber. Band-pass filters (BPFs) are used to isolate each of the channels, and the signals are characterized using a digital communication analyzer and a bit error rate (BER) tester.

The BER is a quantitative measure of signal quality. Figure 2 shows the results, plotted with dashed lines, for each of the four channels (27–30) after transmission over 320km. The solid line represents the BER for one of the original signals at the transmitter and serves as a baseline to determine the power penalty (an increase in signal power to obtain the same BER) of the transmitted signals at the receiver. The power penalty for all four channels is within the measurement uncertainty of about 0.3dB for BER >10−9. The lower left inset shows the eye diagrams, providing a visual representation of the digital data, for the four input channels. The upper right inset shows the eye diagrams for the signals after propagation through 320km. No significant signal degradation is observed before or after transmission. For comparison, the lower right inset shows how dispersion affects a signal after uncompensated transmission through only 160km of SSMF. 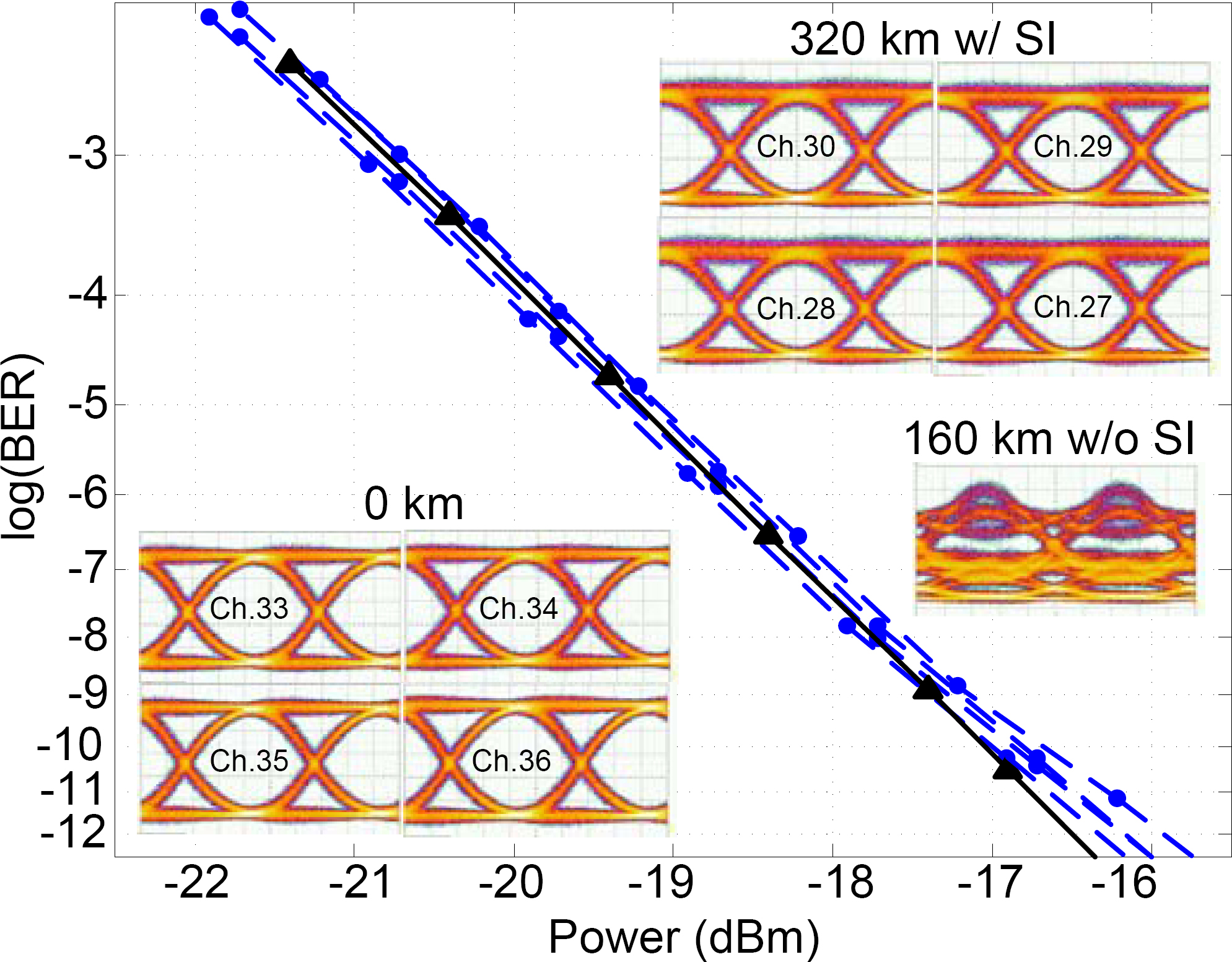 Figure 2. Bit error rate (BER) curves and eye diagrams for four multiplexed signals transmitted through a 320km fiber using a silicon spectral inverter (SI), and for comparison, the eye diagram for a signal transmitted without an SI.

We have experimentally demonstrated dispersion compensation using silicon-based MSSI for simultaneous transmission of four DWDM channels at 10Gb/s over 320km of standard fiber. Incorporating a mode converter structure into the silicon waveguide to reduce the mode mismatch between fiber and waveguide would allow much smaller structures and lower pump power to achieve sufficient spectral inversion. Properly choosing the waveguide cross-sectional dimensions to obtain better phase matching results in wider bandwidth. With these improvements, silicon-based MSSI could be used to efficiently compensate for dispersion for multiple DWDM channels simultaneously over the whole C-band with a single device. We believe this technique could provide a viable low-cost alternative to current dispersion compensation techniques.