For decades, researchers worldwide have been striving to build an efficient, robust and cost-effective process for splitting water to hydrogen and oxygen. Photocatalytic and photoelectrochemical water splitting, based on semiconductors, has attracted widespread interest thanks to its huge potential to cleanly produce hydrogen using sunlight.

But developing a process that efficiently uses visible light to produce hydrogen and oxygen isn't easy. The industry target for overall solar-to-hydrogen conversion efficiency is set at 10% to ensure the technology is competitive with alternative hydrogen production systems. Some laboratory systems have reached this goal, but an industry-ready, robust device that does the same has yet to be seen.

What's more, the photocatalysts and photoelectrodes necessary to drive the water-splitting reactions degrade in water and sunlight, leaving researchers racing to develop effective surface treatments. And of course, production costs must compete with today's cheap fossil-fuel generation, not just in the laboratory, but at commmercial scale.

However, in recent years progress has been rapid, as more and more researchers focus on developing semiconductors with novel nanostructures that promote water splitting reactions and protect devices against corrosion. From nanorod iron-oxide photoelectrocatalysts to nanoporous gallium nitride photoelectrodes, the very latest research was presented at the recent SPIE conference Solar Hydrogen and Nanotechnology IX, held in August at SPIE Optics + Photonics in San Diego. Conference chair Gunnar Westin (Uppsala Univ., Sweden) says this is an exciting time for solar hydrogen development.

"In many fields, it takes a long time before we see a jump in the performance of materials, but in solar hydrogen research, many avenues are quickly advancing at the same time."

As he points out, fabricating stable and efficient photocatalysts and photoelectrodes is crucial to the success of water splitting, and the very latest nanowires based on hematite (iron oxide) look promising. These materials have shown significant efficiency improvements in the visible region of the solar spectrum, and crucially, are cheap, stable and non-toxic.

Presenting at the SPIE conference, Lionel Vayssieres from Xi'an Jiaotong University, China, has pioneered the development of low-cost methods to fabricate quantum-confined nanostructures for hematite photoelectrodes. His nanostructures consist of quantum dots and quantum rods with electronic properties tailored for efficient water splitting.

At the same time, Kazunari Domen (Univ. of Tokyo) and colleagues have claimed record-breaking photocurrents with their hematite photoanodes, fabricated using modified versions of Vayssieres' methods. The team added platinum and a co-catalyst to hematite nanorods to drive charge transfer and photocatalytic reactions. 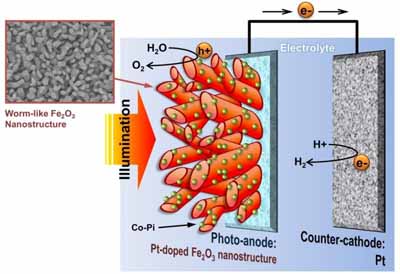 Several other research teams have been striving to improve hematite's catalytic efficiency by doping the oxide with a range of ions from titanium and manganese to nickel and fluorine. Recent research from chemists at Princeton University has indicated that nickel-doping improves overall reactivity. Fundamental studies on this from Bruce Koel and colleagues from Chemical and Biological Engineering, also presented at SPIE, are driving research forward.

Meanwhile, Sanjay Mathur (Univ. of Cologne) and colleagues have been adding fluorine ions to hematite nanostructures as part of a European Union project, Solarogenix. According to Mathur, these novel photoactive nanomaterials make very efficient water-oxidation catalysts.

Westin himself has been developing low-cost, solution-based preparation processes for nanostructured coatings, including hematite, doped hematite, and even calcium titanite, or perovskite, films. At the same time, he has also developed films consisting of alumina and nickel oxide nanoparticles in a ceramic matrix that can be applied to zinc oxide and titanium oxide, widely used photoelectrode materials.

"We don't have to produce just nanowires. I've been experimenting with coatings using solution chemistry, which is very efficient and can easily scale up," Westin explains.

"These direct and simple processing routes allow for large-scale technological exploitation without the use of the complex vacuum equipment needed for physical and chemical vapor deposition," he adds.

But it's not all about oxides. Metal-oxide semiconductors may be stable and plentiful, but solar-to-hydrogen efficiencies have, to date, been limited to around 5% for several reasons. For example, the wide bandgap of these semiconductors is too large to absorb visible light, and the optoelectronic quality of the materials can be poor.

However, more exotic III-V semiconductors offer an alternative route to efficient solar water splitting. For example, the National Renewable Energy Laboratory, US, has been developing so-called tandem semiconductor photoelectrochemical electrodes based on gallium indium phosphide and gallium arsenide materials systems. These have achieved solar-to-hydrogen efficiencies of more than 10%.

But as NREL's Heli Wang highlighted at the recent SPIE conference, materials stability in the electrolyte has plagued progress. To this end, he and colleagues at NREL and the US Department of Energy Photoelectrochemical Working Group have been investigating the effectiveness of various surface modification methods, including coatings, ion bombardment, surface nitridation and electrolyte treatment, designed to boost electrode lifetimes.

Results reveal that while untreated electrodes degraded severely after just 24 hours under water-splitting conditions, the best-performing of the modified electrodes lasted at least one hundred hours longer. But as Wang highlights, lifetimes should be closer to several thousands of hours, and overall production costs need to be cut.

And so, the researchers now intend to investigate additional III-V materials and configurations. With these they hope to achieve solar-to-hydrogen efficiencies beyond 20%.

Tao Wang, from Sheffield University (United Kingdom), presented his latest research into nanoporous GaN for enhanced solar hydrogen production at the recent SPIE conference. He has been fabricating GaN and InGaN/GaN nanorod arrays -- with nanopores -- for use as photoelectrodes.

According to Wang, these nanoporous structures have higher photocurrents and generate more hydrogen than standard GaN-based devices. And critically, his team has also deposited extra nickel oxide nanoparticles onto the photoelectrodes to boost device performances further and increase resistance to corrosion from the electrolyte.

As Wang highlights, the device is very efficient at converting incident photons to charge carriers - he believes at 45% he has set a record for InGaN devices -- which bodes well for overall solar-to-hydrogen conversion efficiencies, yet to be measured. But as he adds: "While GaN is stable and lasts longer, reducing [long-term] costs, our major challenge is cost. Still, if we sort this out, then I don't think there is any other barrier to commercialization."

Taking a different tack, researchers led by Zetian Mi from McGill University (Canada) have been doping GaN-nanowire photocatalysts and photoelectrodes with magnesium to tune surface-charge properties and water-splitting efficiencies. As Mi explains, magnesium doping promotes water-splitting reactions and also increases device stability. His team is now looking to modify the surface-charge properites of InGaN nanowires for even higher efficiency and stable water splitting.

As demonstrated at the recent SPIE conference, breakthroughs in hydrogen solar generation are coming in thick and fast. As efficiencies rise and costs drop, the very latest research is set to bring vast economic and environmental benefits to a future hydrogen economy. But when?

From device stability to hydrogen production costs and scalability, many barriers to commercial-scale generation remain. As Gunnar Westin puts it: "Photocorrosion and corrosion in general is a huge challenge but we are getting better results every year."

Westin believes researchers must now combine good measurements with the best materials to really drive progress. But as he adds: "Being competitive [with fossil fuels] on a large-scale also depends on, for example, government grants; like solar cells, society has to subsidize this. Still I don't think we are so far away, no more than five to ten years."

Rebecca Pool is a freelance writer based in the United Kingdom.