Nanometer-sized gold particles interacting with electromagnetic fields, fluids, and biological objects can be visualized using a specialized imaging technique combined with dark field microscopy.
04 July 2007
Ivan Fedosov, Igor Nefedov, Boris Khlebtsov, and Valery Tuchin
The pressure of electromagnetic waves, experimentally discovered in the early twentieth century,1 produces forces that affect objects scattering or absorbing light. With ordinary light sources these forces are feeble indeed and were considered unimportant before the invention of lasers in the 1960s. In the early 1970s, Arthur Ashkin demonstrated that a focused laser beam provides light pressure sufficient to displace and even levitate microscopic objects.2 This work eventually led to the development of ‘optical tweezers’3 employed for motion control of microscopic objects in physics, chemistry, and biology.4 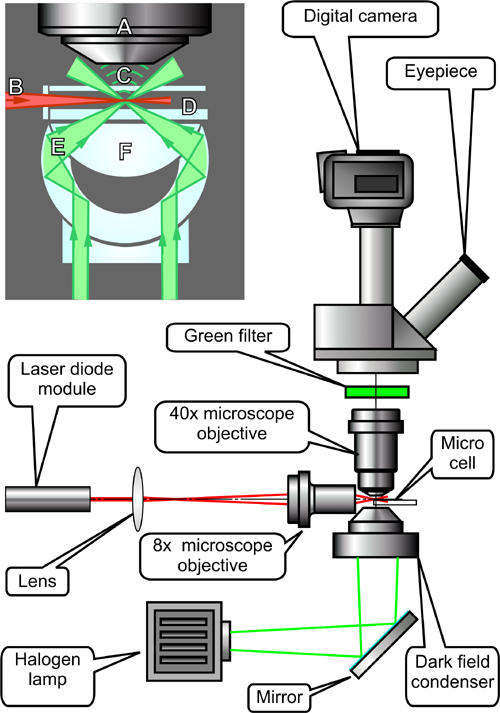 Although the possibility of optically trapping gold nanoparticles was demonstrated in 1994,6 developing tweezers for nanoparticles is not straightforward. The gradient forces that are responsible for trapping, fall off with particle size. Moreover, the non-negligible absorption by particles leads to a dramatic temperature rise at high power, destablizing single beam optical traps.7 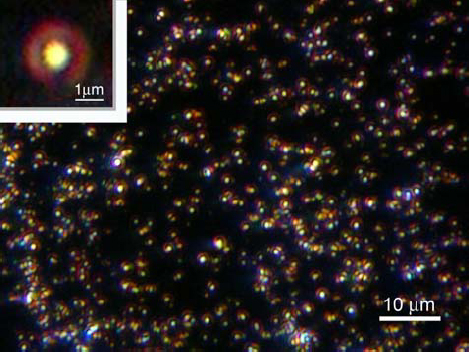 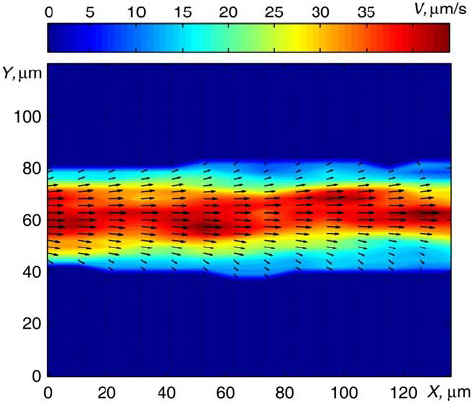 To observe the translation of nanoparticles along the laser beam, we designed experiments based upon the conventional upright microscope (see Figure 1). The optical system consisted of an 8× objective and additional lens to deliver the radiation of a 75mW red (λ=660nm) laser diode to the object plane of the microscope perpendicular to the viewing direction. To make the nanoparticles visible, we used a dark field condenser (see Figure 1, inset). Only light scattered by nanoparticles reached the objective and formed the particle image as diffraction-limited spots (see Figure 2). In our setup with a 40× (numerical aperture 0.65) objective, a 40nm nanosphere, due to diffraction, appears through the microscope as a 1.5μm diameter circle on the object plane (see Figure 2, inset).The local velocity distribution of particles moving under light pressure in the laser beam focused along a 20μm diameter waist is shown in Figure 3. The flow induced by moving particles makes water circulate at the beam periphery and, as conveyed by the image, the nanoparticles tend to move away from the beam.

The use of PIV in combination with laser beams offers a novel approach for the study of nanoparticle interaction with electromagnetic fields, fluids, and biological objects such as cells and microorganisms. One current application of the proposed technique is the study of nanoparticle delivery and nanocluster formation for optical imaging in cancer diagnostics and therapy.9