Organic light-emitting devices (OLEDs) are becoming an important next-generation display technology due to advantages including rapid response and vivid color. Both conventional bottom-emitting and top-emitting OLEDs are usually composed of a reflective back electrode, organic layers, and a semi-transparent electrode through which light exits.1,2 OLEDs reflect ambient light off their back electrode. Such reflection seriously degrades the contrast of an OLED display when it is used outdoors or under bright lights, and thus the sharpness and colors of displayed images.

Polarizers or filter films laminated on the surface of the display panel can reduce reflection of ambient illumination.3 Using such contrast-enhancement films, however, substantially reduces the power efficiency of the displays (to below ∼40% of the device efficiency). The films also add complexity to a display's design and add to the cost of fabrication. We would like to make OLED structures that offer low-ambient-light reflection yet retain as much emission as possible. This would allow use to enhance the display contrast with less impact on cost and efficiency.

A few high-contrast OLED structures have been reported that reduce ambient-light reflection and thus the contrast ratio of OLED displays.3–6 However, these all deal with bottom-emitting OLEDs and may not be readily adapted for those that emit from the top. (Top-emitters have some technical advantages, such as larger aperture ratios, over bottom-emitting devices for high-performance active-matrix OLED displays.) Furthermore, these previous structures all required the insertion of extra layers into the active region of devices (i.e., between the anode and the cathode). Thus one must be concerned about the layers’ optical as well as electrical characteristics such as carrier injection and transport. Recently, we reported a high-contrast OLED structure that exploits the optical characteristics of the electrodes and anti-reflection coatings deposited outside the active region of devices alone, thus reducing the impact on electrical characteristics and device complexity (see Figure 1).7 We have implemented this structure in top-emitting OLEDs. The devices produced offer better efficiency than conventional OLEDs laminated with polarizers, and are compatible with active-matrix backplanes (i.e., the thin-film transistor driving circuits). We also demonstrated active-matrix OLED (AMOLED) displays that incorporate these high-contrast top-emitting OLEDs and thus have improved readability in brightly lit environments. 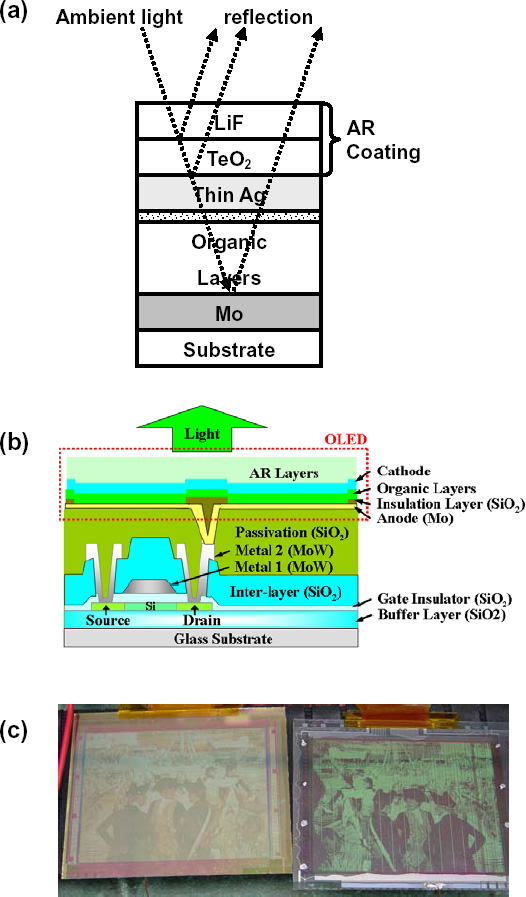 With all previous contrast-enhancement approaches, incident photons have been simply absorbed and wasted. Moreover, a significant portion of the internal OLED emission fails to escape the device and is also wasted. This wasted energy can be recycled by placing a solar cell in the back of an OLED (see Figure 2) that can both reduce the reflection and provide useful electrical power. The portion of internal OLED emission that cannot emerge is also absorbed by the solar cell and converted. This feature is attractive for mobile electronics, which are typically limited by power usage considerations. With such energy recycling, the devices themselves would add a self-powering function as well as achieve higher system-level efficiency. Both attributes could contribute to longer battery lifetimes for mobile electronics. 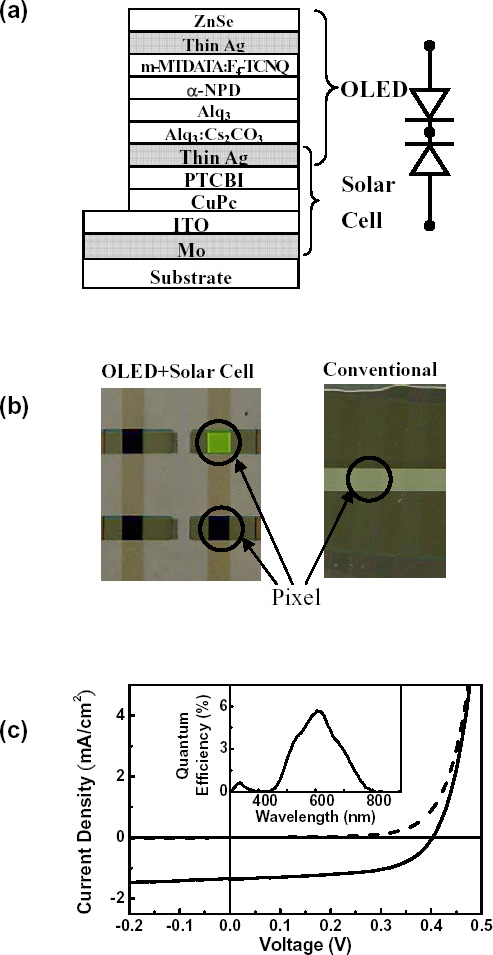 Figure 2. (a) Structure of a stack that incorporates an OLED and a solar cell. (b) Photos of the OLED and solar-cell stack and a conventional bottom-emitting OLED. (c) Current-versus-voltage characteristics of the solar cell in dark and under air mass (AM) 1.5 illumination. The inset of (c) shows the spectral response of the solar cell under external illumination.

Recently, we reported integrating OLEDs and solar cells. The resulting structure not only exhibits a contrast superior to the conventional polarizer approach but also is capable of recycling both incident ambient illumination and internally-generated OLED emission (see Figure 3).8 Luminous ambient-light reflection as low as ∼1% (superior to that achieved with polarizers) can be achieved without compromising the electroluminescent efficiency for high-contrast display applications. By inserting the solar cell between the driving low-temperature polycrystalline-Si (LTPS) thin-film transistor and the pixel OLED, we also demonstrate the energy-recycling pixel structure for AMOLED displays (see Figure 3).9 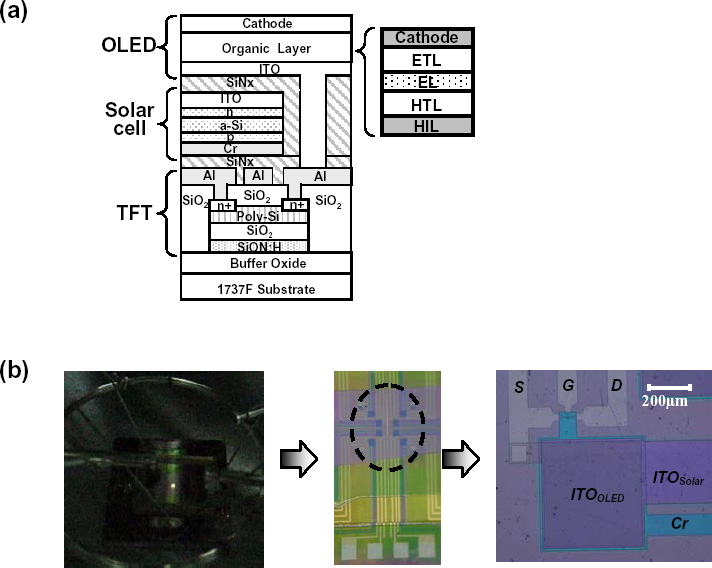 Figure 3. (a) The schematic diagram showing the structure of the implemented integration of a poly-Si thin-film transistor (TFT), an amorphous-Si:H p-i-n solar cell, and a top-emitting OLED; (b) (left) a photo showing the fabricated sample under testing, in which the small bright spot is emission of the OLED driven by the TFT; (center) a closer view of the pixel area and the layout; (right) an optical micrograph of one complete pixel. ITO: indium tin oxide.

In summary, careful design of the optical structures and integration of solar cells allow us to construct OLEDs for high-performance display applications. These are high-contrast high-aperture-ratio energy-recycling self-powering devices that are compatible with active-matrix backplanes.

Chung-Chih Wu received his PhD in electrical engineering from Princeton University. He is currently a full professor of Electrical Engineering at the Graduate Institute of Electro-optical Engineering, and the Graduate Institute of Electronics Engineering at National Taiwan University. His research interests include organic semiconductors for optoelectronic and electronic devices, displays, and lighting technologies. He has served on committees for conferences including the International Display Manufacturing Conference (IMDC), the Conference on Lasers and Electro-Optics (CLEO), as well as the annual meetings of the IEEE Lasers and Electro-Optics Society (LEOS), the Society for Information Display (SID), and the Optical Society of America (OSA).