One way to increase the data rate of a communications system is to use multi-antenna arrays at both transmitter and receiver. Such methods, known as MIMO (multiple input–multiple output), enable different bitstreams sent from the transmitting array to be decoded at the receiving end, provided the medium creates sufficient scattering.1 It is commonly thought that spacing between the receiving antennas must be larger than λ/2 because the diffraction limit prevents two antennas from resolving two independent bitstreams if they are less than a half−wavelength apart. With these two conditions fulfilled, the global maximum error−free data rate, or ‘Shannon capacity,’ is multiplied by the number of transmitting antennas.

However, from a practical perspective, a large number of antennas make the λ/2−spacing requirement difficult to satisfy. This situation typically arises with antennas in laptops and telecommunications wavelengths on the centimeter scale (e.g., Bluetooth or Wi−Fi).

We propose a solution to overcome the diffraction limit and thus increase the number of receiving antennas that can be set out in a small region of space. Our approach relies on a MIMO communications scheme using an eight−antenna time−reversal mirror (TRM)2 as the transmitter and an eight−microstructured antenna array as the receiver (Figure 1). Both transmitter and receiver arrays operate at 2.45GHz (λ=12cm) with a 150MHz bandwidth. The distance between two adjacent receiving antennas is λ/30. 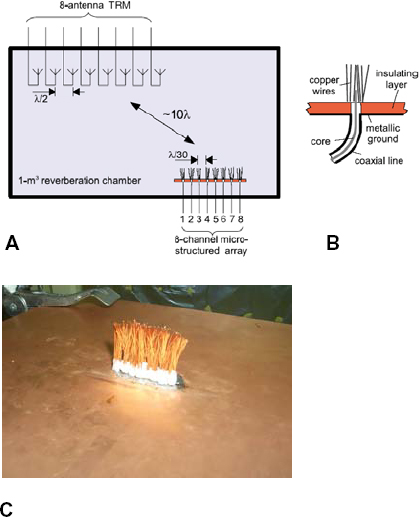 Figure 1. Experimental setup. (A) A time-reversal mirror comprised of eight commercial dipolar antennas and a subwavelength receiving array consisting of eight microstructured antennas are housed within a 1m3 reverberating chamber. (B) Details of one antenna show the core of a coaxial line extruding 2mm from an insulating layer, and a microstructure consisting of a random distribution of thin copper wires. (C) Eight-element subwavelength array surrounded by copper wires. 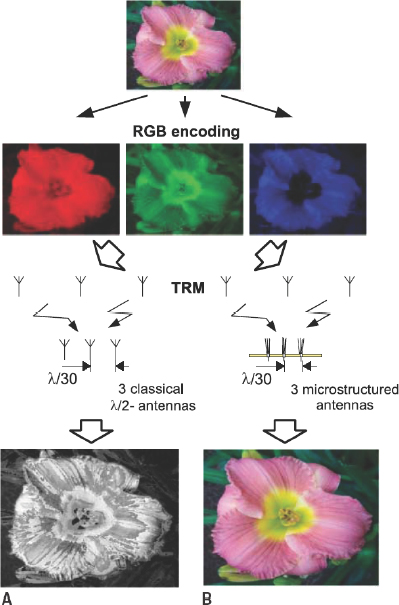 Figure 2. Transmission of a color image between a three-antenna TRM and a three-antenna receiving array. The original image is encoded on three RGB channels, and the corresponding bitstreams are sent from the antennae of the TRM. With a classical receiving array, the image is grey after decoding (A) because the three antennas coding for the red, green, and blue channels receive the same signal. With a microstructured receiving array, the red, green, and blue signals are focused independently on the three receiving antennas, despite the latter being only λ/30 from each other. Relative weights between the RGB channels are thus preserved and the color image is restored (B).

In our procedure, the TRM is used as follows. One antenna in the receiving array transmits a 10ns microwave training pulse that propagates in a chamber where it undergoes strong reverberation (Figure 1A). The resulting signals are recorded at each antenna of the TRM, flipped in time, and used to precode the transmitted symbols. When the resulting sequences are sent back by the TRM, the time-reversed wave retraces its former paths and focuses the message in space and time at the intended receiver. This reversal compensates for the reverberation caused by the channel and takes advantage of the multipaths to increase signal strength at the receiver and improve spatial focusing.3,4 If the receiver is a classical dipolar antenna, the message is optimally focused on it with a half-wavelength focal spot size.

However, instead of using a classical receiver array, we built a microstructured array, placing a random distribution of sub-wavelength scatterers in the near field of eight wire-antennas, as shown in Figure 1(B) and (C).5 By diffracting off these scatterers, evanescent waves that carry sub-wavelength information about the receiving antennas can be converted into propagating waves detectable by the far-field TRM. Time-reversed, they are transmitted back. In accord with the associated theorem of generalized reciprocity,6 the part of the far-field time-reversed wave originating as evanescent waves at the source is reconverted into the initial evanescent components that, as a consequence, participate in the refocusing process. Focal spot size is no longer limited by diffraction but by the size of the receiving antenna itself.

An illustration of the advantages of this method is provided in Figure 2. A three-antenna TRM is used to transmit a color picture to a three-antenna receiving array. The original picture is encoded on three RGB (red-green-blue) color channels, with each corresponding figure represented by a bit series that gives the grey levels of each pixel on that particular channel. The simplest modulation is used (a positive pulse for bit 1, negative for bit 0) to create three bitstreams with a data rate of 50 Mbit/s each. The intended global data rate is thus 150 Mbit/s. Time reversal is used to focus each bitstream on one antenna, or one for each color of the receiving array. The three bitstreams are then decoded and mixed to reconstruct the image.

Communication experiments employed two kinds of receiving arrays. The first was ‘classical’ and consists of three dipolar antennas with a λ/30 spacing. The second was a microstructured antenna array analogous to the one previously described and shown in Figure 1. The image reconstructed with the classical array turns out to have lost its original colors. Indeed, sub-wavelength spaced antennas are strongly coupled, that is, they essentially receive the same signal. Hence, for each transmitted pixel, the three color values are identical. However, when the microstructured receiving array is used, the color streams focus independently at each antenna. The relative weights of the RGB components of each pixel are thereby preserved and the image is transmitted without major losses.

Our approach for sub-wavelength focusing of microwaves, which enables increases in the information transfer rate to a given volume of space, has been used to obtain focal spots as small as 1/30th of a wavelength.

Geoffroy Lerosey received his doctorate in physics from the University of Paris in 2006. He is currently a postdoc at the University of California, Berkeley. His research interests include time-reversal, metamaterials, and wireless communications.

Julien de Rosny is a researcher of National Center for Scientific Research (CNRS) and works at the Laboratoire Ondes et Acoustique (LOA) in Paris. He received his PhD in physics from the University of Paris in 2000, and his current research interests include signal processing, underwater acoustics, ultrasonics, wave propagation in complex media, time-reversal of waves, and propagation of electromagnetic waves in reverberating chambers.

Arnaud Tourin received his doctorate in physics from the University of Paris in 1999. He is Associate Professor at the École Supérieure de Physique et de Chimie Industrielles (ESPCI) and Assistant Director of LOA. His research concerns wave propagation in complex media and its applications in various fields, including ultrasound characterization of materials, seismology, wireless communications.

Mathias Fink, a professor at ESPCI, is a member of the National Academy of Science in France and Director of the LOA. His research focuses on the propagation of waves in various complex media and the development of numerous instruments based on that research, including applications in medical imaging and therapy, non-destructive testing, underwater acoustics, seismology, telecommunications and instrumentation.