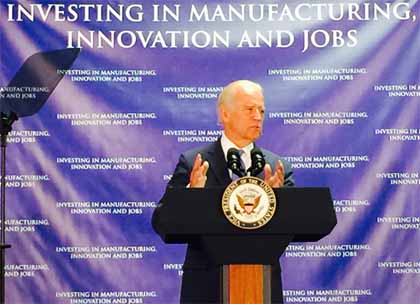 Leaders of SPIE, the international society for optics and photonics, were among invited guests from the photonics community who were on hand in Rochester Monday morning for the formal announcement by Vice President Joseph Biden of the new American Institute for Manufacturing Integrated Photonics (AIM Photonics).

A consortium led by the Research Foundation of the State University of New York (SUNY) of 75 key partners and 49 additional consortia members, including SPIE has won a three-way competition to establish the center which is being founded with a Department of Defense matching grant of $110 million. Already $610 million in public-private investments have been pledged.

Quoting Nobel Laureate Sir William Bragg, who said "Light brings us the news of the universe," the Vice President said that sentiment has never been more true than it is today.

He cited several important areas where photonics will have an impact, including communications, medicine, and defense. All the data centers in United States consume as much power as the entire state of New York -- but photonics offers the potential to reduce that a hundredfold, Biden said.

He said that a decline in U.S. manufacturing is turning around, citing recent surveys that indicate a growing optimism about investment in the United States, with $936 billion in foreign investment.

"Things are changing," Biden said, stressing the need to "build the most modern infrastructure in the world, and have the most skilled workforce in the world. We've gone from crisis to recovery, to on the verge of resurgence." He compared the establishment of the Integrated Manufacturing Institute to examples of bold economic moves from American history - the creation of DARPA, and the construction of the transcontinental railroad, as well as the Erie Canal, which gave Rochester the nickname "the young lion of the west."

"It's my pleasure to announce what's already been announced," he said, referring to last week's publication of the news in the Rochester media.

"This is one of the most promising areas we could move into, and I can think of no more promising place to do it than here in Rochester"

Photonics community members noted the concerted efforts to raise awareness that led to the establishment of the new institute.

"Today's announcement of an IP-IMI is the capstone of the National Photonics Initiative (NPI) and the result of three years of intense effort by volunteers and staff who have held countless meetings with government and private industry officials promoting the creation of this newest and largest institute within the President's National Network for Manufacturing Innovation (NNMI)," said Thomas Baer of the Stanford University Photonics Research Center. Baer is former chair of the NPI Steering Committee.

SPIE and The Optical Society (OSA) are Founding Sponsors of the NPI.

"Through the NPI and other efforts, our constituents and society leadership have worked diligently to raise the awareness of the importance of photonics as an enabling technology that has led to this announcement and the establishment of the AIP-IMI," said SPIE CEO Eugene Arthurs. "It represents tours of photonics labs and manufacturing facilities to see the technology development first hand, and many other conversations sharing data about the size and economic impact of the industry as well as personal and professional stories about how photonics enhances and even saves lives." 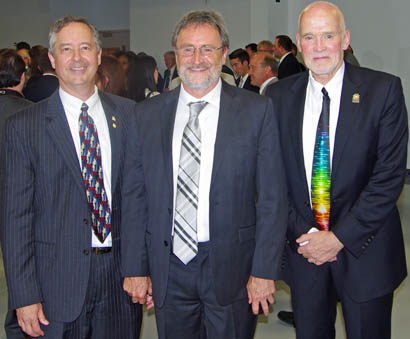 The magnificent images coming from the New Horizons mission to Pluto are one example of the fruits of photonics, Arthurs said. Another is the work in detecting individual cancer cells and using light to reveal how the living brain functions by researchers such as SPIE Fellow and Journal of Biomedical Optics Editor-in-Chief Lihong Wang of Washington University in St. Louis, reported today by NPR.

Photonics not only enables new technology applications in our lives and more advanced research, noted SPIE CEO Eugene Arthurs. It is also a major driver of the economy, and a vital factor in maintaining global leadership. With growing data storage needs and pressing challenges in sustainable energy and global medicine, the focus on integrated photonics of the new institute is very timely in that regard, and offers enormous potential for new capabilities.

"The silicon revolution required standards, as simple as silicon-wafer diameter, so that manufacturers, of wafers and all the fabrication equipment, could work productively together," Arthurs said. "The new AIM Photonics will lead diverse research toward the products of the future. If we pay more attention to retaining the benefits of the intellectual property generated at facilities such as the IP-IMI, the local regions and the country will benefit enormously."

"It has been gratifying to see so many of the major stakeholders in the photonic integration community join together to support this major federal initiative," said Thomas Koch, Dean of the College of Optical Sciences at the University of Arizona. "We all believe that the capabilities that will emerge from this endeavor will be instrumental in driving innovation and strengthening the US position in this vitally important technology. The applications that will be enabled by chip-scale, highly integrated photonics and electronics are boundless. "

Photonics industry executives from New York state hailed the selection of the proposal and said it will have far-reaching positive impact.

"This collaborative effort between New York and the DoD along with industry partners will produce cutting-edge technology, and that's what this country needs," said James Sydor, president of Sydor Optics in Rochester.

"The R&D that this photonics institute creates will filter down to new startup firms all over our region by creating jobs that will have lasting effects on our local and national economy," Sydor said.

Mike Mandina, president of Optimax Systems Inc. (Ontario, NY), said the institute will impact the regional economy and provide access to equipment that many companies cannot afford on their own.

"I also think it's going to strengthen the lines of study at the universities and bring world-class experts in the photonics space, and there will be products and developments that will go on regionally," he said.

"Our societies were not content upon the publication in 2012 of the National Academies report ‘Optics and Photonics, Essential Technologies for our Nation' in having a nice report, but were determined that this time the report would have national impact," said Tom Battley, Executive Director of the Rochester Regional Photonics Cluster and New York Photonics. "Thus the NPI became the effort for educating our delegations in Washington. The best and the brightest minds in optics and photonics science volunteered their time to lead the effort to tell the story of how important optics and photonics are to our nation."

Without that leadership, Battley said, "there would not be a photonics IMI. This is only the beginning. There is a lot to be done. We are grateful for the leadership for making it happen."

"We congratulate the State of New York and the Rochester and Albany communities where the IMI will operate, and we thank the Obama administration and congressional leaders for making today's announcement of a photonics-centered public-private Institute for Manufacturing Innovation a reality," Baer said. "The NPI stands ready to work with the IP-IMI and make available the programs and resources of its scientific society members to support and help ensure the institute's success.