An atmospheric monitor based on a microcantilever device coated with a reactive metal measures exposure to low levels of corrosive gases.
04 May 2007
Christopher O. Muller and William England
Many metal-containing devices and structures must function in corrosive atmospheres that can cause the devices to deteriorate over time. Corrosion can take the form of metal oxides or compounds that result from exposure to the effluent from industrial manufacturing processes.
One method for real-time monitoring of corrosion uses a quartz crystal microbalance (QCM) in which the crystal, coated with a reactive metal, is attached to an oscillator.1 As the metal degrades, the oscillation frequency of the crystal decreases. This frequency change can be converted into a corrosion film thickness corresponding to the severity levels described in Instrument Society of America (ISA) Standard S71.04-19852 and other comparable industry standards.
QCMs and surface acoustic wave (SAW) sensors operating as mass detection devices currently function as airborne corrosion monitors. Environmental classification standards and guidelines are based on copper and silver corrosion rates. These monitors are suitable for measuring and detecting certain levels of damage, but many applications, including semiconductor and microelectronics manufacturing, require more precise measurements. Although QCM and SAW monitors have demonstrated sensitivities to reactive species at levels as low as 1ppb, atmospheric monitoring could be used in many more applications if detection levels could be reduced by an order or magnitude or more.
We are developing a new type of monitor that potentially will have significantly lower detection limits for the same species targeted by QCM and SAW-based devices. The new monitor incorporates a nanostructure including at least one material (e.g., copper or silver metal) that is adapted to react to a corrosive atmosphere. The nanostructure can be in the form of a microcantilever, a nanotube, a nanoparticle, or a combination of these.
Technologies currently available could be used to produce a single chip incorporating cantilevers, analog processing, and even data transmission. Because of the sensor's small size, it is suited to microenvironments, a primary application area. Information about the corrosivity of an environment can provide the basis of warranties for electronic process and control equipment. Board-level or chip-level monitors based on microcantilevers could be used in almost any electronic or processor-based device.
We have created a microcantilever-based corrosion sensor. The device would employ (as a minimum) copper- and silver-coated microcantilevers in a distributed load configuration operating in dynamic mode. (Nanocantilevers were considered but ultimately rejected because microcantilevers are readily available, as are prototyping services.)
Several microcantilevers were evaluated. Figure 1 shows one design, a commercially available noncontact (vibration) mode atomic force microscopy (AFM) probe that operates at a resonance frequency range of 32–35KHz and has a minimum detectable mass density of less than 1ng. Solid-phase materials (e.g., copper) were applied to the microcantilever using a proprietary process.

Figure 1. The microcantilever corrosion sensor incorporates an atomic force microscopy probe.
We built a simple detection circuit including the microcantilever in Figure 1, an oscillator, a processor, an electrically erasable programmable read-only memory, and a power supply to provide current to the circuit components. The oscillator detected and/or received a signal associated with the reaction of the microcantilever to a corrosive gas.
The shift in resonance frequency due to mass loading can be calculated and was shown to be linear with the frequency change over the selected range.3 Figure 2 provides two examples of calculated frequency shifts versus mass loading.

Figure 2. Sample mass vs. resonant frequency for a microcantilever exposed to corrosive gas.
The sensor was exposed to a destructive gas (1–2ppbv) generated by permeation devices. Over time, this resulted in a mass gain as copper sulfide reaction products formed on the surface of the sensor. We converted this to corrosion film thickness in angstroms. Figure 3 provides an example of the data obtained. 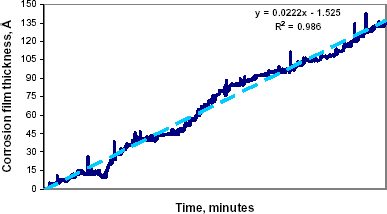