Multicolor pulsed illumination enables rapid capture of high-quality images suited to 2D and 3D digital image correlation.
12 May 2007
Ala Hijazi and Vis Madhavan
High-speed imaging is an essential tool in a wide variety of scientific and practical applications. Specific requirements (such as frame rate and exposure time, number of images in the sequence, image resolution and quality, and colored or gray scale) differ according to purpose. Different types of high-speed cameras are available commercially, and each certain applications. None, however, satisfies all requirements consistently.
In research fields that depend on extracting quantitative information from image sequences using digital image correlation (DIC)1 or similar techniques, quality is of particular importance. Our own application involves performing DIC on a series of microscopic images obtained at ultrahigh frame rates to map material deformation during high-speed metal cutting.2 On-site demonstrations of multichannel-gated intensified ultra-high-speed cameras showed that the quality of the images they produce is unsuitable for DIC. The problem is mainly due to image intensifiers that work as high-speed shutters. Clearly there is a need for a new type of ultrafast camera capable of recording a sequence of high-quality images at rates exceeding 1 million frames per second, especially for DIC.
We explored nonintensified cameras coupled with dual-pulse laser illumination, such as those used in particle image velocimetry (PIV) of high-speed flows. Known as dual-frame cameras, these devices can record two high-quality images in very quick succession (down to 100ns interframe separation) using a frame-transfer or interline CCD.3 The first image is captured just prior to the end of the first exposure, and the second one immediately after frame transfer is complete (see Figure 1). Pulsed illumination and controlled timing eliminate the need for the shuttering typical of image intensifiers. However, a dual-frame camera must wait tens of milliseconds for one pair of images to be read out to the imaging device memory before another can be recorded.

Figure 1. Camera exposures and illumination pulse timing for the dual-frame mode of operation. (Click to enlarge.)
A straightforward approach to scaling up the frame count would be to construct a multichannel system of multiple dual-frame cameras (sharing the same viewing axis via image splitters) synchronized to multiple dual-cavity pulsed lasers. However, in the dual-frame mode of operation, the second frame continues to be exposed for the entire time it takes to complete the readout of the first frame. Thus, the second frame of all but one of the cameras will be exposed multiple times and rendered useless. Moreover, the maximum achievable frame rate cannot exceed that obtainable by a single dual-frame camera (which is limited by the time needed for frame transfer). Otherwise, the images will be smeared.
We have devised a simple (patent-pending) solution that obviates these problems. The kernel of the idea is twofold. First, we use multiple light pulses of different wavelengths for illumination. Second, we employ dichroic (wavelength-selective) beam splitters in the imaging optics to route light of each wavelength to one particular camera intended to receive that wavelength, without unnecessary loss of light intensity. Figure 2 illustrates this concept. A single objective lens collects the light emanating from the target. Beam splitters 1 through n−1 transmit all wavelengths other than λ1 through λn−1, respectively. 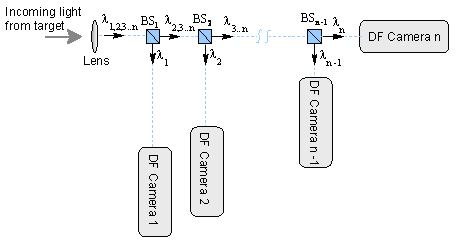 Figure 2. Schematic of one of the possible arrangements of beam splitters and cameras to illustrate the concept of our multichannel camera. BS: Beam splitter. DF: Dual frame. (Click to enlarge.)
This approach guarantees that both frames of each dual-frame camera will be usable. Furthermore, it makes it possible to bypass the limit on interframe separation imposed by the frame-transfer time. By triggering light pulses of different wavelengths λ1 through λn in sequence, a run of frames with arbitrarily small interframe separation can be recorded. The issue of multiple frame exposures does not arise: the dichroic beam splitters ensure that the first pulse of wavelength λ1 will expose only the first camera and the second pulse of wavelength λ2 only the second camera, but not any other camera, and so on.
This solution is quite general and applicable to various types of cameras and pulsed illumination sources. It enables nonintensified cameras to be combined together to capture a sequence of high-resolution images at extremely rapid framing rates. A prototype of this system, operating at rates exceeding 100MHz, was devised using four dual-frame cameras and four dual-cavity pulsed lasers.4 As shown in Figure 3, the system is built around a stereomicroscope (each pair of cameras shares one of the two stereo viewing axes) such that it can obtain a sequence of eight images for 2D DIC or four pairs of stereo images for 3D DIC. 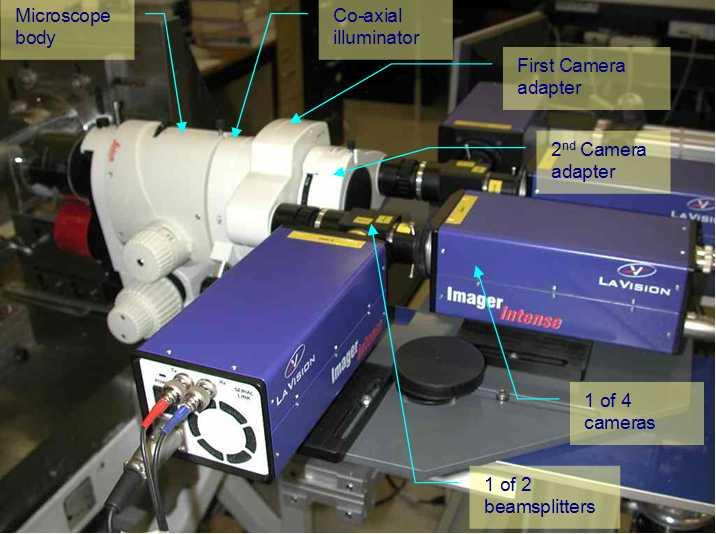 Figure 3. Picture of the ultra-high-speed camera built around a stereo-microscope.
With some additions, the system can be further enhanced to capture simultaneous visual and thermal images using laser-induced fluorescence.
We acknowledge financial support from the National Science Foundation (DMI-0116675) for acquiring the ultra-high-speed imaging system and (DMI-0421394) for extending the capability of the system to simultaneous visual and thermal imaging. The prototype is available in the Manufacturing Processes Research Lab at Wichita State University.5
Ala Hijazi
Department of Mechanical Engineering, The Hashemite University
Zarqa, Jordan
http://engineering.hu.edu.jo/mechanical/staff/Hijazi_pf.htm