The technique of passive mode locking that employs semiconductor saturable-absorber mirrors is widely used to generate picosecond and femtosecond laser pulses.5 Recently, however, a new technology for making saturable absorbers has emerged, based on carbon nanotubes (CNTs). CNTs show strong and tunable saturable absorption in the near IR and ultrashort recovery time.6 They also can be cheaply assembled into polymer composites and easily integrated into optical fiber communication systems. We have made a femtosecond-laser-written waveguide laser that operates in the very stable passive mode-locking regime by means of an innovative saturable absorber based on CNTs.

We used an innovative diode-pumped femtosecond oscillator, operating at a wavelength of 1040nm with a 350fs pulse duration to write the waveguide in an Er:Yb-doped phosphate glass (2% wt. of Er2O3 and 4% wt. of Yb2O3).7 A high-numerical-aperture objective focuses the femtosecond pulses inside the glass. We implemented a transverse writing configuration in which motorized stages translated the sample perpendicular to the laser beam at 50–100μm/s (see Figure 1). We adopted an optimized set of writing parameters (885kHz repetition rate, 250nJ energy per pulse) to fabricate a 36mm-long waveguide. Insertion losses from this waveguide to standard telecommunications fibers were as low as 1.9dB.

CNTs are produced by laser ablation.8 We used high-power ultrasonication to disperse purified CNTs in water with sodium dodecylbenzene sulfonate as a surfactant. The residual CNT bundles are removed by microfiltration, and the resulting solution is then mixed with polyvinyl alcohol (PVA) and dried at room temperature to obtain a 50μm-thick freestanding film. The film has a broad absorbance spectrum around 1.5μm—as shown in Figure 2(a)—with a 0.36 peak (i.e., 1.52dB absorption, of which 0.6dB is saturable), a laser damage threshold >600MW/cm2, a saturation intensity of ∼80MW/cm2, and a recovery time shorter than 1ps. By sandwiching such a film between two FC- or PC-style connectors with index-matching fluid at both fiber ends, we packaged a fiber-pigtailed CNT-PVA mode locker: see Figure 2(b). 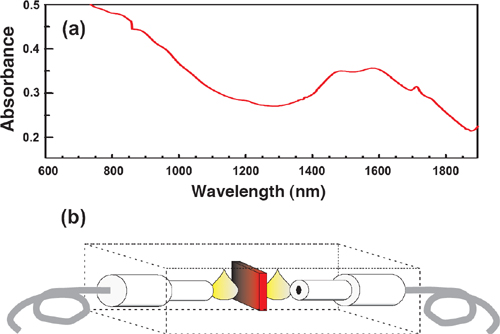 Figure 2. (a) Absorbance spectrum of the carbon nanotube (CNT) film peaks near 1.5μm. (b) A freestanding film of CNTs (red) is sandwiched between fiber connectors with index-matching fluid (yellow) to create a fiber-pigtailed mode locker.
The mode-locked waveguide laser cavity

Figure 3 shows a schematic of the mode-locked waveguide laser in a ring cavity configuration that incorporates both the 36mm-long active waveguide and the fiber-pigtailed CNT-PVA mode locker.9 Two 976nm laser diodes, which provide a total of 480mW incident power, are coupled to the waveguide in a bi-propagating pumping scheme by wavelength division multiplexers (WDMs). Previous gain measurements on this sample, performed at 1.5μm, showed a net gain in the whole C-band, with a 7.3dB peak value at 1535nm for an incident pump power of 460mW. Five percent of the intracavity radiation is coupled out of the ring resonator. Unidirectionality of light propagation in the ring is imposed by an optical isolator. 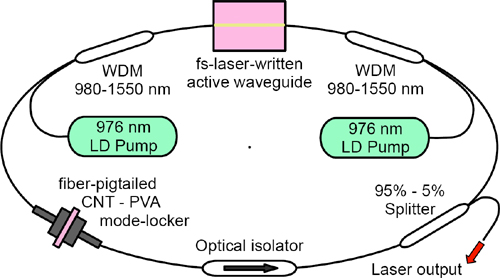 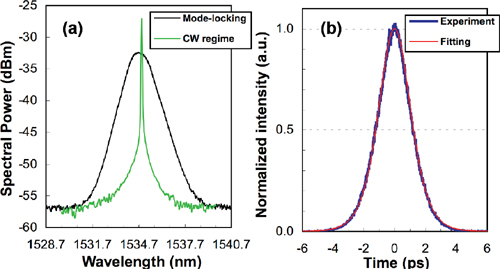 Figure 4. (a) Laser output spectrum in continuous wave (CW) and mode-locking regimes. (b) Autocorrelation trace of the mode-locking pulse.

Figure 4(a) shows the laser output spectrum. Continuous-wave (CW) laser action starts at 450mW incident pump power, and self-starting single-pulse stable mode locking is observed just above the laser threshold. The laser central wavelength in the mode-locking regime is 1535nm, with an oscillating bandwidth (at –3dB) of 1.6nm. Using an autocorrelator, we estimated the pulse duration to be about 1.6ps, resulting in a time bandwidth product of 0.329, which provides fairly good agreement with the 0.315 value for transform-limited sech (hyperbolic secant)2 pulses. The repetition rate of this cavity was 16.7MHz, but a much higher repetition rate can be obtained using a linear cavity in which the saturable absorber is placed directly on the waveguide facet. As an example, according to the saturation intensity of the nanotube absorber, 1GHz operation could be feasible with an intracavity average power of about 100mW. Such a power level was already demonstrated in similar waveguide lasers operated in CW.7

We demonstrated passive mode locking of a femtosecond-laser-written waveguide laser by using a saturable absorber based on CNTs. Our work expands the capability of femtosecond laser writing for manufacturing complex photonic devices. An upgraded version of this technology, whereby a CNT absorber is incorporated into a monolithic laser structure, could provide very compact mode-locked laser sources with gigahertz repetition rates.

Giuseppe Della Valle received the Laurea degree in electrical engineering from the Politecnico di Milano in 2001. In 2006, he received his PhD degree in physics from the same institute, where he is currently an assistant professor of general physics. His research interests concern waveguide amplifiers and lasers based on doped glass substrates, operating in the near IR for telecom and metrological applications.

Giulio Cerullo received the Laurea degree in electrical engineering from the Politecnico di Milano in 1988. From 1989 to 1991, he was with Baasel Lasertechnik GmbH, Starnberg, Germany, developing laser systems for medical applications. Since 1999, he has been an associate professor of general physics at the Department of Physics, Politecnico di Milano. His current scientific interests concern generation of few-optical-cycle pulses, ultrafast spectroscopy, and optical waveguide writing by ultrashort pulses.

Paolo Laporta received the Laurea degree in nuclear engineering from the Politecnico di Milano in 1979. From 1980 to 1985, he was a research associate at the Center for Quantum Electronics and Electronic Instrumentation (CEQSE-CNR), Milan, Italy. From 1986 to 1991, he was an associate professor of optoelectronics at University of Rome Tor Vergata, Italy. Since 1999 he has been a full professor of optics at the Politecnico di Milano. His current research activities include waveguide lasers and amplifiers, integrated optics, tunable solid-state lasers in the near IR, chirped fiber Bragg gratings, and photonic devices.

Roberto Osellame received the Laurea degree in electrical engineering from the Politecnico di Milano in 1996, and his PhD degree in physics from the Politecnico di Torino, Turin, Italy, in 2000. Since 2001, he has been a research associate with the Institute of Photonics and Nanotechnologies (IFN-CNR), Milan. His research interests include integrated all-optical devices on nonlinear crystals, and femtosecond laser writing of active and passive waveguides on glasses.

Uwe Morgner received his diploma degree in physics from the University of Hannover in 1994. From 1998 to 1999, he was at the Massachusetts Institute of Technology, Cambridge, USA, working on few-cycle pulse generation and optical coherence tomography. From 1999 to 2002, he was with the High-Frequency and Quantum Electronics Laboratory, University of Karlsruhe, working on ultrashort pulse generation. During 2002–2004, he was a research group leader at the Max Planck Institute for Nuclear Physics, Heidelberg. He is currently a professor of physics at the Quantum Optics Institute of the University of Hannover.

Aleksey G. Rozhin received his MS degree in physics and optoelectronics from Kiev National University, Ukraine, in 1998, and his PhD degree in solid-state physics from the Institute of Semiconductor Physics, National Academy of Science of Ukraine, Kiev, in 2001. Since 2005, he has been with the Department of Engineering, University of Cambridge. His research interests include the development of nonlinear optical materials, fiber lasers, and devices and novel photonics materials for applications in ultrafast optoelectronics.

Andrea C. Ferrari gained his PhD in electrical engineering from Cambridge University in 2001, following a Laurea degree in nuclear engineering from the Politecnico di Milano. He is a university lecturer in electrical engineering at Cambridge and holds a Royal Society University research fellowship at the Cambridge Centre for Advanced Photonics and Electronics, Cambridge. His research interests cover nanomaterials growth, modeling, characterization, and devices, and in particular the growth and characterization of diamond-like carbon, and nanotubes and nanowires for applications in optoelectronics and photonics.