Optical interferometry reveals tiny motions in live cells that convey information about membrane properties and disease.
04 February 2007
Gabriel Popescu
The stiffness of cell membranes is a crucial functional property of cells and an indicator of disease. An imaging technique called quantitative phase imaging (QPI) allows high-resolution observation of the stiffness of living cells and could eventually lead to enhanced treatment and diagnostics for conditions such as malaria, sickle-cell anemia, and cancer. This technique is being developed by scientists at the G. R. Harrison Spectroscopy Laboratory at MIT.
Unlike most current methods for studying cells, QPI enables monitoring of living cells during time intervals from milliseconds to days. That makes it an excellent method for studying cellular processes. Eventually, it should even be possible to create 3D movies of the internal workings of cells.
QPI reveals every vibration of red-blood-cell membranes. That, in turn, makes it possible to infer the elasticity of the cells, which is crucial for their function: they need to be able to fold and squeeze through tiny capillaries. QPI has revealed the membrane tension of red blood cells,1 previously measurable only by contact techniques such as micropipette aspiration. This kind of information is relevant to infection with malaria, for example, which significantly increases the stiffness of red blood cells. Other diseases coming under the QPI microscope at MIT are alcoholism and sickle-cell anemia. QPI promises to provide both a better understanding of these diseases and a noninvasive tool for drug testing. Eventually the technique could form the basis of a high-throughput screening system for various blood-related disorders. 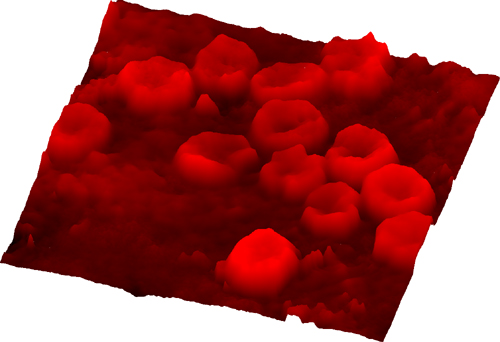 Figure 1. A droplet of blood, as seen by quantitative phase imaging. The characteristic ‘Life Savers’ shape of red blood cells can be quantified with nanometer accuracy.
Scientists have long been able to peer into cells using electron microscopy, which offers a much higher magnification than a traditional light microscope. But because electron microscopy can only be used on cells that are dehydrated, frozen, or treated in other ways, it cannot be used to view living cells. QPI requires no sample preparation or contrast agents, and can be fully automated.
QPI is based on the phenomenon of optical interference. It takes advantage of intracellular density differences caused by subcellular structure. Laser light is passed through the cell and interferes with a reference light wave outside the sample, resulting in a pattern that offers nanometer-scale images of individual cells. Usually such interferometers are highly sensitive—even breathing near the apparatus can be disruptive—and thus very difficult to work with. To overcome this, our team developed a special interferometer in which the two light beams cancel each other's noise.2 This approach is very effective: for the first time, red-blood-cell membrane fluctuations can be quantified with nanometer-level accuracy.
Using QPI images, we can numerically generate other types of images—e.g., phase contrast, or differential interference contrast—that are familiar to clinicians. Users will have the comfort of traditional imaging but will also be exposed to a new, QPI-specific imagery that enables nanometer-level structures and motions to be quantified. When combined with fluorescence microscopy, QPI can extract the information associated with specific molecular structures.3 We believe that this unique ability will have broad application to cell membrane biophysics and beyond.
Gabriel Popescu
Spectroscopy Laboratory,
Massachusetts Institute of Technology
Cambridge, MA
http://www.mit.edu/~gpopescu/
http://web.mit.edu/spectroscopy/
Gabriel Popescu received BS and MS degrees in physics from the University of Bucharest in Romania in 1995 and 1996, respectively. In 2002, he received a PhD in optics from CREOL/School of Optics (now College of Optics and Photonics). Since then he has been a postdoctoral associate at the Spectroscopy Laboratory at MIT, working on quantitative phase imaging of live cells.
References:
1. G. Popescu, T. Ikeda, K. Goda, C. A. Best-Popescu, M. Laposata, S. Manley, R. R. Dasari, K. Badizadegan, M. S. Feld, Optical measurement of cell membrane tension, Phys. Rev. Lett. 97, pp. 218101, 2006.
2. G. Popescu, T. Ikeda, R. R. Dasari, M. S. Feld, Diffraction phase microscopy for quantifying cell structure and dynamics, Opt. Lett. 31, pp. 775-777, 2006.
3. Y. K. Park, G. Popescu, K. Badizadegan, R. R. Dasari, M. S. Feld, Diffraction phase and fluorescence microscopy, Opt. Express 14, pp. 8263, 2006.
Recent News
Smart glass has a bright future
Publications
SPIE Luminary John Pendry
Publications
Nonlinear wave mixing facilitates subwavelength imaging
Publications