The two-photon-polymerization process may be used to create medical devices such as middle ear prostheses that are specific to individual patients.
04 May 2007
Boris Chichkov
Patients and surgeons alike demand prostheses that improve function for longer periods of time. For example, mass-produced implants are available in several shapes and sizes, but these designs do not take individual patient anatomy into account. One way to lower the cost and increase the success of medical prostheses involves the use of rapid prototyping technologies in which imaging is used to generate patient-specific prostheses. These implants possess design features such as size, weight, and geometry that are particular to a specific patient.
We use the two-photon-polymerization (2PP) technique to rapid-prototype various medical devices, including microneedles for transdermal drug delivery, ossicular (ear bone) replacement prostheses, and tissue engineering scaffolds. The 2PP process involves both temporal and spatial overlap of photons, leading to nonlinear absorption in a highly localized volume. Absorbed photons induce chemical reactions between starter molecules and monomers within a transparent medium.1 This causes polymers to form. In the case of liquid materials, such as Ormocers,1 which are organically-modified ceramics, polymerization results in localized solidification of the material. The quadratic intensity dependence of the two-photon-absorption probability and the well-defined polymerization threshold allow one to achieve resolutions of less than 100nm in polymerized structures. The light/matter interaction region is confined within the focal volume. By moving the laser focus within such photosensitive material, a trace of polymerized material is produced. Therefore, one can fabricate any computer-generated 3D structure.
Figure 1 shows a schematic of the experimental setup used for 2PP processing. The spectrum analyzer allows the laser emission spectrum to be continuously monitored. The combination of a waveplate and a polarization-sensitive beamsplitter is used to adjust the transmitted laser power. The function of the acousto-optical modulator (AOM) is to control the radiation on/off regimes. The telescope expands the beam to completely fill the objective aperture. A CCD camera enables online observation of the process.

Figure 1. Schematic of the experimental setup used for two photon polymerization (2PP) processing. Femtosecond (fs) laser pulses are focused into a volume of the photosensitive resin. The structures are fabricated by moving the laser focus in the xy plane using a galvo scanner. The sample is mounted on a set of linear positioning stages, allowing the sample to be positioned in 3D. AOM: Acousto-optical modulator.
The 2PP process may be used to create 3D devices from hybrid materials such as Ormocers, which contain strong covalent bonds between the inorganic and organic components. During synthesis of this material, the inorganic components (e.g., alkoxysilane precursors) crosslink and form an inorganic network through the condensation of organically-modified silicon alkoxide groups. Light, thermal, or redox processes can crosslink the organic components (e.g., methacrylate groups). Crosslinking between the inorganic groups and the organic groups provides Ormocers with exceptional chemical and thermal stability.
The 2PP technique provides several advantages over conventional processing in the scalable mass production of medical devices.2 First, the raw materials are widely available and inexpensive. Second, 2PP equipment can be set up in a conventional clinical environment that does not contain cleanroom facilities, such as an operating room. Third, 2PP fabrication of ossicular replacement prostheses is a rapid, single-step process, as opposed to conventional multiple-step techniques.
Microneedles are a promising option for drug delivery.3 By reducing the dimensions of the device, damage at the injection site and pain to the patient may be diminished. The flexibility of the 2PP process allows rapid fabrication of microneedles with different designs.4 For example, the best-known blood-drawing device created by nature is the mosquito fascicle. The microstructures on the sides of mosquito needles are partly responsible for the ease of insertion into the skin. Figure 2 presents scanning-electron-microscope images of a hollow microneedle array and a microneedle that mimics the mosquito fascicle, both fabricated by 2PP of Ormocer. In addition, we have produced off-center microneedles by adjusting the position of the channel relative to the central axis.5 During in vitro studies, Ormocer microneedle arrays penetrated porcine tissue surfaces without fracture.5 Furthermore, cell proliferation studies suggest that Ormocer® materials processed using 2PP do not impair cell viability or cell growth processes.4,5 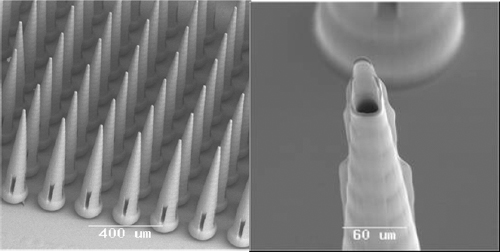