Reflective devices based on the optical principle of a lobster eye produce wide-angle images over a broad energy range, from hard x-rays to long-wave IR.
04 April 2007
Victor Grubsky, M. Gertsenshteyn, and T. Jannson

The Holy Grail of optical engineering is a lens that produces high-quality images regardless of the direction of an incident beam or the wavelength of light. Such a lens can be effectively used in circumstances when the location and the wavelength of the source are not known. It could also replace multiple instruments in applications, such as space missions, that observe multiple spectral regions and are sensitive to the total weight or cost of the equipment.

Common refractive optics suffer from material dispersion, which varies the index of refraction with wavelength and therefore affects the imaging characteristics. The detrimental effects of the dispersion on the image quality can be minimized by constructing lenses using multiple optical materials with different dispersive properties. However, this makes such lenses expensive and heavy. Achieving a wide field of view is also difficult because of image distortions.

Conventional reflective optics (curved mirrors) can provide wavelength-independent imaging within a specific region of spectrum. However, such optics usually have a limited field of view due to the need to place a detector in front of the mirror, which interferes with the incident beam.

To solve this problem, we developed reflective optics that produce an image on the side opposite to the source, just like a conventional lens. Such a lens is made of a large number of dispersion-free mirror surfaces, allowing wavelength-independent imaging. In addition, the simple structure of the lens achieves a wide field of view with nearly omnidirectional performance.

Figure 1. Structure and image formation in a natural lobster eye. The square cross-section of the channels is essential for focusing rays.1
Nature inspired the optical principle of such lenses. Eyes of lobsters and other crustaceans (shrimps, prawns, crawfish, etc.) consist of many tiny channels with reflective walls and almost perfectly square cross-sections. These cover a nearly spherical surface on a lobster eye, with their axes converging toward the center of the sphere. The reflections inside these channels focus a beam into a spot located roughly halfway toward the center of the eye (see Figure 1). A lobster eye focuses light equally well for any direction of the incoming beams (within the physical aperture of the eye), making it an omnidirectional imaging device with a very large angle of view. The lobster-eye-inspired lens developed by Physical Optics Corporation (POC) employs the same general principles, but is usually constructed of two sets of intersecting plates with reflective coatings. The materials of the lens elements and the coating depend on the intended application.
As we reported earlier, the lobster-eye lens has technology proved to be particularly useful for focusing x-rays.2,3 Unlike visible light, x-rays are hard to refract because the refractive indices of most materials at typical x-ray energies (>1keV) are very close to unity. Consequently, x-rays do not deflect significantly on crossing a boundary between two materials. However, total external reflection from a boundary is possible for x-rays, provided that the surface is very smooth (roughness <1nm rms) and that the rays strike the surface at a small grazing angle (typically <1°). For this reason, a lobster-eye lens designed for focusing x-rays typically has long, very narrow polished channels, with an aspect ratio of 100:1 to 1000:1. The channel walls are usually covered with gold, iridium, or other noble metals, which enhance x-ray reflectivity. This technology focuses photons with energies up to ~100keV (see Figure 2). Several x-ray telescopes and imaging systems based on the lobster-eye principle are in development. POC is developing such technologies for underground explosive detection, cargo inspection, and medical imaging.

Coincidentally, metals are also known for their high reflectivity in the UV, visible, and IR (up to a wavelength of ~10µm) spectral ranges. Therefore, it is possible to construct a lobster-eye lens for efficient, omnidirectional imaging over a broad spectrum of photon energies, from long-wavelength IR (10,000nm or 0.1eV) to hard x-rays (0.01nm or 100keV). Because such a lens will employ only reflections to form an image, its focal point will remain fixed throughout this huge energy range, ideal for imaging objects with a broad emission spectrum, such as stars. 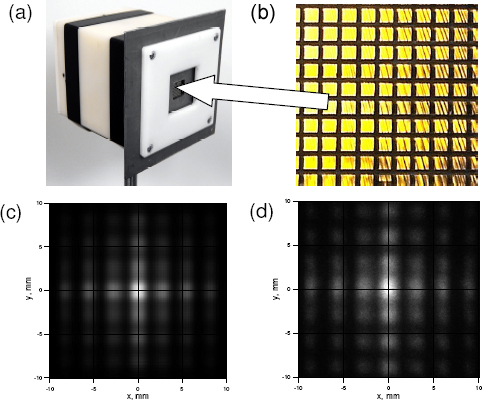 Figure 2. Physical Optics Corporation x-ray lobster-eye lens (a) made of gold-coated monocrystalline silicon wafers, which are visible in the magnified image (b). The channel period is 0.9mm. Simulated (c) and measured (d) focused images of the x-ray point source produced by this lens for 10–20keV photons. 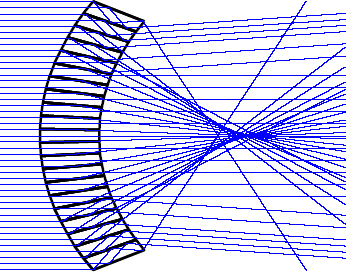 Figure 3. Aberrations of a lobster-eye lens are shown here by doing ray-tracing in Zemax through the center slice of a lens (the figure was squeezed slightly in the vertical direction to save space). Channel dimensions are 10×10×30mm, lens radius = 200mm, and the incident beam is parallel.

Figure 4. Central part of the images of a point light source produced by lobster-eye lenses with completely reflecting mirrors (left) and with absorbing sections at the ends of channels (right). For the lens with completely reflecting channels, the following parameters were chosen: lens radius = 200mm, number of channels = 59×59, channel angle = 0.02rad, channel length = 8mm, wall thickness = 0.5mm. The design with an absorbing section was identical, except for a 4mm absorbing extension at the end of each channel (in addition to the 8mm reflective section). Spot darkness is proportional to the intensity.
However, if a simple metallic mirror is used, aberrations may cause problems for obtaining high-quality images with wide-field-of-view lenses, as Figure 3 demonstrates.4 This can be overcome by restricting the effective aperture of the lens to eliminate the problem rays, so that only a relatively small fraction of the lens is involved in focusing a beam incident in any particular direction. In this case, the operation of a lens in the visible or IR spectrum becomes very similar to that for x-rays, with the light effectively exhibiting a critical angle for reflection from the mirror surfaces. To achieve that, the real part of the refractive index of the mirror should be <1. This condition is satisfied for some materials at IR wavelengths, for example, alumina.4,5

Another method of aberration suppression can be borrowed from nature. In the eye of a lobster, each channel contains a section with light-absorbing walls, located just before the output aperture. It is clear from Figure 3 that such absorbing sections will block the light entering the channels at high angles and those that experience multiple reflections should reduce the aberrations. Figure 4 shows the simulation results for a lobster-eye lens design with an absorbing section. Comparing the two images shows effective suppression of rays around the central spot by the lens with an absorbing section, which increases the contrast of the image.

In summary, we have presented a technology for omnidirectional, omnispectral imaging using reflective focusing optics based on the principle of a lobster eye. We are working on x-ray and IR versions of such devices with a spatial resolution of ~0.5mm. Our next step will be to scale the lens geometry down to achieve finer resolution, and to fabricate lenses capable of imaging all the way from x-rays into the IR.