A regular array of nanoparticles, deposited from a colloidal solution, are used as a nanomask to fabricate periodic metallic nanostructures that can then be replicated in polymer.
23 May 2007
Mohammed Ashraf, Anoop Sreenath, and Franck Chollet

We need cheap, fast ways of producing of high-quality periodic nanostructures for use in consumer products for telecommunications (photonic crystals), data storage, and biosensing.1 The main method currently used for nanoscale patterning is electron-beam lithography (EBL), a high-resolution nanowriting technique that involves literally scanning an electron beam across a sensitive material. However, the technique is serial, which means it has a slow processing speed: this leads to high production costs and so makes EBL an unlikely contender for batch fabrication of nanostructures.

An approach that looks more promising involves using standard micro-fabrication equipment and achieving the nanopatterns through the self-ordering behavior of the physical elements involved. Nanosphere lithography in particular makes use of the formation of single layers of particles self-organized through the force of surface tension to obtain nanoscale patterns.2 In our work, the monolayer acts as a mask, and the gaps between the orderly array of nanospheres are filled with a metal suitable for building nanopillars that will be used as master mold for replication during nano-imprinting. The combination of this technique with standard micro-photolithography allows the nanostructure arrays to be confined to well defined regions or spots (see Figure 1). 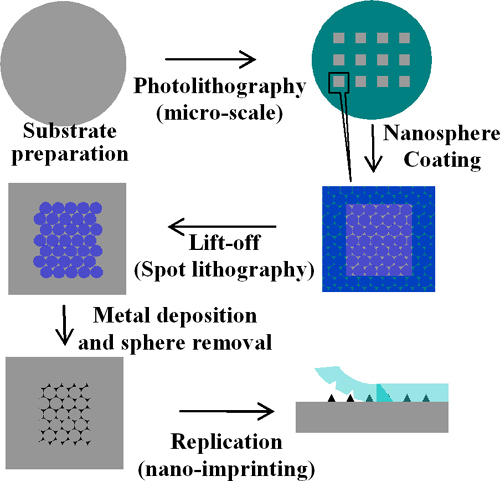 Figure 1. Process steps for the fabrication of a nanopatterned metallic mould and its use for replication.

Different techniques, such as spin coating, drop coating, and dip coating, were used to coat the surface with the 650nm-diameter polystyrene spheres. Our goal was to obtain a monolayer without resorting to an hour-long sedimentation process that greatly reduces the value of the technique for practical purposes. Drop coating was performed at different angles to control the evaporation rate and hence obtain better uniformity. The polystyrene sphere suspension was diluted to 0.22%-0.50% by weight and it was observed that reducing the nanosphere concentration facilitates the formation of monolayer (see Figure 2).

Figure 2. Definition of sphere confinement region by spot lithography and enlarged view of a monolayer.

The formation of the nanopattern is obtained by evaporating the metal through the void left between the nanospheres. An interesting feature of this process is that it achieves scale reduction: the void is much smaller than the sphere. Actually the void area is given by:

where d is the sphere diameter (see Figure 3). When the metal deposited into the gap is melted to form circular structures, their diameter will be 4.4 times smaller than that of the nanosphere. With the 650nm nanospheres, the diameter of the metallic nanostructure after melting would be ∼150nm. 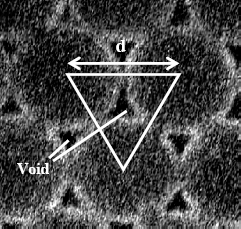 Figure 3. Micrograph of the voids between the nanospheres.

Different metals were deposited using sputter and e-beam evaporation. We varied the thickness of the deposited metals to obtain different nanostructure heights, but long depositions resulted in irregular patterns due to the closure of the voids between the spheres. After this process was finished, the spheres themselves were removed by sonication in methylene chloride solution. Figure 4 shows the metallic nanoparticles over a large area after the removal of nanospheres. During metal deposition, the sputter gives more flexibility in the choice of materials and also results in better deposition uniformity. However, the particles that come in with a large angle of incidence during sputtering allow the metal to reach below the sphere and so produce a continuous mesh, see Figure 4(a). E-beam evaporation, on the other hand, is a more unidirectional process and results in disconnected metallic structures, as shown in Figure 4(b), which also simplifies the removal of the nanospheres. 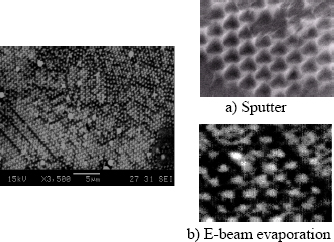 Figure 4. Metal nanostructure on large surface and micrograph of structure obtained with (a) sputter deposition and (b) e-beam evaporation.

The replication of the metal mold in a polymer layer is the final step, making possible the production of a large number of nanopatterned structures. The spun PMMA (poly methyl methacrylate) layer is imprinted at 200°C under a pressure of 200MPa (Figure 5). The imprinted nanostructures dimensions match the metallic mould structures closely.

Figure 5. Localized replication of arrayed nanostructures on a PMMA layer.

We have shown a simple fabrication process that allows us to obtain localized regular arrays of metallic nanostructures, which could be successfully replicated in polymer. Although we have demonstrated the feasibility of the technique, the routine replication of nanostructures onto PMMA needs more work: although it will be important to maintain the amazing simplicity and low cost of the technique as we progress.