Development of a natural 3D display

High-density directional displays that project a large number of images combat visual fatigue.
04 May 2007
Kengo Kikuta and Yasuhiro Takaki
We have developed a high-density directional (HDD) display technique1 that solves the visual fatigue problem caused by the accommodation-vergence conflict in conventional 3D displays. Specifically, in most non-holographic 3D displays, the eye converges on an virtual object that is one distance away while focussing on a display that is at a different distance: this mismatch can be uncomfortable for the user.
In an HDD system a large number of images are displayed in different directions. These images are orthographic (close to non-converging) projections of an object, each taken from a different directions. When displayed in the appropriate directions with nearly parallel rays, the object is virtually reconstructed. In contrast, so-called multi-view (MV) displays use parallax images: perspective projections of an object observed from particular viewpoints (as opposed to view planes). When the number of ray directions in an HDD increases and the ray-angle pitch decreases, the divergence of rays decreases, thereby increasing the depth of field (DOF) of an imaging system. Observers can focus on 3D images displayed in the enhanced DOF range2 where accommodation-vergence conflict does not occur. The technique also offers very smooth motion parallax.
As shown in Figure 1, we have constructed several prototype HDD displays,3–8 with 30 to 128 rays and a resolution from QVGA to SVGA. There are two types: projection and thin. In this article, we report the details of our most recently developed HDD projection display8 with 128 ray directions and SVGA (800×600) resolution.

Figure 1. Generations of prototype HDD displays.
Figure 2 illustrates the way a projection-type system works. It consists of an array of 2D displays, an array of lenses, an array of apertures, a common lens, and a vertical diffuser. A number of afocal imaging systems are multiplexed. One of these consists of a liquid-crystal display (LCD) panel, a lens, an aperture, a common lens, and a vertical diffuser. Note that all afocal imaging systems have different horizontal positions. Each directional image is displayed on an LCD panel and imaged onto the vertical diffuser. The existence of the apertures limits the ray propagation directions so that all images are displayed with rays that are nearly parallel. 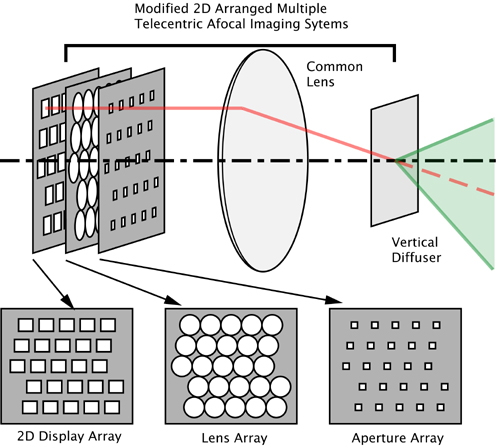 Figure 2. This 3D display uses multiple afocal imaging systems aligned in a modified 2D array.
Because each optical system has a different horizontal position, each directional image is displayed in a different horizontal direction. However, the difference in the vertical display direction, due to the imaging system's vertical position, is canceled by the vertical diffuser. The modified 2D arrangement enables a large number of imaging systems to be contained in a compact space. Use of the afocal imaging systems also enables the generation of 3D images with small defocusing even when those images are displayed separately from the display screen (the vertical diffuser).
The 128-directional SVGA display consists of 128 SVGA liquid-crystal-on-silicon (LCOS) devices with field-sequential (time-multiplexed) color. A red, green, and blue light-emitting diode (RGB LED) is used as a light source. All 128 projectors are aligned in the modified 2D arrangement described above, and the images are displayed in different horizontal directions with a horizontal angle pitch of 0.28°. The horizontal viewing angle is 35.7°, and screen size is 12.8 inches. The display is controlled by a cluster of 16 personal computers. In order to correct distortion caused by optical aberration, the images displayed on the LCOS devices are pre-distorted using correction tables. Figure 3 shows photographs of 3D images produced using this 3D display.