An optically pumped semiconductor laser with two chips produces nearly twice the power of a single-chip device.
04 May 2007
Li Fan and Mahmoud Fallahi
Optically pumped semiconductor vertical-external-cavity surface-emitting lasers (VECSELs) are attractive due to their high power, excellent beam quality and large wavelength tunability.1 However, overheating in the active region limits their output power.2 Conventional power scaling methods are based on increasing the pump spot size and keeping the pump irradiance constant. However, amplified spontaneous emission in the epitaxial plane represents another major VECSEL power-limiting mechanism, especially for a large pump spot.3 In addition, fluctuations in local quantum well width and composition as well as defects may result in increased crystal inhomogenities when the pump area is large, resulting in inhomogeneous broadening of the VECSEL spectral linewidth.4
Laser beam combining represents an effective technique for power scaling. Spectral beam combining (SBC) of VECSELs using volume Bragg grating technology can maintain nearly diffraction-limited beam quality, but the combined output is an incoherent multi-wavelength beam.5 The most sophisticated approach is coherent beam combining (CBC), where the lasers are artificially phase-locked with each other, and the electromagnetic fields of their beams combine coherently. While theoretically sound, CBC requires complex phase-locking loops, extremely difficult to implement and maintain in practice.6
We have developed an effective and coherent power-scaling approach, the multichip VECSEL. Compared to a single-chip system, it offers several potential advantages. First, heating is distributed over several chips. The thermal roll-over is delayed as less pump power is required on each chip and more is available to improve power scaling. Second, the multichip VECSEL has a much higher round-trip small signal gain than its single-chip counterpart. As a result, we can use an output coupler with low reflectance to increase the slope efficiency of the laser. Finally, the output of a multichip VECSEL is a stable coherent beam with a good beam quality that is easily controlled by the cavity.
To prove the concept, we aligned two 970nm. VECSEL chips in a W-shaped cavity (see Figure 1). The chips served as cavity folding mirrors, reflecting more than 99.9% of the incident radiation from the 25 pairs of AlGaAs/AlAs layers that formed a distributed Bragg reflector behind the quantum wells. The InGaAs compressively strained quantum wells (14 on one chip and 10 on the other) were spaced such that each quantum well could align with an anti-node of the cavity standing wave. Each chip had a quarter-wave anti-reflection coating (reflectivity less than 1% at the 970nm laser wavelength, and less than 3% at the 808nm pump wavelength) on its surface. Both chips were optically pumped with 808nm light from diode lasers, but equipment limitations prevented their symmetric pumping at higher powers. The diodes first applied the same power density to both chips until one diode reached its maximum power (∼20W). Afterwards, since the other diode could go higher, its power was increased to 40W, with the output of the first remaining constant at its limit.

Figure 1. Schematic diagram of a two-chip vertical-external-cavity surface-emitting laser with a symmetric W-shaped cavity. HR: high reflectance. ROC: radius of curvature. (Relative dimensions not to scale)
For comparison purposes, each VECSEL chip was first characterized in its own linear resonator. Both chips were then aligned in a common resonator, as illustrated in Figure 1. Results showed that the two-chip resonator produced almost twice as much power as either individual chip did in its own resonator (Figure 2). The two-chip resonator showed a definite roll-over at the upper end, indicative of overheating in one or both chips. We believe that only one chip —the one pumped at 40 W— overheated, and that the roll-over could be avoided by pumping both chips with the same power. 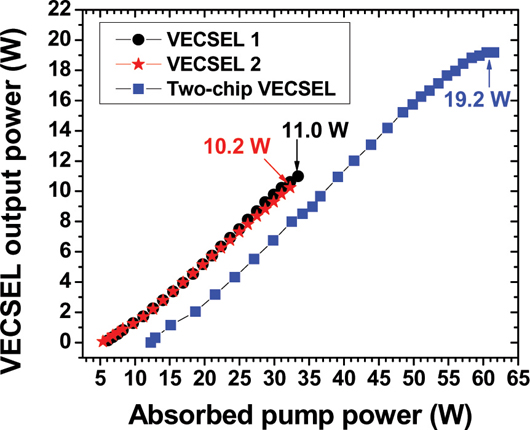 Figure 2. The output power of two single-chip and one two-chip vertical-external-cavity surface-emitting laser (VECSEL) systems vs. absorbed 808nm pump power. The roll-over at the upper end of the two-chip trace could probably be avoided by pumping both chips at the same power.
The beam quality of the two-chip resonator was excellent. The measured M-squared value was a perfect 1.0 at low pump powers, increasing to about 2.2 at the highest powers (Figure 3), where the beam assumed a TEM01 mode profile. 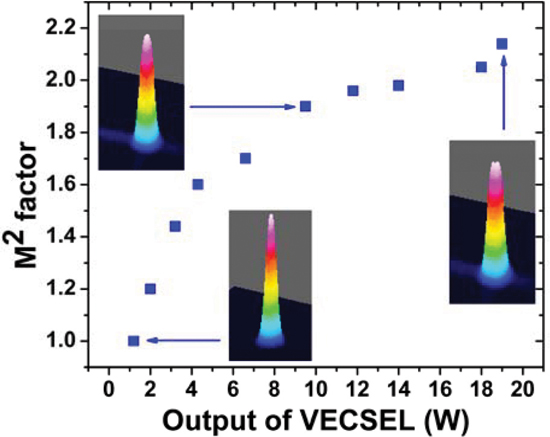